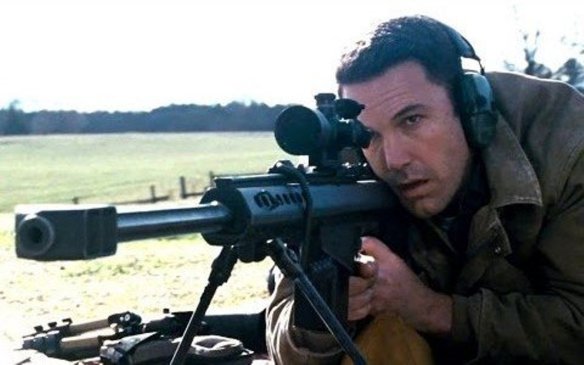 Ben Affleck sets his sights on those who criticized his casting as Batman.

Most people have an idea of autism that is decidedly out of step with reality. The truth is that there all sorts of different types of autism and all sorts of different types of autistics. Some are low functioning, unable to take care of themselves and who are requiring of supervision. These are generally the types of autism that we tend to picture when we think about autism at all. Others are high functioning, some to the point where you wouldn’t know they were autistic if they didn’t tell you. The myth about autism that is most pervasive and most untrue is that autism goes hand in hand with mental retardation. Some autistics can be brilliant. Some can even be deadly.

Christian Wolff (Affleck) was born with a gift – a genius at problem solving. He’s a math whiz and able to ferret out patterns you and I could never see. He is also autistic, unable to interact well socially although he’d like to. He has rigid habits that govern his life; his breakfast is the same, every day, arranged on the plate in the very same way. He has his silverware in a drawer, arranged exactly the way he wants them – with no extraneous flatware to clog up his drawers. He likes things simple in his life.

Perhaps that’s because his job is so complex. You see, he’s an accountant and not just for anyone; he uncooks the books for some of the world’s most dangerous criminals, ranging from drug kingpins to assassins to terrorists to warlords. This has attracted the attention of the Treasury Department and it’s lead agent, Ray King (Simmons) who is getting ready to retire but who has been chasing the accountant for years. He wants to get him as a crowning achievement to his career so he enlists agent Marybeth Medina (Addai-Robinson) who is even more brilliant than he.

In the meantime, Wolff has been brought in by a biomedical robotics firm called Living Robotics to investigate some irregularities in their accounting, irregularities unearthed by a junior accountant – the chirpy Dana Cummings (Kendrick). CEO Lamar Black (Lithgow) wants these irregularities cleared up before he takes the company public. Wolff begins his investigation and turns up something – something that puts he and Dana in mortal danger, as a killer named Braxton (Bernthal) shows up to clean house at Living Robotics.

I like the concept here a lot; a high-functioning autistic action hero and Affleck is the perfect choice to play him. Affleck can play closed-off as well as anybody in the business and he shows that skill here. Christian is socially awkward and a little bit wary of social interactions. When Dana starts flirting with him, he’s attracted but he doesn’t know how to react. The scenes between the two are some of the best in the film. The other supporting roles are solid here as well, although Lithgow may have left a few too many tooth marks on the scenery for comfort.

One of the issues I have with the film is that I don’t think O’Connor and screenwriter Bill Dubuque were quite sure whether they wanted to make a thriller or an action film. Perhaps they wanted to make a hybrid of both but the pendulum kept swinging in one direction or the other and it ended up being unsatisfying in that regard. Worse yet, there are several plot twists, including one regarding the Braxton character which may as well have neon arrows pointing to them and blinking graphics screaming “HERE! PLOT TWIST! YOU’LL NEVER GET THIS ONE!!!!!” and of course anyone with a reasonable amount of experience at the movies should figure it out early on.

I like Affleck a lot as an actor; always have, even when his career was in a slump. Heck, I even liked him in Gigli which is saying something. He does elevate this somewhat, as does Kendrick and to a lesser extent, Addai-Robinson and Tambor (whose scenes are all too brief as Wolff’s mentor). It’s enough for me to give this flawed film a mild recommendation. It’s not a movie to write home about but neither is it one to troll Internet forums over. It’s a solidly made bit of entertaining fluff that will keep you occupied and be promptly forgotten. That may be enough in a lot of ways, especially in these stressful times, but it could have been a whole lot more.

REASONS TO GO: Affleck is terrific here and his chemistry with Kendrick is authentic.
REASONS TO STAY: Most of the plot twists are telegraphed and the movie falls apart towards the end.
FAMILY VALUES: There is plenty of violence as well as regular occurrences of profanity
TRIVIAL PURSUIT: While the film is set in Plainfield, Illinois (just outside of Chicago) it was shot in Atlanta where the production company got much better tax incentives than Illinois offered.
CRITICAL MASS: As of 11/12/16: Rotten Tomatoes: 51% positive reviews. Metacritic: 51/100.
COMPARISON SHOPPING: The Transporter
FINAL RATING: 6/10
NEXT: Keeping Up with the Joneses