Hollywood is as much a state of mind as it is a place on Earth. You can drive to it but you can never really achieve it; that is, unless you’re one of the lucky, magical few who make it in that town. And when you make it, so do those you brought up with you.

Vincent Chase (Grenier) is a movie star who is celebrating his divorce (or rather, his annulment) after nine days of wedded bliss on a yacht off of Ibiza. His boyhood chums – Eric (Connolly) who has been Vincent’s manager since his younger days; Johnny Drama (Dillon), his older brother whose stunning lack of success in becoming an actor is probably rooted in the fact that he can’t act for squat – and Turtle (Ferrara), Vinnie’s driver who just recently hit it big in a vodka line with Mark Cuban – are joining Vincent to drink away their sorrows, or whatever it is they’re drinking away.

Ari Gold (Piven), Vincent’s long time agent, has retired to Italy with his wife (Reeves) but at the behest of studio CEO John Ellis (Dale) has taken over the studio as production chief. His first order of business is to get Vincent locked into a new movie that looks like it could possibly become a smash hit – Hyde, a techno-retelling of the Robert Louis Stevenson classic .

When the movie runs into some financial issues and needs a few extra mill to finish up, Ari is forced to go to the money for the film – Texas rancher Larsen McCredle (Thornton) who sends his son Travis (Osment) to Hollywood to find out why more money is needed and whether or not the money already invested has been well-spent.

In the meantime, Vincent’s boys are having their own problems. Eric’s ex-wife Sloan (Chriqui) is about to have their baby and is willing to give their relationship another chance. However, perpetual nice-guy Eric has a relationship going with Dana (Zimmer) which might get in the way. Turtle is trying to get in good with MMA superstar Ronda Rousey (herself) who may nor may not be amenable to the idea, and Johnny Drama may have found the role that may finally turn his career around. The trouble is, it’s in his brother’s movie and Travis, the affable but dopey Texan, wants to cut him out of the film. And Vincent’s relationship with gorgeous starlet Emily Ratajkowski (herself) may complicate things more than either of them can imagine.

This takes place right after the HBO series ended its run four years ago after an impressive seven years on the cable network and is awash in celebrity cameos. So many that they are often of the blink and you missed them kind, like a venal encounter between Ari and Liam Neeson. Some of the cameos, like Rousey and Ratajkowski, are much more substantial and integral to the plot.

The good news is that if you didn’t watch the HBO series, you can still enjoy the movie – which is a fear I think may have kept some people away from theaters. Fans of the series will get a lot more of what they want; the teenage boy fantasy of endless parties, endless money and endless women, all of whom are SoCal gorgeous. Of course, there’s plenty of digs at the shallow Hollywood society, from the drug dealers to the studio heads to the creative sorts. Everyone has an angle, or so Entourage would have you believe, other than the innocents from Queens who stuck with their guy through hard times and are there with him to enjoy his success.

The humor here is crude and profane, and those offended by such things are going to have plenty of reasons to stay away. However, there are a lot of good reasons to go see this, in no small part thanks to Piven who made Gold an iconic character on HBO and shows that Ari, despite anger management courses and therapy, still rages with the best of them. Also of note is Osment, who after a successful child acting career has simply developed into a fine actor and shows some fine comic timing here; hopefully roles like this will help him garner more parts in a town which may have pigeonholed him into seeing dead people.

I don’t know that there was a demand to see Entourage again; while the creators were hoping that this would spawn a trilogy of big screen installments, the reality is that the show had something of a cult status at best and probably didn’t have enough of a core rabid fan audience to make those plans ill-advised. However, the movie that resulted was entertaining enough and even if you’re not counting cameos – which would be a fun drinking game when it makes it to home video – there’s plenty to make it worth your while.

REASONS TO GO: Ari Gold, man; Ari Gold. Osment shows some real comic chops.
REASONS TO STAY: Too many cameos spoil the broth. Maybe excessively crude.
FAMILY VALUES: A whole lot of profanity, nudity and sexual references, and a little bit of drug use.
TRIVIAL PURSUIT: The character Turtle is based on Mark Wahlberg’s real life assistant Donnie “Donkey” Carroll, who passed away at age 39 on December 18, 2005 from an asthma attack.
CRITICAL MASS: As of 6/22/15: Rotten Tomatoes: 39% positive reviews. Metacritic: 38/100.
COMPARISON SHOPPING: A Guide to Recognizing Your Saints
FINAL RATING: 6/10
NEXT: Spy 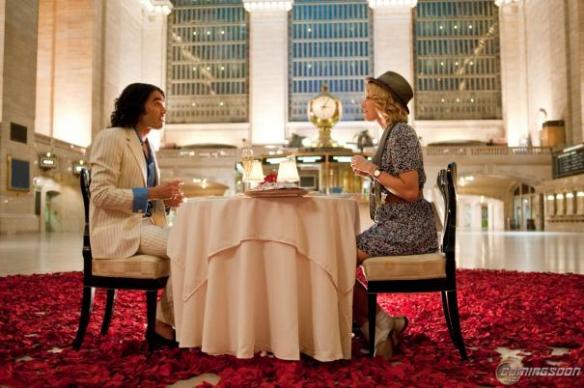 Russell Brand and Greta Gerwig try to out-cute one another.

The thing about remaking a movie which has become so beloved as 1981’s Arthur is that the new version is inevitably compared to the original and usually found wanting. The thing about films like Arthur (the original) is that they tend to be viewed through the dewy-eyed lenses of nostalgia and their flaws overlooked.

Of course, some movies are just flawed from the get-go. Arthur Bach (Brand) is the son of the CEO of Bach Worldwide, a major investment firm run by his mother Vivienne (James). Arthur is the sort of guy tailor-made for the tabloids, constantly getting involved in one scandal or another, usually having to do with women (he’s single) or alcohol (which he drinks a lot of). He is watched over by Hobson (Mirren), his childhood nanny who drily and somewhat acerbically sees to his needs and fruitlessly tries to protect him from himself.

But there’s one scandal too many and investors are beginning to lose confidence in Bach Worldwide. To stop the bleeding, Vivienne proposes to have Arthur marry Susan Johnson (Garner), her extremely competent right hand and the daughter of wealthy Burt (Nolte) the builder from Pittsburgh. She and Arthur had a previous relationship which ended badly.

Needless to say Arthur is reluctant to agree until Vivienne insists that if he refuses, he’ll be cut off from his inheritance of $950 million  (why couldn’t they just have made it an even billion?) so Arthur, not one to give up his toys easily agrees. Trust me, he’s got a lot of toys from a floating magnetic bed to the Batmobile. Yeah, that one.

So then he meets Naomi (Gerwig), a beautiful and spirited tour guide – well, a non-accredited one but she’s working on it. Arthur gets immediately taken with her and begins to woo her, despite her impending nuptials. He knows he has to go on with his wedding, not just for the money but because Burt the builder is going to use a power saw on him if he doesn’t. So Arthur is left with an age-old dilemma; marry for love, or marry for money.

The new version follows the old very closely, with some minor differences. Linda (the Liza Minnelli character from the original) and Naomi are very different, with Linda being a bit brassier and a bit shall we say less shameless while Naomi is a bit more quirky.

The movie rests on a several factors – the most crucial is the likability of Brand. He’s done this type of role before, the addled rock star Aldous Snow in Get Him to the Greek and Forgetting Sarah Marshall. Brand can be charming and is here for most of the show but to be honest, it’s hard to really be too sympathetic to a spoiled billionaire rich kid with mommy issues. In all truthfulness, Dudley Moore really made the part his and Brand doesn’t quite measure up.

Secondly, the relationship between Arthur and Hobson has to be strong, and it is. Sir John Gielgud won an Oscar for his portrayal of the stiff English butler who has an arch streak in him and a soft spot for his gentleman. Mirren is a distaff version of the part who is almost motherly towards her charge but with a Margaret Thatcher iron spine. She doesn’t get as many bon mots as Gielgud did (“I’ll alert the media” in response to Arthur’s announcement he’s taking a bath, a classic) and she doesn’t have the same chemistry with Brand that Moore and Gielgud had.

There is a good deal of crudeness here; the original was for its day somewhat crude in its depiction of drunkenness but this one exceeds the quotient that way and for no good reason. The overall environment for the movie – the middle of an economic downturn might not be a time where the general moviegoing public might be terribly sympathetic to the super-wealthy – might also have contributed to its lack of connection to the audience when it was released to theaters.

There is some charm and warmth here which does go a long way – Arthur isn’t a bad boy at heart, merely a spoiled one. Garner does some nice work as the cast iron bitch who wants to marry him for his name and no other reason, a role that strangely suits her, possibly because she also does the nice girlfriend so well.

As for snuggling up with your honey on the big romantic movie night, there are probably some better movies to put on the DVD/Blu-Ray/VCR if you’re of such a mind, but if you’re into extravagant romantic ideas, there are some here that might fire up your imagination.

WHY RENT THIS: The source material had a good heart which shows through here.

WHY RENT SOMETHING ELSE: Russell Brand is no Dudley Moore. Crude in places it shouldn’t be.

FAMILY VALUES:  There is quite a bit of alcohol use here (mostly by Arthur), some sexuality, a few naughty words (very few) and a couple of drug references.

TRIVIAL PURSUIT: In the movie Arthur’s father is 44 when he dies, the same age as the original movie’s director Steve Gordon was when he passed away.

NOTABLE DVD EXTRAS: There’s a gag reel and outtakes which give you a further appreciation for Brand’s skills as a comedian but nothing that really sheds any light on the making of the film.