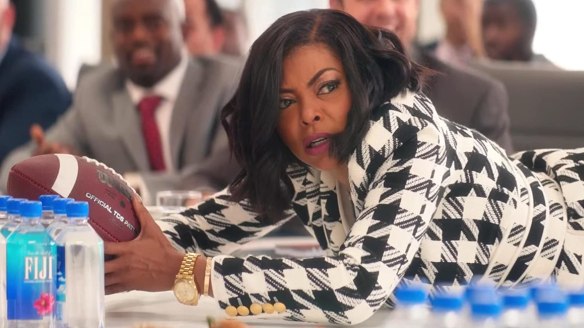 In 2000, Mel Gibson had a hit rom-com with What Women Want, in which a bathtub electrocution gave him the power to hear the thoughts of women (but not men). In this gender-reversal update (and I use the term loosely), Henson stars as Ali Davis, a brash and ambitious sports agent working basically at a white boy’s club where she hopes to become partner. When she’s passed over, she demands to know why since she has an impressive list of Olympic athletes with an impressive list of endorsements; her smarmy boss replies “You just don’t connect with men.”

Well, that problem is about to be solved by singer-songwriter Erykah Badu who plays Sister, a wacky psychic who is hired by a bachelorette party that Ali is attending. She supplies Ali with a drug-laced tea and then for good measure, Ali gets knocked upside the head by an oversized dildo. When she comes to, voila! She can hear the thoughts of men (but not women). She hopes to use her new superpower to her own advantage rather than trying to stop Thanos in his evil mission…err., wrong film. In any case, she discovers it isn’t so much what men are thinking that’s important (and non-spoiler alert – I think most women have a pretty good clue what men are generally thinking) but what is inside her own head that really matters.

The movie is full of rom-com clichés and never really excites any sort of glee from the audience. Henson is a talented actress who I’ve been a great fan of for more than a decade, and she does do her best here, but she has to contend with Badu’s shameless overacting (although to be fair Badu is pretty much the most consistently funny in the cast), a script that does her no favors and patter that rather than being snappy falls about as flat as a remake of a comedy about misogyny in the era of #MeToo. Timing matters.

REASONS TO SEE: Henson is a little bit over-the-top but still always watchable.
REASONS TO AVOID: Very cliché.
FAMILY VALUES: There is profanity and sexual content, along with some drug references.
TRIVIAL PURSUIT: This is the first R-rated film to be directed by Shankman.
BEYOND THE THEATERS: Amazon, AMC On Demand, AppleTV, Epix, Fandango Now, Google Play, Hulu, Microsoft, Redbox, Vudu, YouTube
CRITICAL MASS: As of 7/10/20: Rotten Tomatoes: 49% positive reviews: Metacritic: 42/100.
COMPARISON SHOPPING: What Women Want
FINAL RATING: 5/10
NEXT: Relic