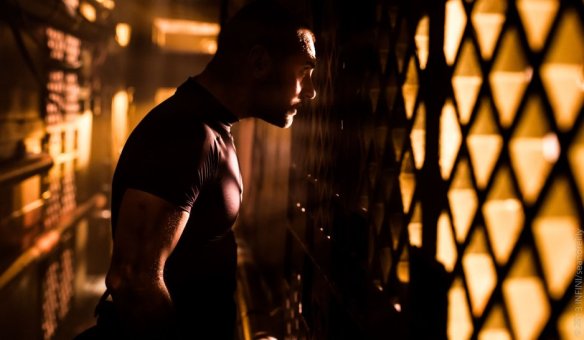 Not the peep show Daniel MacPherson was looking for.

By the turn of the 23rd century, Earth’s resources are pretty much gone. Unemployment is rampant and most of the jobs available are service jobs that pay very little. What does pay are the highly dangerous off-planet jobs. Fortunately, a technology has been developed called the Slipstream in which human beings are essentially digitized and sent instantaneously through space to locations all over the galaxy (the science here is a little bit wonky as even if the digital stream traveled at the speed of light, it would still take years and even centuries for the data to arrive). Unfortunately, the fatality rate by using this method of travel is high as the data stream can easily be corrupted.

Whit Carmichael (MacPherson) wants very much to support his wife Lisa (Haubrich) and the child that she is pregnant with. His first day on the job though goes horribly wrong; an infected subject comes through the Slipstream in the West Coast Command Center. In order to escape, Whit is forced to go to Infini, the location of an abandoned mining company which remains the worst deep space disaster in history where over 1,600 miners died while mining a volatile substance.

An elite rescue team is sent to retrieve him (there’s another subplot here but it’s baffling and not really germane and doesn’t get explored much so I’ll abstain from describing it). What they find on Infini is terrible, much worse than they could have ever expected. It appears that the miners all went berserk and killed each other off, brutally and sadistically. Worse yet, there may be an alien presence involved.

This is Aussie director Abbess’ second feature film. He’s been on Hollywood’s radar for seven years and has been attached to some fairly high profile projects in one form or another, few of which actually came to pass (and none with Abbess on board). He proves adept at doing a lot with a little, creating an industrial-looking aesthetic that reminds strongly of the Nostromo from Alien – lots of ducts, pipes and vents. Like that ill-fated vessel, this future looks lived-in.

Although the plot sounds like a standard “bug hunt” sci-fi action feature, there is a little bit more thought put behind it, musing about the human survival instinct and what elements of human behavior would make an impression on alien beings. Whit Carmichael is also not the action hero you might expect; he chooses flight over fight and while discretion is generally the better part of valor, Whit spends a lot of this movie hiding from everyone else.

There is a flood of testosterone coloring this movie; most of the dialogue is shouted or yelled, and often it is some cast member yelling “WHITTTTT!!!!” into the empty hallways of the mining facility. This is a noisy, often abrasive film. Abbess also uses quick cuts to distraction; we are constantly jumping around in point of view. This is the kind of camera move that is best used sparingly and it gets mighty annoying after awhile.

More importantly, Abbess is all over the place with his story. Much of what happens early in the movie (which starts out as a flash forward and then without any sort of explanation the movie shifts to a flash back) is without explanation of any sort until later on in the film and quite frankly you’re often left scratching your head as a viewer and wondering what the heck is going on. You don’t always get answers on that score, either.

Despite all that, the movie has some strong points. It is a good-looking movie and well-lit; often movies of this sort go the underlit route in order to increase the suspense of things jumping out of shadows. Most of the time, we see whatever is attacking coming. That’s actually kind of refreshing.

So what we have here is a movie that has good intentions but not quite the execution. It starts out as thoughtful science fiction but eventually degenerates into horror action sci-fi that blends Aliens with The Thing – not too shabby to be compared to those movies I grant you, but it fails to live up to either of them…or its own promise.

REASONS TO GO: Thoughtful premise. Nice cinematography.
REASONS TO STAY: Often confusing and incomprehensible story. Way too much shouting and testosterone.
FAMILY VALUES: Extreme, bloody violence and plenty of rough language.
TRIVIAL PURSUIT: MacPherson is the host of Australia’s version of Dancing With the Stars.
CRITICAL MASS: As of 5/18/15: Rotten Tomatoes: 50% positive reviews. Metacritic: no score yet.
COMPARISON SHOPPING: Pandorum
FINAL RATING: 5/10
NEXT: Lambert and Stamp

By now, virtually any sci-fi movie junkie can tell you the plot of a typical Hollywood space opera without seeing it: A crew of a seen-better-days vessel goes to remote system, finds alien/bad person/person affected by alien object, and brings he/she/it aboard said vessel.

Crew gets offed one by one in gruesome fashion aboard suddenly claustrophobic ship. Brave captain/crewman/strong silent type battles alien/bad person/person affected by alien object and is defeated and assumed to be killed.

No matter what, big things go boom inevitably in Hollywood’s formula for sci-fi. Even in space where sound doesn’t actually travel.

Supernova follows this plan nearly to the letter, as a rescue vessel answers a distress beacon from a remote mining colony. En route to the colony, the captain meets a particularly gruesome end (this one is for Trek fans who yearn to see graphic transporter accidents) and the ship suffers some heavy damage. The rest of the crew meets the sole survivor (Facinelli) of the supposedly abandoned mine, who is the son of a man who was once romantically involved with the ship’s doctor (Bassett).

From the first moment we meet him, he acts suspiciously enough to make Mother Theresa paranoid. Shortly thereafter, all heck starts breaking loose, as delineated in the outline above.

While Supernova is certainly predictable, it does have its moments. There are some gen-u-wine whiz-bang special effects (for its day) and the cast is solid, particularly the nearly unrecognizable James Spader in the taciturn hero role. Robert Forster as the ship’s luckless commander and Lou Diamond Phillips as an amorous crewman also turn in solid performances in a picture that overall doesn’t deserve ’em.

Be warned – Supernova sat on a studio shelf for more than a year before seeing the light of day – never a good sign – and was quickly dumped onto the marketplace during a time of year when new releases are generally few and far between. There IS a reason for such shabby treatment, folks.

I can’t think of many reasons to go rent the movie (and, it appears, neither did the moviegoing public, which stayed away in droves) especially in a theater full of obnoxious, restless teens as Da Queen and I did (at least we got a couple of passes for our trouble). Ah, sweet memories.

Supernova IS a great looking movie, for the few of you who absolutely, positively must see it. Spader is reasonably interesting as an action hero, a radical change from the soft-spoken cerebral sort he usually plays. Still, these are mighty poor excuses to plunk down hard-earned cash on a movie that reminds me of seeing a paint-by-numbers done by a four-year-old hanging in the Louvre.

Obviously I can’t really recommend this other than to those who want to see every big budget sci-fi film ever made. It isn’t completely without redemption, but for the most part you can find a better movie to fill your time with without stretching too hard.

WHY RENT THIS: Some fairly decent special effects. Spader is serviceable as the action hero.

WHY RENT SOMETHING ELSE: Pedantic and predictable. Lapses in believability.

FAMILY MATTERS: The movie has it’s share of violence and action scenes as well as a little bit of sexiness and some nudity.

TRIVIAL PURSUITS: Was the first post-Alan Smithee film in Hollywood. For years whenever a director wished his name removed from the credits for whatever reason (normally because he didn’t want to be associated with the final product), the name “Alan Smithee” would be substituted. After the film Burn, Hollywood, Burn: An Alan Smithee Film was released, the name became too well-known and the Directors Guild of America substituted the name “Thomas Lee” for Alan Smithee. Although Walter Hill (himself a last-minute replacement for Geoffrey Wright who departed a few weeks before shooting over a script dispute) directed, the movie was credited to Thomas Lee upon release, the first film with the dubious distinction of doing so.