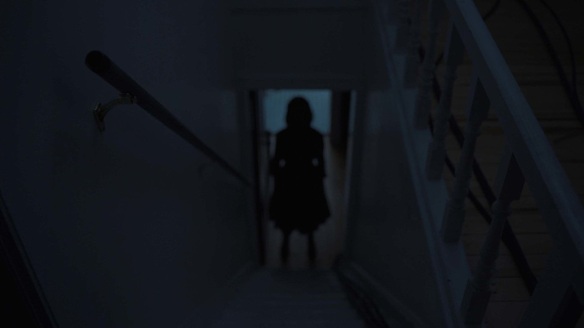 Something dark awaits at the bottom of the stairs.

The world is full of doors. Some are open, others are closed to us. Some of them should stay that way and others are downright dangerous to open even the tiniest of cracks.

Ethan (Mann) is a brilliant engineer/physicist who shares the dream of Nicola Tesla to make electricity wireless, available cheaply for anyone. He knows an invention like this could be his ticket to the good life; although he and his parents (Ralston, Hossack) are pretty well-off. Ethan’s studies make him essentially an empty chair in the house; his mom and dad (and brother Matt (White) and sister Becca (Moyer), a brooding teen and adorable moppet) wish he was home more often.

But Ethan is obsessed with his work and during a rare family gathering he cuts out early with his girlfriend Hannah (Peltz) to work on his creation in the deserted AI lab – except he’s not really supposed to be there. Things don’t go well at the lab – he doesn’t have enough power to make the device work – and ends up overloading the system and causing a campus-wide outage.

Things go from bad to worse when a call from home reveals that his parents have died in a car crash, leaving him to raise his two siblings alone. Three months later he has quit school and a promising future to work in a local electronics store. That doesn’t mean he’s given up on his project which he continues to work on in his spare time.

But his project has some unexpected side effects; it turns out that what he’s doing is amplifying the paranormal energy in the house, making it possible for the dead to communicate with the living and even materialize. The more power that Ethan draws with the help of a friendly neighbor (Kennedy) who works at the local power company (and whose wife recently committed suicide) the closer the spirits of his parents come to fully materializing. That would be good for Matt and Becca but extraordinarily bad as the range is beginning to widen and there are spirits who aren’t nearly as benevolent residing in the house.

There are some classic Spielberg-like qualities to the film; the close-knit suburban neighborhood, the family without parents, the bittersweet tone and the young genius. However, this isn’t yo Daddy’s Spielberg; this is something else. As with films like The Conjuring series, Although this doesn’t have the budget or the publicity push of those films, it actually does a pretty solid job of building up the tension slowly before going into overdrive at the end.

The juvenile leads have to carry the movie and they do a pretty good job overall. Poor Katie Moyer is given a pretty cliché sensitive little girl role who is the first to start sensing the return of her parents, who sleeps in her big brother’s room and is seemingly the most torn up over the loss of her parents. In fact, all of the young juveniles handle the difficult emotion of grief surprisingly well.

The special effects are pretty slim pickings but that’s okay; the filmmakers get a lot out of a little. There does appear to have been some post-production controversy; the director of photography pulled his name from the credits and the electropop duo Electric Youth withdrew their score after changes were made during Post and released the music on the soundtrack to a lost movie.

However to be honest I was surprised to find out about those issues well after I saw the movie. When I was watching it I didn’t get a sense that the movie was jumbled the way you normally do when producers or a distributor get involved in the creative process. The movie held its cohesion pretty well and the build up to an explosive climax was right on the money. I found it to be a truly effective horror film that while not quite as good as Hereditary was right up there in the same tax bracket.

REASONS TO GO: The suspense builds slowly but the ending is intense. Haunted house films are particularly well-done these days; this one is among the best. The scares are unrelenting. There is some good real-world content as well.
REASONS TO STAY: Becca is a little bit too cliché the sensitive little girl.
FAMILY VALUES: There is some profanity, a little bit of suggestive content, some terror and child peril and some disturbing horrific images.
TRIVIAL PURSUIT: The film was significantly altered during post-production; even the titled was changed from Breathing.
CRITICAL MASS: As of 7/30/18: Rotten Tomatoes: 62% positive reviews: Metacritic: 46/100.
COMPARISON SHOPPING: The Babadook
FINAL RATING: 9/10
NEXT: Larger Than Life: The Kevyn Aucoin Story