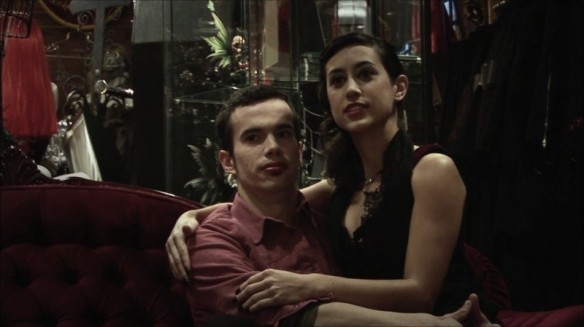 Don't you just hate getting lipstick smeared all over your face when you kiss? Wait a minute that's not lipstick...

If vampires are to survive in the world they must by necessity keep well-hidden. For one thing, people would panic if they knew there were superior predators living amongst us, indistinguishable from our neighbors. For another, the panic would lead to genocide as humans have a vast numerical superiority; no, vampires benefit from secrecy.

Which makes a documentary about their society all the more puzzling. After several aborted attempts (when camera crews got invited into vampire enclaves and ended up being the main course), a film crew finally got placed with a vampire family in Brussels.

Vampire families are a bit different than humans. For one thing, they can’t procreate sexually (although they have plenty of sex). Children are brought into a vampire family by turning young people into vampires. However, vampires don’t age once they are turned so turning children is frowned upon – instead it is usually teens and youngsters who are turned.

This particular family’s patriarch is Georges (Ferrante), an old school bloodsucker who is a bit spineless in a lot of ways. He adheres strictly to the code of conduct set for vampires going back centuries from the first vampires. His wife Bertha (Van Dooren) is a bit more bloodthirsty but she’s a bit of a hausfrau as well. She and Georges make a good match.

Their kids are a bit of a problem. Grace (Heuet) is tired of her immortality and wants to be a normal human, going so far as attempting to kill herself on a regular basis. Since vampires can’t be killed by ordinary beings, the attempts are pretty laughable but still she perseveres – you have to admire her tenacity. Samson (Lognay) is, like many men his age, the libido of a 16-year-old. Of course, he’s considerably older – he’s 55 but he looks like he’s in his mid-20s. That leads him to a transgression that threatens the family’s stability.

Of course, vampires don’t really exist but that doesn’t mean they don’t make for an entertaining mockumentary. Belgian cinema hasn’t exactly set the world on fire, but good films in a similar vein have come from that country before – see Man Bites Dog – and this one works very nicely. There is a very tongue-in-cheek sense of humor here that is occasionally unexpected, hitting you like a ton of bricks. For example, the vampires have human secretaries who take care of their daylight needs and occasionally serve as an alternate food source in case of an emergency – these are normally vampire fetishists who long to be immortal and hope to be rewarded eventually.

Their food supply are mostly immigrants and runaways – people who won’t be missed and who are kept in a pen out in the backyard. In all other respects however this is a normal suburban family with all the problems and issues that beset most modern families. Making that modern family vampiric adds an extra dimension and adds to the humor but it also allows the filmmakers to comment on those very issues without pointing the finger at society in general or suburbanites in particular.

I was rather surprised by this movie in that it I hadn’t heard virtually anything about it. So far as I know it got no US theatrical release and has mostly played the festival circuit in Europe. I caught it on the Sundance Channel here and so this might be rather hard to hunt down but it is definitely worth it, particularly those who love vampires and don’t mind poking gentle fun of themselves and vampires in general – and suburbanites. Definitely them.

WHY RENT THIS: Tongue-in-cheek funny. Nice idea and well-executed.

WHY RENT SOMETHING ELSE: Drags on a bit.

FAMILY VALUES: There are some bad words and some depictions of bloodletting and sexuality.