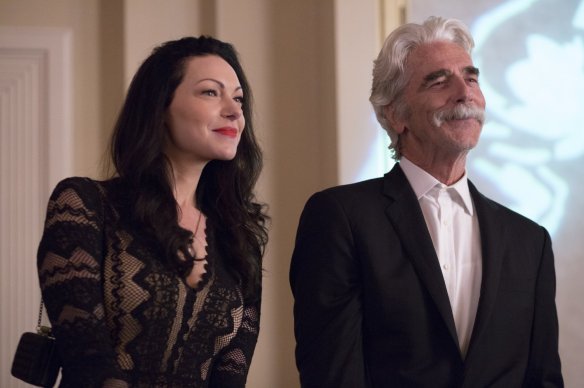 Laura Prepon and Sam Elliott are most definitely amused.

In many ways, we use the term “hero” a bit too loosely in our society. A hero can be a first responder rushing into a burning building to rescue those trapped inside, or it can be a dad willing to play catch with his son. It’s a matter of perspective. One person’s hero is another person’s non-entity.

Lee Hayden (Elliott) was once upon a time an actor of Westerns who was one of the best of his time. His film The Hero remains an iconic look at the Old West. However, he didn’t know that was to be his career highlight. Now in his 70s, the actor smokes pot, hangs out with a former co-star and child actor now turned pot dealer Jeremy (Offerman) who ends up introducing him to another client, stand-up comedian Charlotte Dylan (Prepon). Lee’s agent isn’t exactly what you’d call a go-getter; his career has been stalled for some time, having only a barbecue sauce radio commercial to fall back on and a Lifetime Achievement award for a small-time Western Film Appreciation Society. We all know Lifetime Achievement awards are code for “I didn’t know he was still alive.”

This is all taking place about the time that Lee learns he has stage four pancreatic cancer. Lee copes with the news by snapping at his friends and smoking all the pot he can get his hands on. A chance encounter with Charlotte at a taco truck leads to an endearingly awkward invitation to be his date at the award ceremony.

His acceptance speech in which he pays a somewhat heartfelt but molly-addled thanks to his fans goes viral and suddenly he has offers and opportunities that he hasn’t had in decades. His relationship with Charlotte though is going through some rocky patches, his daughter Lucy (Ritter) doesn’t want to see him and Lee is terrified at what his future holds. What truly makes a hero?

Let’s begin with the elephant in the room – Sam Elliott is an iconic actor with a voice that sounds as timeless as the Grand Canyon and a face twice as lined. This folks is arguably the best performance of his storied career. While I admit it’s a bit strange watching Elliott as a pot head, this is as nuanced and as versatile a performance as I can recall him giving. He has moments when he’s funny as hell (as when he tells an adoring fan who loves his moustache “It loves you too, honey” and gives her a sweet peck on the cheek) and others that are pure pathos. My favorite moment in the movie is when he tells his ex-wife (played by his actual real life wife Katherine Ross) that he has cancer. The scene is shot in long shot and we don’t hear what’s actually said. We just see the ex break down and Lee move to comfort her. It’s an amazing moment by two pros who I wouldn’t mind seeing much more of on the silver screen.

And now for the other elephant in the room (this room sure holds a lot of elephants); the cancer-centric plot. It’s not that we haven’t been through hordes of movies that are about aging parents with limited time left trying to reconcile with their angry children and yes, that’s exactly what’s going on here. However, it never feels maudlin under the sure direction of Brett Haley and Elliott and his fine supporting cast make sure that the characters always feel real; never do we feel like Hayden is almost superhuman in his stoic acceptance of his oncoming date with death. Hayden shows moments of terror and at last realizing he can’t do it on his own reaches out to those closest to him.

The movie was a big hit at Sundance and was selected as the opening night film at this year’s Florida Film Festival. That’s a high bar to live up to but The Hero easily reaches its lofty expectations and exceeds them. While some may think of the movie as being too sugary sweet on paper (and I admit it looks that way but only on paper) the reality is that the emotions felt genuine to me and Elliott’s performance transcends a lot of the fears I’d normally have with a movie like this. You may need a few tissues here and there but in reality this is the portrait of a truly heroic man, the kind of man who has become increasingly rare these days – a man’s man. With the scarcity of that particular species, it makes all sorts of sense to me that a woman Prepon’s age would fall for a man of Elliott’s. As hoary as the Hollywood May/December romance is, it works here. That’s a minor miracle in and of itself.

REASONS TO GO: Simply put, this may be the best performance of Elliott’s career. There are some real nice visuals. The film is an interesting take on the nature of heroism.
REASONS TO STAY: The plot is a little bit cliché.
FAMILY VALUES: There is more drug use than you’d expect as well as a fair amount of profanity, some sexuality and brief partial nudity.
TRIVIAL PURSUIT: Elliott and Ross are married in real life (they play exes here); this is the first cinematic appearance by Ross in ten years.
CRITICAL MASS: As of 6/30/17: Rotten Tomatoes: 76% positive reviews. Metacritic: 61/100.
COMPARISON SHOPPING: After Fall, Winter
FINAL RATING: 8/10
NEXT: The Gangster’s Daughter

I wouldn't be so calm with a monkey on my shoulder.

We all want to leave our mark upon the world, but for a lot of us, that boils down to one thing – impressing our parents. After all, if they can’t see us as successful, nobody else will.

Flint Lockwood (Hader) wants nothing more than to be an inventor. He has some innovative ideas, but quite frankly they don’t turn out quite the way he intended them to. The ratbirds he breeds escape into the wild, flocking around garbage cans and dumps. His remote control television develops a mind of its own and runs away. He creates a device that allows him to communicate with Steve (Harris), his monkey but Steve’s one word responses aren’t exactly what he had in mind and Steve is much more interested in ripping the moustache of his taciturn father (Caan).

His mother believes in him and encourages him, but after she passes away, he is left to be raised by his dad, a sardine fisherman who doesn’t really understand his son. The gulf between them is as wide as the Atlantic Ocean.

In fact, that’s essentially where they live, on an island well off the coast of America in the Atlantic. Swallow Falls is a company town and that company cans sardines. When the sardine market tanks, the town is left with a closed cannery, Baby Brent (Samberg) – the company mascot now grown to oversized adulthood and tons of unsold sardines which becomes the main food source for the islanders. Needless to say, they soon tire of sardines. Flint figures that he can change his status as town laughingstock by creating a device that will change water into food and sets out to build it in his backyard treehouse lab tower.

The town’s ambitious but corpulent mayor (Campbell) determines to reverse the town’s fortunes by creating Sardine Land, a destination theme park. However, Flint’s test of his rocket-powered food conversion device destroys the theme park, much to the disgust of Earl (Mr. T), the town’s lone police officer, but more importantly to the disappointment of his father. The device disappears into the stratosphere, leaving Flint once again to be the object of scorn.

Flint finds a kindred spirit in Sam Sparks (Faris), a wannabe weathercaster who thus far has been unable to rise above her intern status. Her first real assignment – covering the opening of Sardine Land – has turned into a debacle. The two are commiserating on the pier when a strange looking cloud approaches and starts to rain….cheeseburgers.

Yes, his device actually works and it creates a sensation. Thanks to Sam’s broadcast of the story, Swallow Falls becomes the center of the world’s attention. Flint goes from goat to hero in a single storm. He is able to program the menu from his lab and soon the requests come pouring in; jellybeans and ice cream for the kids, pizza and steak for the adults. Open-roofed restaurants become all the rage. The mayor happily gorges on the food that rains from the sky; there is such a surplus that a dam has to be built to hold the leftovers.

However, it turns out that there is a glitch in the software and the more that the device is asked to create, the more unstable it becomes. The food begins to get bigger and bigger until meatballs the size of Volkswagens begins to crash down from the clouds. Thanks to the incompetent mayor, the interface in Flint’s lab is destroyed. If the device isn’t shut down soon, the town will be wiped out and it is up to Flint to do it.

This is based on a children’s book popular 20 years ago, albeit very loosely. The original’s narrative was very barebones and the ink drawings not really in line with today’s animation style. The directors, who have a background in television with credits like “How I Met Your Mother” and “Clone High USA” on their resume, have crafted a movie that has received nothing but critical plaudits.

I have to admit I’m not as on board with the movie as other critics and even Da Queen are. I can admire the script which is cleverly written, full of the pop culture references that seem to be de rigueur for modern animated features, albeit in a much more subtle manner than most of them. There is a willful zaniness that owes a good deal to the Cartoon Network as much as anything else.

And maybe I’m a bit of a curmudgeon in that regard. I’m not a big fan of the Cartoon Network; I find most of the animation to be shoddy, the humor dumb and a little bit condescending to its audience. With few exceptions, most modern animated programs directed at kids seem to talk down to them.

That said, the casting is inspired. What could be more hip than having Bruce Campbell in your voice cast, and Mr. T as the acrobatic Earl is simply perfect. Everyone else does a solid job for the most part.

There are some good laughs and I suspect that most of you will probably like this a lot more than I did. I just couldn’t connect with it the way I have with things like Up, Kung Fu Panda, Wall-E and How to Train Your Dragon. That’s not a problem with the film; it’s a problem with me although I feel obliged to mention it, I can still recommend the movie to most audiences. I’m just not rating it higher because it’s the movie’s job to make that connection and it didn’t, and if it didn’t with me I’m sure that I’m not alone in that regard.

WHY RENT THIS: A well-written, clever script utilizes the pop culture references more subtly than, say, the Shrek series.

WHY RENT SOMETHING ELSE: Simplistic animation not up to the sophistication of Pixar’s best work.

FAMILY VALUES: No worries – this is suitable for all audiences.

TRIVIAL PURSUIT: Earl has the exact opposite hairstyle than his voice actor Mr. T – instead of a T-shaped Mohawk he has a T-shaped bald spot.

NOTABLE DVD EXTRAS: A music video by Miranda Cosgrove (with accompanying making-of featurettes) and a food fight game are built into the Special Edition DVD; the Blu-Ray also gives you an option to launch food at the screen while the movie is playing.