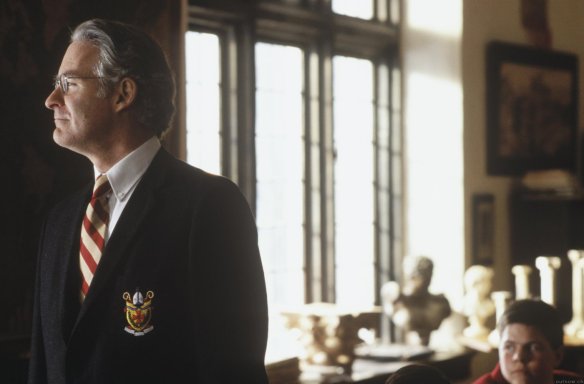 This teacher has eyes in the back of his head as his students have found out to their sorrow.

In the end, the measure of a person is in their actions, not just their ideals. It’s a fine thing to have lofty moral values, but another to live by them. The difference between doing what’s right and doing what’s right for yourself can be a very hard line indeed.

Professor William Hundert (Kline) lives a very ordered existence. As assistant headmaster and history teacher at the exclusive St. Benedict’s School for Boys, he is passionate not only about teaching Greek and Roman civilization, but also about making the right choices for the greater good, Hundert is beloved amongst his students and respected among his peers.

Into this existence comes Sedgewick Bell (Hirsch), the brash son of a powerful U.S. Senator (Yulin). Bell has little respect for anything or anyone, least of all himself. At first irritated by the constant challenges to his authority, Hundert grows to see the potential for excellence in Bell. Hundert attempts to inspire the young man, urging him to take part in a prestigious academic competition. It is here where his most cherished ideals are put to the test, both by the student and the teacher.

Based on the excellent novella ”The Palace Thief” by Ethan Canin, The Emperor’s Club is all the timelier for the recent spectacular examples of the lack of ethical behavior in business, government, Wall Street and academia which was sadly as true in 2002 as it is now. Kline’s performance as Hundert is memorable, although it borrows a bit from the Goodbye, Mr. Chips/Dead Poets Society line of teachers.

Hundert believes very deeply in his principles, but abandons them for what he thinks is the greater good of another person. However, when that greater good is betrayed, Hundert is challenged more than ever to keep his belief system intact. He does so in a marvelously human manner, one to which all of us can relate. Hundert is no saint, but he is a good man – better than most in fact – but fallible. That sets him apart from Mr. Chips and other such dedicated super-teachers who Hollywood has showing his or her students that the high road is the right road. Hundert makes a moral choice that turns out to be wrong but one with which most of us can identify with – it is made out of hope.

It should be noted that several young actors that are coming into their own in Hollywood appeared in this movie, not just including Hirsch but also recent Oscar nominee Eisenberg and Paul Dano, so good in Little Miss Sunshine. The extra added attraction of seeing them early in their careers is appealing to movie buffs such as myself.

I was blessed to have a father who also had a very highly developed moral sense. He used to tell me that the harder road was usually the right one. It has been a principal that has guided me through some sticky situations. In that sense, I can identify with Hundert because of my father’s example.

Everyone should be lucky enough to have examples such as these in our lives. Lacking them, one can use this movie as inspiration to take the moral high ground. If seeing a movie can cause us to look in the mirror, then watching that movie is a worthwhile endeavor and The Emperor’s Club is that, and more.

WHY RENT THIS: Fine performance by Kline and early performances by several Hollywood stars. Presents a great teacher as fallible and human. Unexpected twists for the classroom drama genre.

WHY RENT SOMETHING ELSE: A bit melodramatic in places. One wonders if Sedgewick Bell learned anything valuable in his time at St. Benedict’s and if not, why bother?

FAMILY VALUES: There is bit of sexuality in the content, but not enough to make the movie uncomfortable. There are also implications of teen smoking and drinking.

TRIVIAL PURSUITS: The movie was filmed at the Emma Willard School in Troy, New York where the prep school scenes for Scent of a Woman were also filmed. Kline stood in as an English instructor for several classes at the school to prepare for his role, for which he got rave reviews from his students.