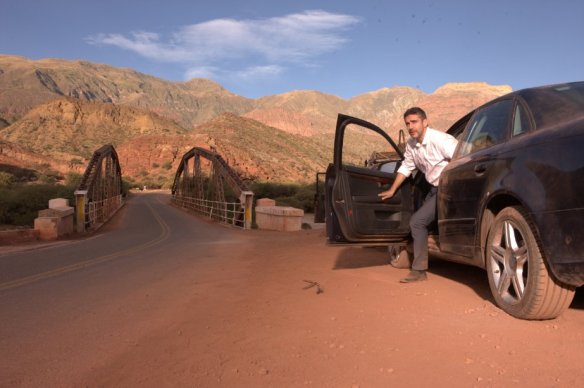 This guy could teach Mad Max a thing or two about vengeance.

Revenge, it is said, is a dish best served cold although it must also be said that in Latin American countries, there’s nothing cold about good ol’ hot-blooded Latin revenge. It is a cultural imperative, as a matter of fact.

This collection of vignettes each looks at vengeance from a different angle, all of them funny and some of them downright hilarious. Mostly set in Argentina’s capital of Buenos Aires (although at least one is set out in the hinterlands of Argentina), there is a delicious quality to all of them which goes against what we normally see in American movies in which we are taught that an eye for an eye tends to leave everybody blind.

Herein we see a variety of different scenarios, with the first one begins with a beautiful model sits down on a strangely uncrowded airplane and strikes up a conversation with a neighbor. Soon, all of those aboard the plane discover they have a connection and that they aren’t aboard the plane by happenstance.

From there on we go to a waitress, discovering that the corrupt politician who ruined her family has sat down in the deserted diner in which she works is egged on by her somewhat diabolical cook to take her justice, then to an incident of escalating road rage, followed by a demolition expert whose car gets towed, setting off a chain of events that grow more and more devastating. Then we see the results of a drunken hit and run by a spoiled scion of a wealthy man who, sickened by the corruption of those who want to cover up the deed, is torn between saving his son and not contributing to the corruption. Finally we end of with the ultimate Bridezilla who makes a devastating discovery on her wedding day.

Each of the vignettes is told with a sense of humor that has a distinct Latin feel; some of it is quite subtle while some of it is broad to the point of slapstick and there is even some grossness that would make Apatow shudder and exclaim “Now, that’s going too far” – as in the road rage vignette in which one of the combatants defecates on the auto of another. Many auto-worshiping American men would rather have their genitals cut off with a butter knife than have that happen to their own car.

I was fond of the opening vignette which may be disturbing to some because of recent events in France which have some similarities to what you see here. The second one set in the diner isn’t nearly as clever as the others and briefly made me wonder if the rest of the movie would be like the first scene or the second; it turned out to be the former which was quite the relief.

My favorite was that of the munitions expert who is caught up in a corrupt, greedy scam of a towing company and his quest for justice ends up costing him nearly everything. However, in this particular case, his redemption turns him into something of a folk hero as a little man takes on the big machine and wins out. I think we’ve all felt like that at one time or another.

There is definitely a class element here; the road rage incident, for example, involves an upper class man in an expensive sedan versus a working class man in a beat up truck, while the case of the hit and run drunk driving we see the police and lawyer conspire with the wealthy man to have a groundskeeper in the wealthy man’s employ take the fall for the action committed by the wealthy man’s no-account son, which seems to indicate that justice is never truly served when it can be bought by the rich.

If you can see elements of the great Spanish director Pedro Almodovar in the movie, you are to be congratulated for your insight. In fact, Almodovar served as a producer for the movie although he didn’t direct it. Certainly his influence as a filmmaker can be felt in every scene.

This truly isn’t for everybody, I will admit. Americans don’t always find the Latin sense of humor palatable, although I think that we have more in common with it than not. Still, I enjoyed this very much and laughed throughout. It can be absurd and sometimes gross and even occasionally thought-provoking but there is some real superior filmmaking here.

REASONS TO GO: Howling with laughter funny. No weak vignettes.
REASONS TO STAY: Some might find some of the scenes crass and the opening vignette has elements in common with a recent tragedy that might make it offensive to some.
FAMILY VALUES: All sorts of violence, a little bit of sexuality and plenty of foul language.
TRIVIAL PURSUIT: This is the seventh film from Argentina to make the final list of nominees for Best Foreign Language film and the third straight to star Ricardo Darin.
CRITICAL MASS: As of 4/2/15: Rotten Tomatoes: 95% positive reviews. Metacritic: 77/100.
COMPARISON SHOPPING: Tie Me Up! Tie Me Down!
FINAL RATING: 7.5/10
NEXT: It Follows