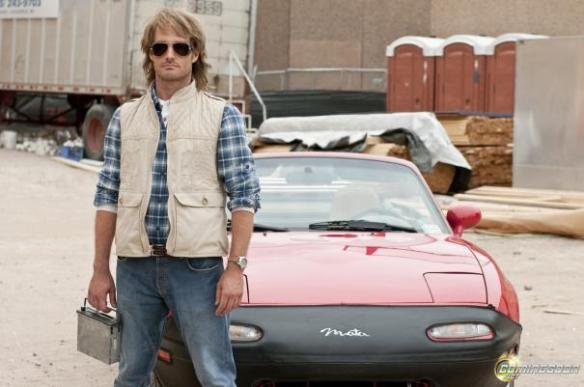 When the world needs saving, a hero must rise. Sometimes, when there are no heroes available, you must make do with what you’ve got.

MacGruber (Forte) is a former Navy SEAL, Army Ranger and all-around go-to guy when the world is threatened. However, after the murder of his fiancée by the notorious bad guy Dieter von Cunth (Kilmer), he has retreated to a monastery where he has resided the past fifteen years.

But von Cunth has reared his ugly head again and has captured a nuclear weapon which he is threatening to detonate in our nation’s capital. Only one man can stop him – and that’s MacGruber. Colonel Faith (Boothe) dispatches gung ho Lt. Dixon Piper (Phillippe) to fetch him and once MacGruber learns that von Cunth is involved, he’s all in.

MacGruber assembles a crack tam of operatives but accidentally gets them all killed, so he must settle for Piper and Vicky St. Elmo (Wiig), a former superspy who has turned lounge singer in hopes of forgetting her troubled past and the torch she holds for MacGruber, a torch still burning brightly.

However, as each attempt to foil the plot fails miserably, it’s beginning to look more and more like Washington is toast. MacGruber will have to find that inner hero – or else millions of lives may be snuffed out.

This started life as a series of five-minute SNL sketches that spoofed the old 1980s action series “MacGyver,” which was once a cultural touchstone with a hero that was able to extricate himself with odd household items. Kind of like the Science Guy meets a gun-phobic James Bond (MacGyver hated guns and never used ‘em) but in the last 20 years, the show has fallen out of favor. Younger viewers of SNL could be excused if they didn’t get the initial references.

Taccone, like Forte Wiig and Rudolph, also got his start on SNL doing short films (although not the MacGruber ones). There is a sense that the movie is padded; several jokes are repeated more than once, like a bit about a celery stalk in the buttocks (don’t ask). It wasn’t funny the first time and it wasn’t funny any of the following times either. Nobody ever said repetition was the soul of wit.

Forte is ok as MacGruber; the hair, flannel shirt and vest are pure 80s kitsch. It’s not the best role in the world to tackle – spoofs don’t really offer a whole lot of acting opportunities to be blunt. Still, Forte is likable enough even though MacGruber is an idiot; that’s kind of the down side of movies like this – being an idiot is sustainable only so long.

I am a big Powers Boothe fan and it was nice to see him in a role on the big screen once again, even in a movie like this. Ditto for Kilmer who was once one of the most promising leads in Hollywood but has made some poor role choices and has mostly been relegating to direct-to-home video schlock of late.

There are some action sequences straight out of the 80s action movie playbook, nothing to write home about but on the other hand nothing that makes you groan out loud either. You’re not going to be disappointed but you aren’t going to be doing much fist-pumping either.

There are those who love this kind of stuff and sure, there were enough jokes that worked that allowed me to write a review instead of writing it off. However there aren’t enough to give it much of a recommendation beyond to those who love raunchy spoofs – and this is plenty raunchy, believe you me.

So definitely an acquired taste – but not a taste I’ve acquired, so take my low rating with a grain of salt. Wiig would do so much better in this year’s Bridesmaids and Kilmer was better in movies like Real Genius.  Unfortunately, this isn’t as good as either of those movies no matter how you slice it. Even MacGyver couldn’t figure a way out of that one.

WHY RENT THIS: Forte captures the 80s action vibe nicely. Always good to see Boothe on the big screen.

WHY RENT SOMETHING ELSE: An SNL skit padded out to feature length. Just not funny enough to sustain a full length feature.

FAMILY VALUES: Some of the material is a bit crude, there’s some violence, a bit of nudity, some sexuality and a bit of foul language.

TRIVIAL PURSUIT: There are six active (at the time of filming) WWE wrestlers in the cast, the most ever in a single film.

NOTABLE DVD EXTRAS: There’s a gag reel and not much else.

BOX OFFICE PERFORMANCE: $9.3M on a $10M production budget; the movie was a flop.