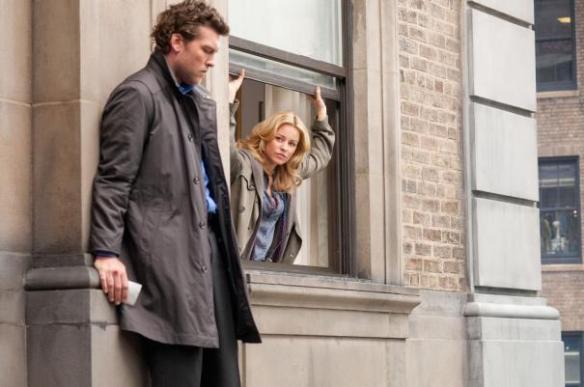 There are a lot of reasons why people climb out on the ledge of a tall building. It could be financial ruin, or a failed love affair. It could be a result of clinical depression, or drug use. Sometimes, the reasons aren’t all that obvious.

Nick Cassidy (Worthington) is standing out on the ledge of the Roosevelt Hotel in Manhattan. Traffic has been diverted and the cops are everywhere. A police negotiator named Jack Dougherty (Burns) is assigned the case but Nick wants a woman – Lydia Mercer (Banks) to be exact. She’s been under a cloud recently ever since she lost a jumper on the Brooklyn Bridge who happened to be a cop.

He’s not just any guy; he’s an ex-cop who escaped from prison only a week prior. He had been accused of stealing (and selling) a $40 million diamond belonging to David Englander (Harris), a cutthroat Wall Street sort who has all sorts of people on his payroll. Nick is being aided by his brother Joey (Bell) and Joey’s girlfriend Angie (Rodriguez) in proving that Nick is innocent and that David still has the diamond – by stealing it.

The plot is pretty simple and straightforward, and Leth tries to keep it that way. While there are several feints and twists as befits any heist movie (and the heist is a central part of the film) for the most part it doesn’t veer too much from the main concept and that’s a plus that many more veteran filmmakers sometimes miss.

Worthington has had great success in the fantasy and science fiction action realms, although he hasn’t quite achieved the stardom you’d expect with movies like Avatar and Clash of the Titans under his belt. He won’t move much farther in that direction with his performance here; he’s a bit wooden and the charisma he showed in those two movies isn’t as much in evidence although to be fair he spends most of the movie standing on a ledge talking to Elizabeth Banks. Nothing wrong with that mind you – just not a lot to work with there.

Rodriguez who plays the sassy girlfriend of his brother adds much needed sparkle, not only visually (she’s quite gorgeous) but also in providing an emotional boost. She provides comic relief but seems to be having the most fun of anyone here and she lights up the screen whenever she’s on it. She has stardom written all over her.

The problem here is that there are a lot of logical missteps. For example one of the stunts has someone leaping off of a 21-story-building and landing safely on one of those air-inflatable stunt mattresses which in real life would have a person-sized hole in it if someone were to do that. Also the brother is supposed to be working class but he has all these sophisticated devices to help him get into the vault. Doesn’t make sense.

Also the film misses out on capitalizing on its location. New York is one of the world’s most recognizable and photogenic cities but the movie could just as well be taking place in Pittsburgh or Toledo, anywhere where there’s a suitable high rise. You never get a sense that they’re in New York – and they freaking’ filmed there! That’s a big no-no in my book.

The movie isn’t all that bad but it isn’t particularly good either. You get a sense that you’ve seen it before and done better throughout. It makes for a decent enough diversion but if you’re going to spend your hard-earned dollars at the box office there are plenty of much better films in theaters right now than this, even at this time of the year.

REASONS TO GO: Solid jobs by most of the cast. Rodriguez is nice eye candy.

REASONS TO STAY: Premise is a bit “been there done that” and there are some logical holes that subvert the plot here and there. Misses on capturing the essence of New York.

FAMILY VALUES: There is a bit of violence and a few choice words.

HEIST LOVERS: The heist sequences are pretty well thought-out and while not super-original, were enjoyable to watch.