Students of history will remember the image of a jubilant British Prime Minister Neville Chamberlain waving a sheaf of papers in his hand upon his return from the Munich Conference with Adolph Hitler in 1938, exclaiming “I bring you peace in our time,” after getting the German Chancellor to agree not to invade the Sudetenland of Czechoslovakia by essentially handing over the territory to him. The policy of appeasement in order to provide “peace at any price” turned out to be tragically wrong, and Chamberlain was excoriated for it by contemporaries, but also by history.

This film, based on a historical novel by Robert Harris, tries to shed a different light on the outcome of the Conference. It opens with Oxford students George Legat (MacKay), Paul von Hartmann (Niewöhner) and Paul’s girlfriend Lenya (Fries) celebrating their graduation. Von Hartmann is particularly ecstatic, knowing he is going home to what he terms a “new Germany,” following the triumph of the Nazi party, taking a country bled dry by World War I and the onerous terms of surrender that was placed upon it. Six years later, Paul is a diplomat in Germany who’s attitude to the Nazi party has taken a serious about-face. Meanwhile, George is now married to Pamela (Findlay) and working as a private secretary to Prime Minister Chamberlain (Irons).

Chamberlain is frustrated at Hitler’s (Matthes) saber-rattling and refusal to negotiate. Europe stands on the precipice of another ruinous war, and nobody has forgotten how long it took to recover from the last one – and in fact, it could be argued that they were still recovering. So Chamberlain puts together a conference in Munich to try and hammer out an agreement that would prevent war. Legat, who speaks fluent German, is brought along to translate. MI-6 also sees an opportunity for Legat to perhaps ferret out some intelligence about Hitler’s plans.

Boy, does he. Paul’s current lover Helen (Hüller) has come into possession of a typed-out document that outlines Hitler’s plans to plunge Europe into a massive war, with Germany eating up territory, shipping undesirables East to labor camps, and resettling their land with good Aryan stock. Paul manages to get George’s attention and George arranges a hasty meeting with Chamberlain, but one of Hitler’s bodyguards (Diehl) who also happens to be an old friend of Paul’s, is keeping a watchful eye on him.

The movie tends to emphasize the espionage aspect of the younger, completely fictional characters, ignoring the opportunity to give us some insight into Chamberlain and the other historical characters in the movie, whose actions in Munich would have such enormous repercussions. To be honest, the espionage content is far less interesting.

Irons portrays Chamberlain as a man absolutely certain that he is right and working for the right end. In an odd aside, the movie seems to indicate that Chamberlain’s actions, far from merely giving Hitler the green light to do what he wished, actually gave the Allies needed time to prepare for the war, which is a bit of an odd way of looking at it.

We never really get a sense of the tension of living in a police state and while the cinematography is fairly nice (particularly in the opening sequence), the score is a bit bombastic and intrusive. Also, the opening and closing credits are done in kind of a weird Sixties Rankin-Bass kind of style which doesn’t suit the film at all.

The trouble with historical dramas is that we generally know how the movie is going to turn out. Nobody needed a spoiler alert to know that the Titanic was going to sink. That doesn’t mean that there isn’t something to see here, particularly on the occasions when the film looks more closely at Chamberlain and what drove him to the decisions he made. I wish they would have concentrated more on that and jettisoned the ill-advised and not-very-well-executed thriller material.

REASONS TO SEE: There are certainly some modern parallels to the return of authoritarianism.
REASONS TO AVOID: Focuses far too much on the espionage thriller aspect rather than on the historical drama, which is much more fascinating.
FAMILY VALUES: There is some profanity, brief violence, period smoking and adult themes.
TRIVIAL PURSUIT: Although the lead characters of von Hartmann and Legat are fictional, they are based on real people; the document that von Hartmann risked so much to smuggle to Chamberlain actually existed, although there is no evidence that Chamberlain ever actually saw it.
BEYOND THE THEATERS: Netflix
CRITICAL MASS: As of 2/8/22: Rotten Tomatoes: 86% positive reviews; Metacritic: 53/100.
COMPARISON SHOPPING: Valkyrie
FINAL RATING: 6/10
NEXT: American Gadfly 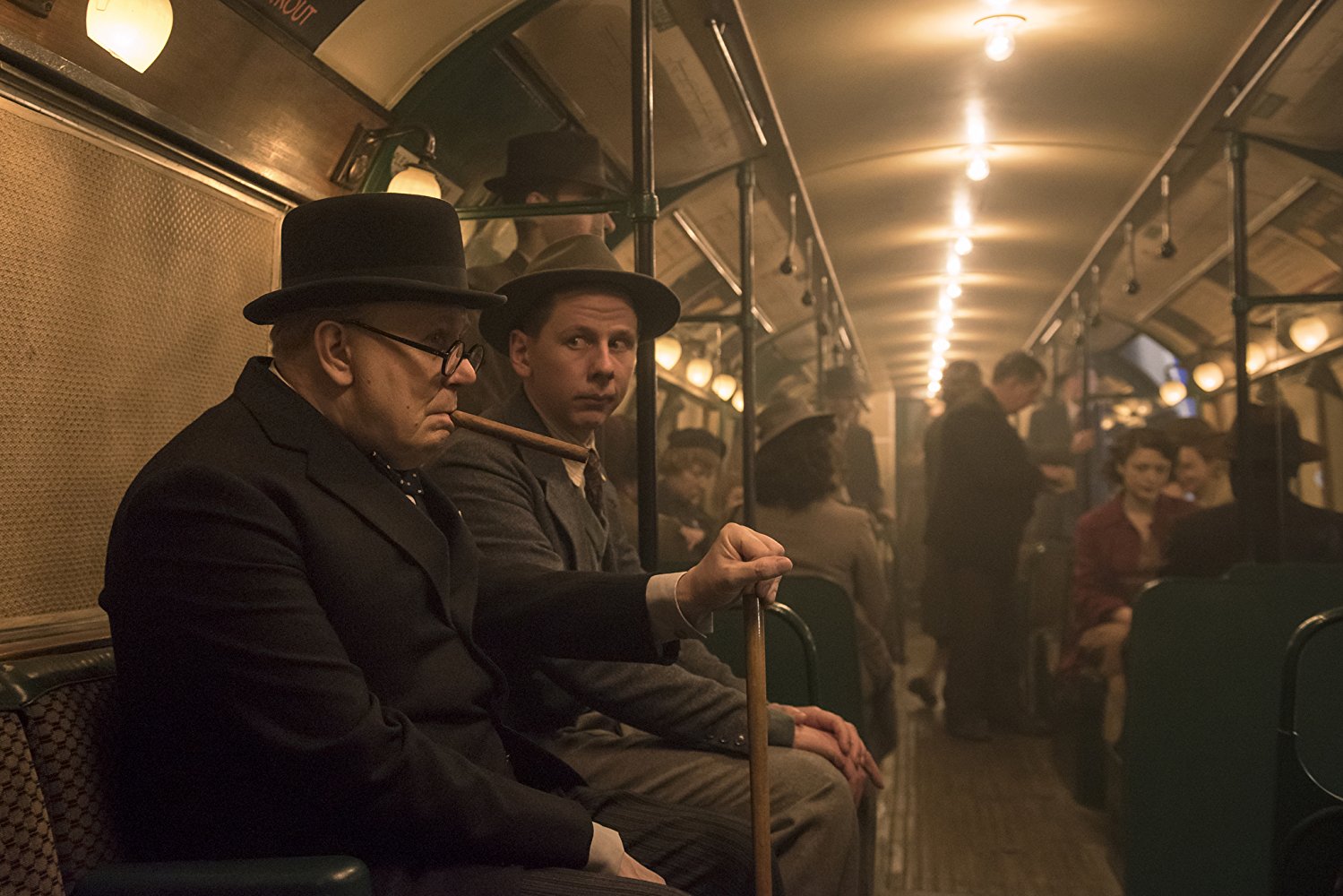 When you’re Winston Churchill, you can ride on the tube smoking your tube of tobacco.

Perhaps more than any figure of his time Winston Churchill remains in the eyes of Britain as an enduring hero, a steadfast bulldog who led England when she alone faced down the might of Hitler’s war machine in the year before the United States joined the fight.

In 1940, the war is going disastrously for Great Britain. Neville Chamberlain (Pickup), the Prime Minister who infamously declared “Peace in Our Time” after negotiations with Adolph Hitler essentially handed Poland to the Nazis, is about to be forced out of his position. Who will replace him? Lord Halifax (Dillane) suggests Winston Churchill (Oldman), a former First Lord of the Admiralty who’s Gallipoli Campaign during the First World War had been so mishandled that he left the position in disgrace.

However, he was politically astute and was one of the few candidates that the opposition would accept. Halifax suspected the notoriously blunt Churchill would fumble this position as well at which time Dillane and his faction that urged surrender to the Nazis could come in and negotiate a peace tht Britain could live with. As mind-blowing as that sounds, it actually happened.

Churchill has other ideas. Although aging and infirm as the result of lifelong smoking and drinking, he was still a firebrand who was one of the great orators of the 20th century although that was a part of his skill set that Chamberlain and Halifax didn’t reckon on. Churchill was prescient enough to realize that the Americans would eventually enter the war although that didn’t look likely at the time as conversations with President Roosevelt (Strathairn) brought Churchill to the brink of despair. With his army trapped at Dunkirk, his navy neutralized by the U-Boats of the Nazis and his RAF completely outclassed by the Luftwaffe, Churchill knew he was days away from having most of his fighting force annihilated, leaving the road open for Hitler to invade.

He was also sensible enough to know that there could be no negotiations for peace. “When will you learn,” he roars at Halifax and his allies, “That you can’t negotiate with a tiger when your head is in its mouth!” His relationship with King George VI (Mendelsohn), who detested him, was dysfunctional and only the steadfast support of his wife Clemmie (Thomas) – who also isn’t afraid to scold him from time to time – and his personal secretary Elizabeth Layton (James) was all he had to see him through. Nonetheless, his true strength came from someone unexpected – the British people themselves. This would lead to one of the defining moments in the War – and in British history as a whole.

This is very much Churchill’s story and as such it’s very much Oldman’s show and to his credit he responds with maybe the defining performance of an already lustrous career. He has been the odds on favorite to win the Best Actor Oscar since the first reviews came out in September following the movie’s debut at Toronto, and although there have been some great performances since the same sentiment prevails on the eve of the Oscar telecast this weekend. Whereas most of the previous performances of Churchill have either run perilously close to parody or focused on an aspect of the man, this is really the first onscreen performance that has captured Churchill as a complete, complex man. Blustery almost to the point of bullying (his first encounter with Layton reduces her to tears) but also possessed of an almost romantic soul, Oldman’s Churchill possesses an enormous ego but also a unique appreciation for the people of Britain that no other Prime Minister has possessed before or since. If anyone other than Oldman’s name is called on Sunday I should be very surprised.

Thomas does a game job being the yin to Churchill’s yang but she’s a lone tree against a hurricane. Nobody can stand against a performance like this and Thomas wisely doesn’t try. James also provides moments of genuine calm and compassion.

Maybe the most moving scene is one that didn’t actually happen in real life – Churchill taking a Tube from Downing Street to speak at Parliament rather than riding in his limousine. He takes the time to talk to the working people riding along with him and to his surprise they not only support him but urge him to fight for their survival, giving him all the motivation he needs. However, it should be said that while there’s no record of Churchill ever riding the subway, he was known to leave Downing Street to talk to the British people around London to find out what they were thinking and feeling. It is during this scene however that we realize that even though the movie is about Winston Churchill, it is also about the British people maybe even more so.

The movie is a bit long and takes a long time to get to the climactic speech that is the emotional payoff for the film but Oldman’s performance is just so engrossing that one doesn’t mind so much that we get to watch more of it. I will say that there are some CGI bombers and war scenes that aren’t very convincing; it might have been better to use newsreel footage rather than construct a nice but ineffective shot of a British soldier looking up to the sky through a hole in the roof of a house in Dunkirk and the camera rising to follow his gaze to Nazi bombers but because of the mediocre CGI the scene loses all of its power.

The movie is a strong one but one wonders how it would have been without Oldman in the cast; not quite so compelling I believe. Still, performances like this should be savored and encouraged. Oldman has given us a performance that comes in a very long while; you would be remiss if you are a film buff and miss this. Chances are you’ve already seen it but for those who haven’t, what on Earth are you waiting for?

REASONS TO GO: Oldman is the odds-on favorite to win the Oscar for Best Actor for good reason. This is a movie that makes as effective a use of pauses as any I’ve ever seen. The complex relationship between King and Prime Minister is highlighted.
REASONS TO STAY: The film is way too long. The CGI is poor and actually unnecessary.
FAMILY VALUES: Some of the thematic material is on the adult side.
TRIVIAL PURSUIT: John Hurt was originally cast to portray Neville Chamberlain but had become ill in the final stages of the cancer that claimed his life – which ironically Chamberlain was also stricken with during the period portrayed here. Hurt never made any readings or filmed any scenes but the movie is still dedicated to him.
BEYOND THE THEATER: Amazon, Fandango Now, Google Play, iTunes, Movies Anywhere, Vudu, YouTube
CRITICAL MASS: As of 2/28/18: Rotten Tomatoes: 86% positive reviews. Metacritic: 75/100.
COMPARISON SHOPPING: Churchill
FINAL RATING: 7.5/10
NEXT: Oh Lucy!