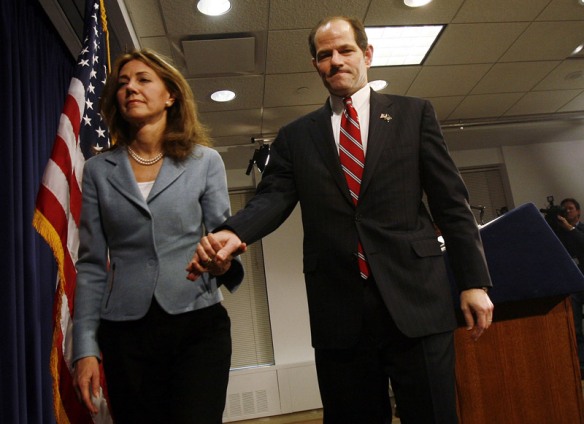 Some press conferences just don't go all that well.

Eliot Spitzer may wind up being a cautionary tale for 21st century politicians. He was once one of the most dynamic leaders in the country, the Sheriff of Wall Street, a man who took on crooked CEOs and won. He had gone from New York’s Attorney General to New York’s Governor and some said he might have a shot at being the first Jewish President after Obama’s presidency came to an end.

Then it all came crashing down. A juicy sex scandal – apparently the Governor had been seeing some very high-priced call girls. There were receipts, accusations and an incriminating document that listed Spitzer as “Client 9.” The interesting thing is that clients one through eight received little investigation and almost no attention. It was only Client 9 who had the microscope turned on him.

It must be remembered that Spitzer made a lot of powerful enemies, including AIG chairman Hank Greenberg who blamed Spitzer for his company’s collapse, New York State Representative Joe Bruno, Republican public relations specialist (and character assassin) Roger Stone and former NYSE director Ken Langone, to name a few. That his spectacular downfall followed his rise to power so precipitously makes one wonder if it was engineered. Certainly there are some compelling arguments in that direction, although Spitzer himself tends to downplay that aspect.

In fact, Spitzer’s interview is the highlight of the movie. He comes off as remarkably self-knowing, understanding that it was his own hubris that brought him down, his own mistaken idea that he was untouchable. He seems to be completely accountable for his actions, or at least projects that image. It’s easy to see how the charismatic Spitzer became so popular in the Empire State.

That doesn’t mean his opponents are any less compelling interviews, particularly Bruno (who is an old-school politician and quite entertaining in his own way) and Langone who’s like a pit bull and seems to have a special dislike for Spitzer.

Other reviewers have compared this to a Greek tragedy and indeed it is; it is the story of Icarus (as Spitzer himself remarks) who created wings made out of feathers and wax; when he flew too close to the sun, the wax melted, the feathers fell out and Icarus tumble screaming from the skies.

WHY RENT THIS: Spitzer is a fascinating character and the story is compelling. Very balanced in presenting differing viewpoints.

WHY RENT SOMETHING ELSE: An awful lot of talking head footage, little of which measures up to Spitzer’s own interview.

FAMILY VALUES: The film covers some fairly sexy stuff and there is some brief nudity. There’s also a fair amount of bad language.

TRIVIAL PURSUIT: Spitzer has since gone on to attempt a broadcasting career with CNN but both of his shows (“Parker Spitzer” and “In the Arena” were cancelled).

BOX OFFICE PERFORMANCE: $192,870 on an unreported production budget; it might have broken even but only just and it’s more likely it lost a bunch of money.