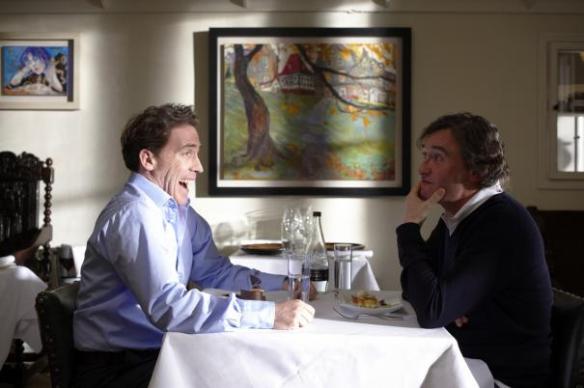 Road trips can be wonderful things. The people who go with us can start off as family or friends or even strangers but by the end of the trip, the shared experiences inevitably change the relationship. The more we get to know each other, the more our relationship changes.

Steve Coogan (Coogan), a well-known English comic actor accepts a gig writing an article for an English newspaper that will involve a tour of restaurants in the North of England. He does this to impress his American girlfriend Mischa (Stilley) who decides on the eve of the tour to spend some time apart from him and returns to America. Coogan doesn’t want to do this tour alone and after some finagling, manages to get Rob Brydon (Brydon), with whom he previously worked in the movie Tristram Shandy: A Cock and Bull Story.

Steve picks up Rob, a happy family man loathe to leave his wife and infant child, at his home and away they head to the North. There, in Yorkshire and Cumbria they’ll dine in Michelin-star rated restaurants, stay in 5-star hotels, banter at each other in the uncomfortable way of work colleagues thrust into a situation where they are together so much they are running out of things to say, and trade celebrity impressions at one another.

This originally began life as a six-hour miniseries on British television. It has been condensed down to a nearly two hour movie, edited for American sensibilities. Director Winterbottom is one of Britain’s most dependable directors, A Mighty Heart, Welcome to Sarajevo, Tristram Shandy and Code 46 among his filmography. Here, he doesn’t really have a lot to do – just point his camera at the two comedians (and occasionally at the lovely vistas of the English north and Lake district) and let them and the scenery do the rest. Sounds easy, but there are plenty of directors who have messed that simple formula up.

Coogan and Brydon have the easy familiarity of men who respect and like each other, and have worked well together in the past. Here the best moments are when they riff off of each other, trading impressions and needling each other about their British television personas. The farther we go into the picture, the more intimate the conversations get – not so much in a sexual sense but in a personal sense as they delve into each others fears, their lives and their hopes.

You have to keep in mind that this isn’t a documentary – these are men playing characters based on themselves, although how loosely is a matter for debate. Coogan, for example, is divorced and has a daughter – not a son, as depicted in the movie. The movie ends somewhat enigmatically but at least it doesn’t disappoint.

Along the way there are visits to Steve’s parents and some brilliant riffing in the car, including the two men singing Kate Bush’s “Wuthering Heights” near where the Bronte sisters wrote the book that inspired it. They are almost like a married couple, sniping at one another.

Maybe that’s why Rob gets a bit testy about Steve’s regular sexual encounters with women he meets along the way, from a Polish hotel clerk to a photographer he’d shagged before and hadn’t remembered doing it. In the meantime Rob has phone sex with his wife (or attempts to) but can’t resist breaking into impressions of Hugh Grant. In fact his constant willingness to break into different voices that grates on Steve’s nerves.

The humor is a bit on the dry side so for those who don’t appreciate the British sense of humor you might find this off-putting. For the rest of us, this is a six hour television show reduced to less than two so there is certainly a feeling that you are missing some connections here. Still in all, it looks like it would have been a fun trip to have been along for the ride on – and by that standard, you have to say this movie is a successful one.

REASONS TO GO: Tremendous chemistry between the two. Improvisational pieces are the best moments in the film.

REASONS TO STAY: Some of the references are too British at times. The humor can be a bit dry. The ending is a bit odd.

FAMILY VALUES: There’s some sexuality, some violence, a few disturbing images and some depictions of drug use.

TRIVIAL PURSUIT: There’s some swearing and a little bit of sexuality.

HOME OR THEATER: This character study can easily be studied in the comforts of your home.