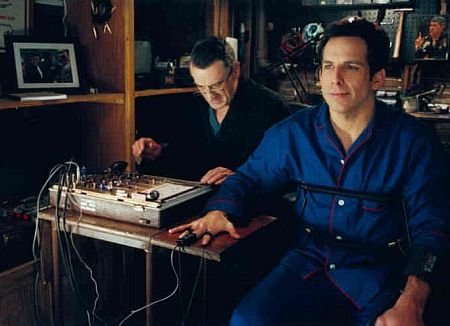 Robert De Niro wants to make sure Ben Stiller isn’t lying when he says that he’s his favorite dramatic actor.

It is true of all long-term intimate relationships that you are not only with your partner, are with your partner’s family as well (and they with yours). There is nothing more terrifying for a prospective groom than meeting the mom and dad for the first time with them eying you not as a boyfriend but as the husband for their daughter. Believe me, I know — I’ve been there.

Greg Focker (Stiller) is a male nurse facing this very prospect. He is head-over-heels in love with Pamela Byrnes (Polo) and is intent on marrying her, but wants to do it the right way. Before he asks her, he wants to ask her dad first. And for you guys thinking of asking daddy for her little girl’s hand, consider the nightmare it would be if daddy happened to be de Niro. As in Robert. Yup. Someone get the smelling salts please.

Focker does his best to make a good impression, but he is in a household made chaotic by the impending marriage of Pamela’s sister (deHuff), the presence of her medically-snobbish in-laws-to-be (George and Rebhorn) and Pamela’s somewhat put-upon mother (Danner). Things keep going wrong for poor Greg. And then they get worse. By the time things come to a head, your sides will be sore with laughter.

Stiller, on the strength of this film and There’s Something About Mary, has become one of Hollywood’s most bankable comedians. His likable boy-next-door style reminds me, oddly enough, of silent star Harold Lloyd, without the physicality. De Niro, who exhibited heretofore unknown comic talents in Analyze This, continues to lampoon his own image with hilarious results. Wilson, who has since made a career out of playing the laconic second banana shines here; he’s not so much a second banana as a comic foil here, the perfect ex who makes Greg look more and more like a schmuck with each incident.

My beef with the movie is that Greg, who is a plenty smart guy, turns into a raging idiot once the action begins. I can understand how the need to impress your prospective in-laws might lead you to doing some things you might not ordinarily, but Greg as a nurse didn’t strike me as particularly irresponsible – why would he be completely irresponsible in the in-law situation to the point of irrationality? That didn’t jive with me and was really the one part of the film I had trouble reconciling.

Even if you don’t like the Farrelly Brothers, whose style Meet the Parents most closely resembles, you’ll find yourself laughing out loud hysterically at some of the more inspired gags. There’s one bit involving a cat and an urn that literally turned the Da Queen and I purple from laughter. It’s very therapeutic (although those with parental remains in their home may cringe). There is definitely a more 90s comedic feel here but it never devolves into schtick which some comedies from the era did. While there is plenty of slapstick it didn’t strike me as particularly low-brow, sort of a happy medium more like.

Meet the Parents is vulgar in places (but not as much as, say, The Hangover) but it’s screwball at heart. It’s one of the funniest movies of its era, certainly far more successful in creating laughs than its two successors in the series. If life is stressing you out, an evening watching Meet the Parents could be just the tonic you need.

WHY RENT THIS: Stiller is at the top of his game. Really, really funny in places. One of the best comedies of its era.

WHY RENT SOMETHING ELSE: Stiller’s character acts unbelievably dumb in places.

FAMILY MATTERS: There is some sexuality, a bit of bad language and some drug references.

TRIVIAL PURSUITS: The name “Focker” was suggested by Jim Carrey who was at one time attatched to the property in the role Stiller eventually took. The MPAA wouldn’t allow the use of the name however until the filmmakers found at least one person with that surname, which they did.

NOTABLE HOME VIDEO FEATURES: All DVD editions include a Blooper reel. The DVD Bonus and Blu-Ray editions includes a scene of DeNiro singing “Love is in the Air,” a featurette on the training of the cat that played Mr. Jinx and a featurette on polygraph testing. The DVD Collectors edition includes none of those, but does have two interactive games.

BOX OFFICE PERFORMANCE: $330.4M on a $55M production budget; the movie was a big time blockbuster.

COMPARISON SHOPPING: There’s Something About Mary