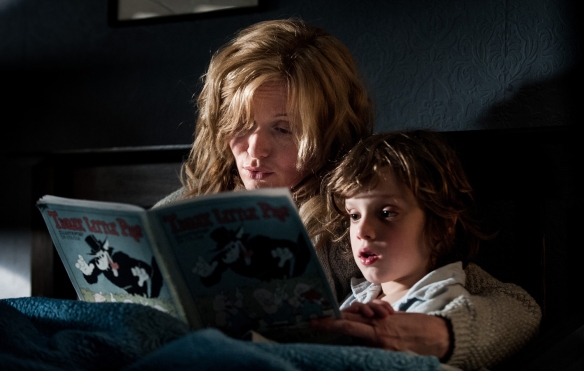 Not your average bedtime story.

I like Australians. They are such a genial people, laid-back and with a quick smile and a terrific sense of humor. I love hanging out with them. They drink like fish, love to eat and are the sort of friends that are loyal forever or until you piss ’em off, whichever comes first. Based on what great folks they are, I wouldn’t think of them as makers of great horror movies. Comedies, yes. But horror movies?

Yes. One of the most talked-about horror movies of the year comes from Down Under, and has quietly been sweeping through the Festival circuit bringing audience and critical raves. Now it’s out and about on limited release, not to mention on VOD.

Amelia (Davis) has that look. The kind where you know she’s hanging on by the skin of her teeth. Sure, she can be all smiles and helpful and generous at the nursing home where she works as a nurse (appropriately enough) but when you look closely at her, you can see that smile is frozen in place with duct tape and Elmer’s glue. The look in her eyes tells it all.

You see, Amelia’s life hasn’t turned out the way she planned. She was happily married, expecting their first child. In fact, she was on the way to the hospital to give birth but there was an accident – her husband died. Both she and the child lived. Now a rambunctious seven-year-old, Samuel (Wiseman) isn’t an easy child to raise by any standard. One moment affectionate and loving, the next screaming at the top of his lungs and being violent, Amelia’s sister Claire (McElhinney) no longer wants Samuel around especially after he pushed her out of a treehouse, breaking her nose. Of course, the other side of that is that the bitch told him that his dad wasn’t around because he didn’t want him. Ouch.

Samuel also sees monsters. Nasty, nightmare-inducing ones that terrorize him so much he sleeps in her bed nearly every night and wakes her up in the process. He builds home made weapons to smash the monsters, vowing to protect his mum and begging her to protect him. Just you and me against the world, kid.

She’s beginning to wonder if her kid needs therapy until a pop-up book shows up mysteriously. She didn’t buy it for him and he doesn’t remember where it came from but the book is vaguely menacing, outright creepy and informs them that you can’t get rid of the Babadook and that essentially it’s coming to kill them.

At first she thinks it’s just a prank, albeit one in poor taste but as unexplainable things begin to plague them, she begins to wonder if Samuel has been telling her the truth all this time. But is this monster truly real, or a figment of her imagination – a sign of her own madness? She has to figure it out fast because it’s already getting to be just shy of too late.

One of the things I adore about this movie is that they don’t make things clear-cut until near the end and even then there’s some ambiguity. Amelia literally unravels as we watch and pretty soon you wonder if there is really a monster or if the monster has been Amelia all along. There are signs pointing to the latter. She has problems connecting with her own son, blaming him for the death of her husband and she feels tremendous guilt because of it. She never once during the movie (although I think she might have at the very end) says “I love you” to her son. His issues are at least obvious and easy to read; hers less so but if you know where to look, she’s as deeply wounded as her son is.

Wiseman does a pretty credible job in a difficult role for any child actor. His outbursts seem genuine and when he shrieks at the top of his lungs, any parent with an ADHD kid will wince in sympathy. We’ve all been there when our child loses it, no? He has to play every gamut of the emotional range of kids and while at times he has that wooden quality that most child actors has, he acquits himself very well.

There are other decent performances in smaller roles, including veteran Aussie actor Henshall as a workplace romance for Amelia and West as Amelia’s next door neighbor who is, I think, her mother-in-law. At the very least she’s a concerned friend.

The Babadook itself, played by Tim Purcell, mostly sticks to the shadows and the audience rarely gets a good look at it. Its silhouette, seen on the movie’s poster, is menacing and chilling to say the least and this is one of the most well-realized movie monsters of the past decade.

This is the stuff of nightmares by cracky and while it doesn’t have the gore that some horror fans seem to require, it does have the right nightmarish atmosphere and the terror in the mundane that Tobe Hooper and Steven Spielberg used to such great effect in Poltergeist. While the low budget horror of The Babadook might not hold up to the big budget terrors in that film, it nonetheless holds its own and will be swimming around your brain months after you see it for the first time. This has all the earmarks of a cult classic and you’ll want to get in on the ground floor for it.

REASONS TO GO: Hits all the right notes. Fine performance from Davis. Keeps audience guessing. Some truly scary moments.
REASONS TO STAY: Watching a kid act out can be unpleasant. Dog lovers may want to skip this one.
FAMILY VALUES: Some foul language, plenty of scenes of terror and suspense, some violence and sexuality.
TRIVIAL PURSUIT: “Babadook” is an anagram of “A bad book.”
CRITICAL MASS: As of 12/19/14: Rotten Tomatoes: 98% positive reviews. Metacritic: 87/100.
COMPARISON SHOPPING: Red Riding Hood
FINAL RATING: 8.5/10
NEXT: The Graduate