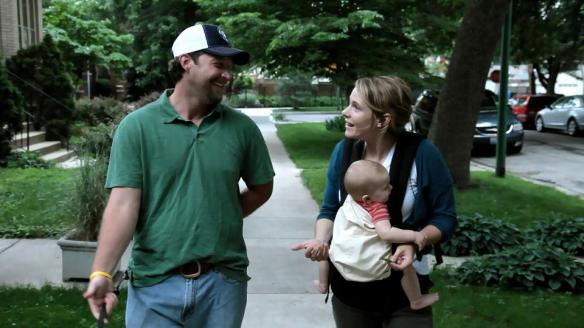 Having a baby can be fun!

Parenthood has become a very different proposition in 2013. The economic realities of having a baby in the 21st century are sobering for anyone, let alone a young family that isn’t pulling in big bucks.

Mary (Seimetz) is getting ready for her first day back at work for a charitable foundation benefitting Guatemalan children after having been out six months on maternity leave. Her husband Paul (Madden), an independent filmmaker who has had much more critical praise than financial success, is staying home watching baby Pearl (director Looby’s real-life daughter Tessa) while he writes his latest screenplay on a Mexican anti-drug crusader known as El Flaco. He figures he’ll do this while Pearl is taking her naps.

Unfortunately Pearl isn’t inclined to co-operate as baby’s are wont to do so Paul slowly begins to lose focus. She isn’t sleeping much at night either so Paul exiles himself to the couch to catch what rest he can. In the meantime, Mary is growing more and more frustrated with Paul’s inability to make money and her own exile at work. She wants very much to spend more time bonding with her baby – an imperative most moms can relate to I’m sure. Something’s got to give.

Looby is developing a reputation on the film festival circuit as a promising young storyteller and this is the kind of film that can enhance a reputation like that. This isn’t some Hollywood idealized look at how babies transform the life of a young couple – they do of course but not always in positive ways. Like anything else, parenting is an imperfect pursuit because people are imperfect. Those first couple of years of having a baby is exhausting; it’s a wonder any of us survive it. Exhausted people have a tendency to take out their frustrations in unhealthy ways.

Paul and Mary are basically good people who are in a situation where Mary is forced to be the provider, a situation not as unusual as it once was. The benefits she gets through her job are the only thing making it possible to have Pearl. The medical expenses of pregnancy, delivery and post-natal care alone are staggering without insurance. The toll taking care of a small creature who is completely dependent on you is significant as well; it wears one down.

This isn’t a depressing movie by any means – there’s a lot of love here. Looby based the film on his own experiences and in fact wrote and directed the movie while being a house husband, his wife working in much the same manner Mary does here (there’s an amusing scene where Mary finds a quiet store room to do her breast pumping and a co-worker walks in on her – one wonders how much biography is going on as opposed to fiction). I think he accurately captures the frustrations of new parents but also the rewards of newly parenting.

This isn’t going to rewrite the book on movies about new parents but by the same token it will leave you feeling fondly towards the characters and the situation. While new parents might well use it as a partial primer as to what to expect (and understand that every baby is different as is pointed out poignantly during a scene in which real life director Swanberg, playing himself, runs into Paul outside of a doctor’s office) this may well prove more useful as a movie about the changing roles of men and women in relationships. Either way, kudos to the filmmaker for keeping it real – something that is much harder to do than you might think.

REASONS TO STAY: Not necessarily inspirational nor instructional. Perhaps a bit too indie-centric.

FAMILY VALUES:  There’s a bit of language and some sexuality but not a lot.

TRIVIAL PURSUIT: The film’s assertion that Joe directed eight movies in the six months since his baby was born is a bit of a dig at the real Joe Swanberg’s prolific output of 14 movies before he turned 30.

CRITICAL MASS: There have been no reviews published for the film for either Rotten Tomatoes or Metacritic.

NEXT: Starbuck and more coverage of the 2013 Florida Film Festival!