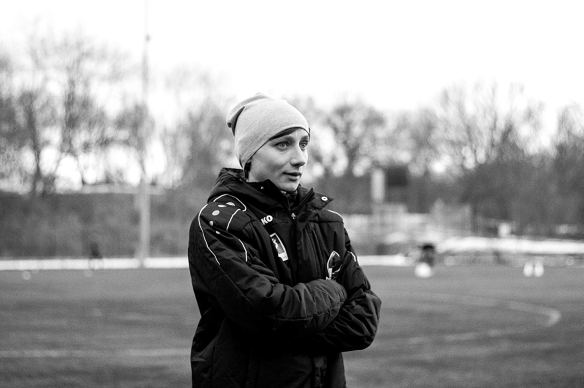 While we in the States tend to think of soccer (called by everybody else football) is a painfully slow and less athletic sport than the manly sport of American football, that’s just plain wrong, wrong, wrong. Football (the non-American kind) requires stamina, skill and intestinal fortitude to push beyond your limits when you are sure you couldn’t possibly run even one more step.

The ladies of the Olimpia Szczecin squad possess that kind of fortitude and much of it is largely due to their coach, Natalia Baginska. Her job is to motivate the women to push themselves higher and harder than they ever have. She is a stern taskmaster and keeps her charges busy as the club, sidelined for the off-season, prepares for the oncoming season with practices, scrimmages and practice games, called “friendlies” in the parlance.

Gaudėncio, a native of Portugal now based in Szczecin, has established a particular style for better or for worse, that is essentially cinema verité along the lines of an Errol Morris. He’s also fond of black and white, which worked nicely for the boxing documentary Down But Not Out but was a tactical error her; Soccer is a sport of color from the rich green of the pitch to the colors of the uniforms. It makes the film more drab than it has to be.

What really disappointed me about the movie though was once again he gives virtually no context about what we’re seeing. Why did he choose this team to follow? What happened with their season? He also doesn’t identify which player is which and we mostly see them in workouts without uniforms so we can’t even figure out the numbers. The games he does show often we get no sense of the flow of the game; there are some bits and pieces of the team on offense, other bits and pieces of the team on defense and occasionally celebrating a goal. We have no idea who they are playing.

We do get a sense that the players work hard and that the coach is a combination therapist and motivational speaker as well as a tactician although we get no particulars about the latter role. We do get plenty of scenes of various body parts on the players getting massaged which I suppose communicates the muscular aches and pains the ladies have to endure but it’s a point that seems to be getting made a bit too repetitively.

Of the three documentaries I’ve seen from Gaudėncio this is by far the one I’ve enjoyed the least. By halfway through the short documentary I was checking the time, praying for the film to end. By the time it did, I felt like I hadn’t gotten to know the coach all that well and the players even less. Not being all that well-schooled in the game of soccer, I can’t even tell you if the team improved over the course of the film.

However, the movie does have the advantage of being timely, released as the United States women’s team was capturing its most recent World Cup title so there might be some interest from that angle. I think it would be a good film for aspiring soccer players both male and female to see what is involved with becoming a top-level player. However cinema buffs may find the film to be a little too disjointed to be all that enjoyable.

REASONS TO SEE: Gives a sense of how hard these athletes work.
REASONS TO AVOID: Lacks any sort of context whatsoever.
FAMILY VALUES: There is some sports action.
TRIVIAL PURSUIT: Two of the partners in Green Box Europe are originally from Florida but now live in Poland.
BEYOND THE THEATERS: Amazon, iTunes, Vimeo
CRITICAL MASS: As of 7/27/19: Rotten Tomatoes: No score yet: Metacritic: No score yet.
COMPARISON SHOPPING: Down, But Not Out
FINAL RATING: 4/10
NEXT: Jurassic World: Fallen Kingdom