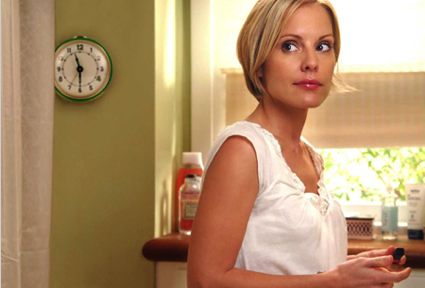 Finding love is a tricky thing, particularly true love. There are certainly no guarantees any relationship will work once entered into. What if you could find a way to find out without a shadow of a doubt the person you are MEANT to be with, guaranteed?

A new technological breakthrough has allowed a tech company to develop an implant that measures a certain hormone that….well it doesn’t really matter. What does matter is that this implant counts down to the day that you will meet the person you’re supposed to be with, your One and only. If that person also has a TiMER (which is what these implants are called) also, that is. If they don’t, your TiMER doesn’t display a time.

Oona (Caulfield) is an orthodontist who is, to say the least, a bit uptight. Her TiMER is blank and she’s almost psychotic about finding her One. Her mother (Williams) and father (Watson) had split up years before and her mother had remarried using the TiMER and is an absolute zealot regarding the device. Oona’s stepsister Steph (Borth) shares Oona’s birthday but is far more cynical about things. Her own TiMER reads that she is going to meet her One when she’s in her 40s and she’s filling her time until then with meaningless sexual encounters, an attitude she’s trying to convert Oona to.

In the meantime, Oona meets Mikey (Amedori), a bag boy at the grocery store. He is likable enough and the two of them hit it off but Mikey’s TiMER indicates that he will meet his One in about four months. Oh well.

As Oona becomes more and more drawn to Mikey, she begins to question her long-held belief that the device is truly the route to true love. Will she take a chance on the possibility, or wait for the sure thing that the TiMER provides?

The TiMER is a charming conceit and writer/director Schaeffer wisely keeps the tone sweet and light. Caulfield is an engaging enough actress (as those who remember her in her days as Anya on Buffy the Vampire Slayer will attest) and while her character is a bit too neurotic at times for my tastes, it’s still easy to get engaged.

Some of the performances, particularly in the smaller roles, are a bit flat, like the actors aren’t really invested in their roles. And the McGuffin of the TiMER itself seems a bit too far-fetched for me; I can see the appeal of a device like that but the human heart is so complex that it can’t be measured, quantified or digitized; therein lies the heart of the problem for this movie. If you can’t believe in the TiMER, it becomes hard to believe in the movie.

Still, there is enough charm and enough sweetness to make this movie heartwarming. I can recommend it for those who think romance can’t be predicted in any online test, no matter how thorough, because that seems to be the gist of the film. In that sense, I’m on board with the concept. Nonetheless, for those who are dissatisfied with the formulaic romantic comedies that seem to be the only sort of rom-com that Hollywood is capable of churning out these days, this will be a breath of fresh air for you.

A quick note: this film is part of the Tribeca Film Festival’s novel and innovative Tribeca Film Festival Home series, in which 12 of the movies screening during the festival are being made available on the On Demand video on demand series. Most of them are being released by the new distribution arm of the Festival, Tribeca Film and include some pretty seriously interesting films. We saw TiMER this way and it only cost us $5.99, although rates may vary depending on your cable/satellite service. In any case, it gives people who can’t make it to New York a chance to participate in the Festival. It’s a great idea and hopefully some of you will take advantage of it.

REASONS TO GO: A charming and sweet movie that gives some insight into the foibles of love and relationship-building.

REASONS TO STAY: A little bit implausible with its McGuffin and some of the supporting performances were a bit flat. A little neurotic goes a long way and there’s a lot more than a little here.

FAMILY VALUES: There is a whole lot of bad language and a couple of scenes of sexuality, some of it explicit.

HOME OR THEATER: A nice intimate romance perfectly suitable for a date night in front of the TV.