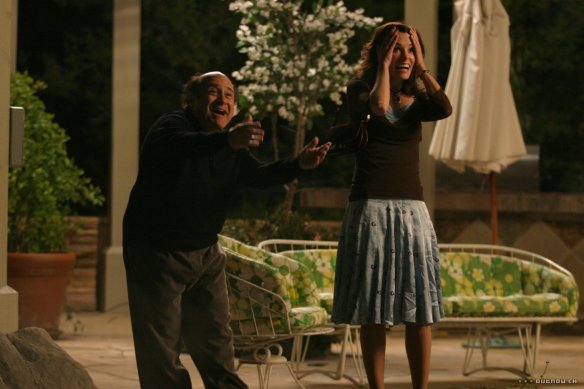 Danny deVito and Parker Posey have just found out they're supposed to make out in their next scene.

We have a thing about sex. It fascinates us, intrigues us, titillates us but ultimately makes us uncomfortable when we try to discuss it with one another. Even the thought of talking about our orgasms and our masturbatory habits can bring a blush to our faces that would put Rudolph the Red-Nosed Reindeer to shame.

Priscilla (Posey) is an uptight executive who has been married, comfortably by all accounts, to Jack (Rudd) for ten years. He’s a teacher in a local high school whereas Priscilla works as a shill trying to lure business ventures to relocate to Cleveland.

This has put a strain on the marriage and not to put too fine a point on it, on Jack’s feelings of masculinity. He’s literally tried everything to stimulate his wife and has essentially given up on trying. While the two are polite and civil to one another, there is a kind of awkwardness between them, like a couple of blind people trying to talk about the elephant in the room with no real context to work from.

That essentially marks the death knell of her marriage, driving Jack to an apartment (in the lovely Manly Arms, an apartment complex for single men – oh Cleveland I never knew you were so cosmopolitan!) and into the arms of a sexually aggressive student (Barton) which is illegal even in Ohio, but seems to make sense here; after all, if I was a teacher with a student that looked like Mischa Barton, I might consider throwing my moral compass overboard, at least for a while anyway.

Priscilla soon begins to feel lonelier than ever and finds she needs more than self-stimulation. She begins an unlikely friendship with Wayne the Pool Guy (deVito) who at first is only after putting a pool in her yard so that he can make an advertisement that he put a pool in every single home in the neighborhood, but eventually reveals a deeper side to him that you wouldn’t think was there…yes, I know a deep end for the pool guy, how droll.

This got widely panned by the critics when it was released in 2006 and I can see why that is; the humor is a bit forced and juvenile at times, but there is also Posey’s stellar work as Priscilla, playing off her reputation for playing ice queen-type characters and turning Priscilla into a sympathetic figure instead. Her relationship with Wayne the Pool Guy is one of the movie’s high points, even if on the surface the romantic relationship seems unlikely as all get-out.

The insights here into human sexuality mock its importance in relationships even as it does seem to infer that it is an important component indeed. It seems that Priscilla isn’t in a complete and healthy relationship until she begins to pleasure herself, which leads to actual sex, which she finds she likes even better – despite having had it 1,428 times previously without the desired results.

This isn’t going to change your life in any particular way, but it does make for a nice way to pass the time, even if some of the laughs are more like uncomfortable giggles. Although on the surface it seems to be an unsuccessful sex farce, I found it works better if you look at it more as a study on the place of the physical element in romantic relationships. American Pie this ain’t.

WHY RENT THIS: Some nice insight into human sexuality. The deVito-Posey romance is surprisingly believable and sweet.

WHY RENT SOMETHING ELSE: The humor is sometimes too quirky for its own good and occasionally the filmmakers try to force laughs that aren’t there.

FAMILY VALUES: There is a good deal of sexuality, a bit of drug use and a moderate amount of foul language. In other words, fine for most adults but a trifle much for immature teens.

TRIVIAL PURSUIT: The Cleveland setting is well-earned, as most of the filming took place there.

TOMORROW: Of Time and the City