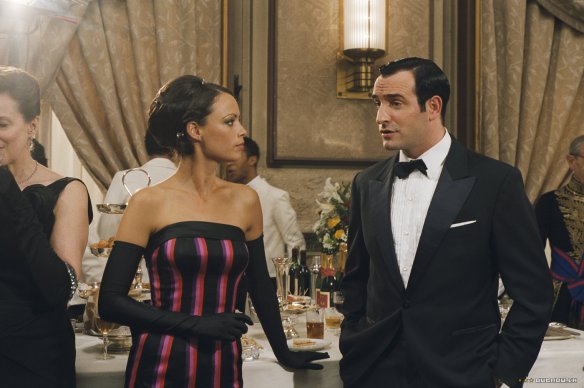 Jean Dujardin is stirred, not shaken.

You may wonder what spy novels looked like before Ian Fleming set pen to paper and came up with James Bond. If you have such thoughts, best check out the novel of agent OSS 117 by Jean Bruce; he wrote his first adventure featuring debonair spy Hubert Bonisseur de la Bath in 1949, predating Fleming’s “Casino Royale” by three years. Although I don’t know for certain if Fleming read the Bruce novels, certainly the similarities between 007 and 117 can’t be overlooked.

Cairo, 1955 – a crack agent of the OSS (the French version of MI-6 and the CIA) named Jack Jefferson (Lefebvre) has been murdered. The French government opts to send their best agent and Jefferson’s close friend Hubert Bonisseur de la Bath, a.k.a. agent 117, to “make the Middle East safe” and solve his friend’s murder.

He is given the cover of a chicken importer and Jack’s former secretary Larmina El Akmar Betouche (Bejo) to assist him, as he wades through American and Soviet spies, Nazi splinter cells, the supersexy Egyptian Princess Al Tarouk (Atika) and ghosts from his own past in order to get to the truth. In the meantime, he will demonstrate the French colonialist attitudes of the time, not to mention sexism on an epic scale. The joke is, of course, that those attitudes were standard at the time but looking back now, they are completely cringe-worthy.

Dujardin gets the look and mannerisms of Sean Connery-era Bond just right in this strange mixture of Clousseau, Bond and Austin Powers. Although the novels that Bruce wrote were straight-forward spy thrillers, this film is far from that ethos; instead, it makes merry fun of the genre, taking every cliché from the Bond series and throwing it back without mocking it so much. It is Hubert who is the most ridiculous, displaying an abysmal ignorance of local culture and customs but he is just so dang charming you don’t really resent him for it. One of the film’s funniest sequences is when a sleeping Hubert is awakened by a muezzin calling the faithful to prayer, he yells at him to “shut the **** up” and eventually climbs the minaret and pounds him into silence. It sounds horrible on paper and I’m sure many Muslims might take offense as written but it made me chuckle nonetheless.

The overall mood is enhanced by Hazanavicius’s use of period camera and optical techniques (such as rear projection during scenes in which the actors are in cars driving in the streets of Cairo, or the use of Technicolor that brings out the colors while giving the whole movie a kind of faded quality), as well as opening titles that recall the great Saul Bass.

Some of the jokes fell a little flat to me – that might have been a case of the humor losing something in the translation. Although the movie was only an hour and a half long, it felt like it had been stretched a bit. The movie’s climax also seemed a bit drawn out. However, if you like your spoofs over-the-top and Airplane-like, this might well be a hidden gem for you. Be aware this isn’t a Bond with all the gadgets and the Q Division; this is the Bond that was a suave, charming lady-killer one moment and a ruthless, rough killer the next. This is the Bond of From Russia with Love more than the Bond of Goldfinger. Well, technically, this isn’t Bond at all.

Yes, Bond and Hubert share the same pedigree in many ways but they are different animals. Hubert has a Gallic joie de vivre that no British actor could ever hope to duplicate. Part of me wonders how the movie would have fared if they had played it straight and cut out the outrageous aspects. Is the world ready for a truly international spy? We will have to wait for the answer.

WHY RENT THIS: Very reminiscent of the spy films of the 60s, with a Gallic twist. Some of the humor here is over the top and universal.

WHY RENT SOMETHING ELSE: Feels too much like something else at times. I wonder how much better it would have been as a film if it had been played straight.

FAMILY VALUES: There is some comic violence, a bit of sexuality, a few bad words and a whole lot of smoking.

TRIVIAL PURSUIT: The character of OSS 117 appeared in 265 novels and seven feature films in France between 1956 and 1970.

NOTABLE DVD EXTRAS: There’s a gag reel but everything else is pretty generic.