In an era when progressive politics have taken a beating and there seems little for liberals to feel good about, one thing that is a case close to the heart of every self-respecting leftie is LGBTQ rights. It wasn’t that long ago where staying in the closet meant survival; people who came out were hounded, their careers were ruined, they became pariahs and outcasts. Gay men and women weren’t allowed to be teachers; many of them weren’t allowed to attend church. They certainly weren’t allowed to marry people of the same sex.

Part of the issue was that homosexuality was classified as a mental illness. Gay men and lesbians were treated using psychotherapy and sometimes more barbaric methods, including shock treatment and aversion therapy. The monolithic American Psychiatric Association, comprised mainly of older white men – had decreed it so and in their official manual of mental illnesses. This label perpetuated discrimination against the LGBTQ community and early leaders such as Dr. Frank Kameny of the Mattachine Society and Barbara Gittings of the Daughters of Bilitis realized until this changed, they would never be able to achieve equality in this society. To make this change meant they had to change the minds of the APA and with doctors like Charles Socarides at the forefront, there didn’t appear to be much chance of that.

However, as those leaders looked into it, the case for the APA began to look extraordinarily thin without nearly any backing evidence. In the meantime, researchers were discovering evidence using approved scientific methodology that homosexuality was far from being a mental disease but a healthy expression of sexuality.

The fight wasn’t an easy one and those early pioneers were risking everything to be involved in the fight. It was a serious career risk to even be identified as an ally of homosexuals and people could end up without a career, or worse. But some people did step out of the shadows and into the light, and they did pay the consequences but for the most part, these people became heroes in the early gay liberation movement and helped pave the way for the kind of acceptance that the LGBTQ has gotten from mainstream America that was unthinkable even a decade ago. While there is still plenty of way to go, this documentary shows in a well-thought-out manner how that fight took shape, with plenty of archival footage, interviews both contemporary and recent with those that took part in changing the mind of the APA (which finally happened in 1973) and those descended from the principals who are no longer with us, like Barbara Gittings’ partner Kay Latusen, and Richard Socarides, the son of the psychiatrist most vehemently against declassifying homosexuality as a mental illness – and, ironically, gay himself.

The movie celebrates people of courage both gay and straight who are largely forgotten by the mainstream society, but nevertheless are as important to the LGBTQ equality movement as Dr. Martin Luther King and Rep. John Lewis were to the African-American civil rights movement. Given that the gains of the last ten years are threatened by a strengthening conservative and evangelical segment of our society, these people should be remembered in order to inspire others to step forward and take up their torch.

The film recently played Outfest, the most prestigious LGBTQ-centric film festival in the world. It is also scheduled for Outshine, the Miami LGBTQ film festival in the coming week. While the movie doesn’t have a distributor (yet), it will continue to play festivals and special screenings. Keep an eye out for it.

REASONS TO SEE: Told in a methodical and intelligent manner. Reminds us of some forgotten heroes. A timely reminder of how far the LGBTQ movement has come.
REASONS TO AVOID: Needed to clarify the direct line from declassifying as a mental illness to the right to marry triumph for those whose sense of history is not acute.
FAMILY VALUES: There is some profanity as well as some disturbing imagery of shock therapy.
TRIVIAL PURSUIT: The American Psychiatry Association first classified homosexual as a mental illness in 1952.
CRITICAL MASS: As of 8/31/20: Rotten Tomatoes: No score yet: Metacritic: No score yet
COMPARISON SHOPPING: For the Bible Tells Me So
FINAL RATING: 8/10
NEXT: Centigrade 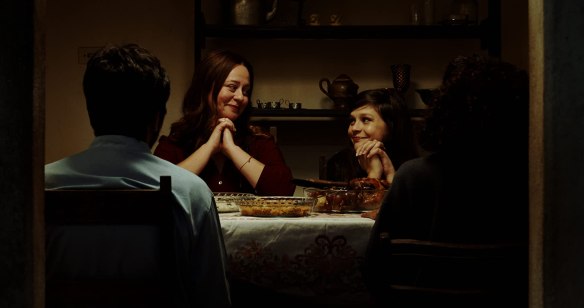 As humans, we like to put people in boxes. It makes it easier for us to figure out who they are, I suppose. The boxes can be narrow or broad – from a teenage girl to a gaming nerd to a math geek. Or maybe all of the above. People, though, seldom stay in the boxes we put them in.

Valentina (Woinbackk) is your average teen girl in Brazil. She likes music, argues with her mom, can be temperamental and has a healthy dose of drama in her DNA. She also happens to be transgender.

She and her mom (Stresser) have moved from Sao Paolo to a small country town to get a new, fresh start. Victimized by bullies at her own school, she is eager to enroll in school under her new identity. The problem is that the school won’t let her do that without the signature of both parents, including her father (Braga) who is no longer with her mom and who has had a hard time adjusting to the change that Valentina has undertaken.

At school, she is wary about telling anyone her secret, not wishing to be victimized again. She does start making friends but elects not to tell them that she wasn’t born a girl. However, complications begin to ensue when she is groped by a young man who works in the butcher shop who was, up to then, sweet on her. He in turn tells her bigoted brother who wants Valentina to be thrown out of school and is willing to go to extremes to see that it happens, including rallying the other parents in school to sign a petition. However, nothing is going to keep Valentina down – especially after her father turns up in her corner.

Woinbackk is a trans activist and popular YouTube personality in her native Brazil, and she has loads of screen presence; she has the ability to become a big star down the line with the right roles. One wonders how much of Valentina’s story is her story; I assume that she had her share of resistance to her decision to make the change. Woinbackk, if you get a chance to see her videos, has a forceful personality and it’s easy to see where Valentina got that aspect of her personality from.

In fact, one of the things I admire the most about the film is how Valentina is portrayed not as a transgender first and a girl second, but as a girl who just happens to be transgender. We get to meet the person, not a stereotype. Valentina could be any teen girl you meet in your own hometown – and there are probably several just like her that you don’t know about, who have elected as she did not to tell anyone for fear of persecution. One wonders why adults feel the need to terrorize a teenage girl, but that isn’t an unusual situation, in Brazil or the United States, sadly.

There are some elements of the movie that don’t work, unfortunately; at times the action becomes overly dramatic to the point where it feels more like a soap opera. The classroom confrontation at the end of the movie between Valentina and the bigot feels extremely contrived, and while it does hit the right feels, it never rings true.

That’s a shame because other than that this is a marvelous first feature for Pereira dos Santos, and an impressive acting debut for Woinbackk. A terrific character was created here, a true role model who isn’t perfect (Valentina can be a little hotheaded, and she has a tendency to not give her trust easily) but is still someone to admire. This is out on the festival circuit for now; hopefully one of the indie distributors that features LGBTQ films, or a cable/streaming service that serves that community will pick up this fine film.

REASONS TO SEE: Valentina is portrayed not so much as a trans girl, but as a girl who is transgender (a crucial difference).
REASONS TO AVOID: Has an occasional tendency to go the soap opera route.
FAMILY VALUES: There is profanity and some sexuality.
TRIVIAL PURSUIT: 82% of all Brazilian trans boys and girls drop out of school due mainly to bullying.
CRITICAL MASS: As of 8/25/20: Rotten Tomatoes: No score yet, Metacritic: No score yet
COMPARISON SHOPPING: A Fantastic Woman
FINAL RATING: 6.5/10
NEXT: 5 Years Apart