If you can’t see the forest for the VR, you’re missing out on life.

Hollywood has a habit of looking at the very old and the very young with nearly equal disdain; senior citizens are technology-averse, doddering and full of aphorisms that pass for wisdom in a world geared towards neat little soundbites; the very young are technology-obsessed, attached to their smartphones, tablets and gaming consoles like they have superglue on them. How do these disparate generations possibly communicate?

Marco (Vaccaro) is a soon-to-be 12-year-old boy whose mother (Ganias) is a nurse in Staten Island, and whose father (Cancelmi) is a videogame designer living on the West Coast. Yes, they’re divorced. Marco has been promised by his dad that if he gets to level 100 on his dad’s latest videogame, that he will fly Marco out to a prestigious videogame convention where Marco will be surrounded by the latest and the greatest – a 12-year-old gamer’s idea of heaven.

Throwing a monkey wrench into all this is Marco’s grandfather, Nonno (Patellis), an irascible old man mourning the loss of his wife and forced to live with his daughter and grandson in a house too small as it is. Nonno sees Marco as almost a shut-in with no friends, no exercise, and no life to speak of other than the fantasy life he leads online. Marco’s anxieties have translated into germ phobia and imagined food allergies which Mom tolerates, but doesn’t actively discourage. Marco regards his grandfather with all the warmth and acceptance that he would a case of chicken pox.

Wise old grandpa sees that an intervention must be made, and he confiscates all of Marco’s electronics with the promise that he can get them all back if he can put together a team of young boys to play bocce ball against his grandfather’s team – and Nonno happens to be a bocce ball champion. It’s a tall order, but if Marco wants to get to that convention, he’ll have to take the plunge.

Generation gap movies can be amusing – very often it’s hard to believe that differing generations are even the same species as ourselves – but they are, generally speaking, not terribly clever, particularly those meant for family viewing. For whatever reason, Hollywood has always felt that the way to find common ground between generations is to dumb things down as much as possible, and that is certainly somewhat true here. The screenplay is predictable, and while there are some moments that genuinely made me misty-eyed, it felt like there was a great deal of lost opportunity here.

We have a man in mourning for his wife of many years; we have a child so eager to impress his father who lives on the other side of the country that he’s willing to do almost anything, not realizing that his father shouldn’t be making spending time with him conditional on whether he plays the game he designed or not. That feels wrong from a parental point of view and in fact there are a lot of parental don’ts in the mix here. I can imagine that a lot of Italian-Americans might end up objecting to the portrayal of the grandfather as being a bit too stereotypical. The accent has all the flavor of Chef Boy-ar-dee.

Vaccaro is a pretty good young actor, but he plays the kind of kid (at least, in the first half of the film) that would make Mother Teresa reach for the leather belt. While he (and we) learn more about bocce than any of us probably ever wanted to know, Marco at least matures a little bit but for many, it will be too little, too late. Perhaps it’s because my son is a gamer that I have little patience for the whole “Gaming is everything” mentality that Marco has; it hits a bit too close to home, so take that aspect with a grain of salt. Still, early on in the movie I wanted nothing more than to put every electronic device I own into a landfill, and I’m quite sure that wasn’t the effect the filmmakers were going for.

As family entertainment goes, it does the job adequately, but only just. There are a ton of much better family films out there to be shared with multiple generations and as the holidays approach with the prospect of sharing close quarters with grandparents and grandkids, there is no doubt that you can do much better than this. 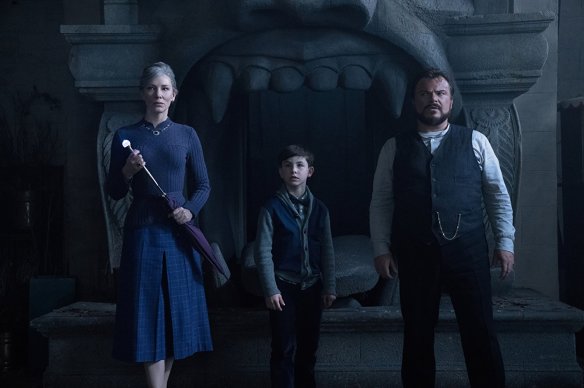 Welcome to the dark ages.

I don’t know why Hollywood has such a problem with adapting young adult fantasy franchises from their original book form. Other than the Harry Potter series, every attempt has led to movies that ranged from dreadful to dull and were more often than not, both. This first book in a series from author John Bellairs fares no differently.

Young Lewis (Vaccaro) has been orphaned. It’s 1955, so he has been sent to live with his eccentric Uncle Jonathan (Black) in Michigan. Jonathan lives in a mansion that you just know is haunted – all it lacks is hitchhiking ghosts – that is stocked with odd magical creatures, like a chair that is too eager to please and a garden topiary shaped like a griffin that – I kid you not – craps mulch.

Then again, Lewis is a bit of an oddball himself so he fits right in. Along with their prim and proper neighbor Florence (Blanchett) who carries on a platonic friendship with Jonathan, they are investigating the mystery of a ticking clock in the walls of the house that could well signal an apocalyptic cataclysm enacted by the fully evil previous owner (MacLachlan) who is definitely dead but certainly not gone. Jonathan is a warlock and Florence a witch but are they powerful enough to stop the evil machinations of a much more powerful magician?

Eli Roth, who helped popularize torture porn with films like Hostel back in the 90s, might at first seem like an odd choice for this kind of movie until you realize that before he started his run of blood-soaked horror features he was directing animated shorts for children, so he isn’t without understanding of the kid mentality. That’s why it’s sad that the film falls victim to the same trap most of the other failed young adult franchise adaptations fell into – talking down to their audience. Kids are definitely not dumber versions of adults; they’re just less experienced. Sure, you can make ‘em laugh with vomiting jack o’lanterns as Roth and screenwriter Eric Kripke (who helmed the superior Supernatural series on the CW) do but that is disrespecting your audience. If you wonder why the Potter series succeeded where so many others failed, look at the way they developed their characters and respected their story as well as their target audience. Studios don’t seem inclined to do that these days, I’m afraid.

Blanchett is a ray of sunshine as Florence and she gets many of the best moments in the film. Black does his best, but he’s a much more effective performer when there’s a bit of an edge to his game. Vaccaro is likely a nice kid, but he’s playing a boy who is supposed to be grieving and the scenes in which he’s called upon to cry for them are just appalling. I don’t blame him; I blame the casting director who put him in a terrible position.

The effects are passable and the movie is loaded – perhaps overloaded – with them. It lacks character development, substituting quirks for characters, and humor that will appeal to parents as well as kids. Toilet humor is the refuge of the faithless, and it is clear that the filmmakers had no faith that their audience could handle humor that’s above the level of a three-year-old.