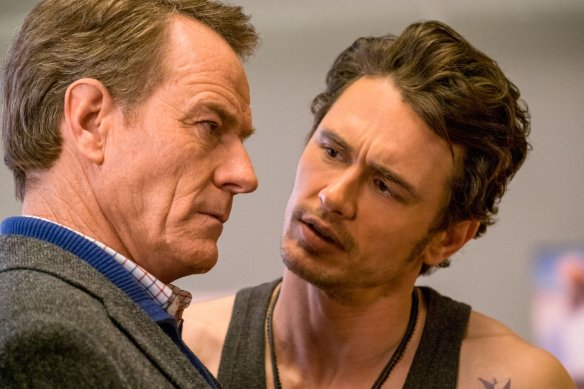 Talk about a generation gap…

The father-daughter relationship is a very special one. A man’s daughter is always his princess; the light of his heart, the twinkle in his eye, she inevitably has him twisted around her little finger. It goes without saying that no man will ever be good enough for Daddy’s Little Princess.

Ned Fleming (Cranston) is by all appearances a successful guy. He’s a pillar of his Michigan community and runs a paper company that has been one of the most successful in the Midwest for years; he has put his daughter Stephanie (Deutch) through college at Stanford where she is nearing graduation and his life is generally going just swell.

His bubble is on the verge of bursting though; his company is in serious financial trouble and there isn’t much of a future for it anyway – paper is going the way of horse and buggy given that most communication is electronic these days. His wife Barb (Mullally) and son Scottie (Gluck) are mainly unaware of this. However, the biggest blow is that Stephanie has a boyfriend that they don’t know about and what’s worse they’ve been together for more than a year. This disturbs Ned who had always assumed that his daughter told him everything. It seems she has a whole lot of secrets that he isn’t aware of. With the holidays coming, Stephanie invites her family to spend them in Northern California.

Said boyfriend is Laird Mayhew (Franco) and rather than being a doe-eyed college boy he turns out to be a 30-something tech magnate who earned his billions developing videogames. With a chest full of tattoos and absolutely no filter, he is a bit of a handful and a lot for the conservative Fleming family to take in. Most parents would be overjoyed that their daughter had caught the eye of a billionaire and seemed to be very much in love with him besides but not Ned. He’s suspicious of Laird and is positive that he’s up to something and Laird, to be honest, is a fairly manipulative guy. His high-tech Palo Alto mansion is full to the brim with all sorts of gadgets and toys, including a Japanese toilet/bidet combination that doesn’t quite work right (and hilarity ensues), a Siri-like house computer whose voice is that of Kaley Cuoco from Big Bang Theory and who tends to get cranky from time to time (more hilarity ensues) and a brand new bowling alley that Laird installed because he heard that Ned loves to bowl. Midwestern, right?

There is also a stuffed moose preserved in an aquarium full of it’s own urine which you just know is going to get all over someone sooner or later (not a spoiler: it does) and a valet named Gustav (Key) who is about every Eastern European goofball that populated sitcoms and movie comedies in the 80s and 90s and who, like Kato in the Pink Panther movies, attacks Laird with martial arts without warning (although to be fair the movie does name drop the series for additional laughs).

Laird means to marry Stephanie and wants Ned’s blessing, a blessing that isn’t forthcoming. It’s Christmas though and miracles can happen – although it might take several miracles to make this happy ending come true. Stephanie tries to make her father see that beneath the cursing (Laird drops F bombs constantly, a product of having no filter) and the sometimes bizarre behavior Laird is really a very nice guy, but that will be a tough sell to a father who already thinks that no guy is good enough for his princess.

In many ways this movie perfectly illustrates the disconnect between Hollywood and Mid-America which in turn spotlights why Donald Trump won the 2016 Presidential election. Ned and Barb as well as son Scotty are portrayed as extremely naive particularly about pop culture sexuality, not knowing what either motorboating or bukake mean – not that those are common terms but certainly the way that it is portrayed here is that they’re the only ones not in on the joke and quite frankly it’s a bit cruel. The West Coast hip tech types, standing in for the elite liberal crowd, are condescending and a little put off by the squares. It may interest the left to know that there is Internet in the Midwest and most of the people living there are a lot savvier than given credit for.

Cranston and Franco are no strangers to each other and it shows here. The chemistry between them is letter perfect and both exhibit a lot of give and take in terms of who gets the laughs and who is the straight man. Both perform beyond what you’d expect for what is essentially a holiday comedy which often tend to be just paychecks for big name actors. Cranston and Franco earn both of theirs.

But all the good intentions and strong performances can’t save a script that has little bite and feels more like a sitcom than a big screen comedy. There are some really funny moments (like when Laird brings in Gene Simmons and Paul Stanley from KISS for Ned and Barb who are avowed members of the KISS Army) and a few cringe-worthy moments (the aforementioned moose piss gag) but by and large there’s nothing truly offensive here. Neither is there anything truly noteworthy either.

REASONS TO GO: Cranston is on point as always and he has some terrific chemistry with Franco.
REASONS TO STAY: The plot is a little heavy-handed and riddled with clichés.
FAMILY VALUES: There is a fair amount of foul language and some sexual innuendo throughout.
TRIVIAL PURSUIT: The Ape Assassins game that made Laird Mayhew famous is available for download on the iTunes App Store.
CRITICAL MASS: As of 1/30/17: Rotten Tomatoes: 39% positive reviews. Metacritic: 39/100.
COMPARISON SHOPPING: Father of the Bride (1991)
FINAL RATING: 6/10
NEXT: 13th 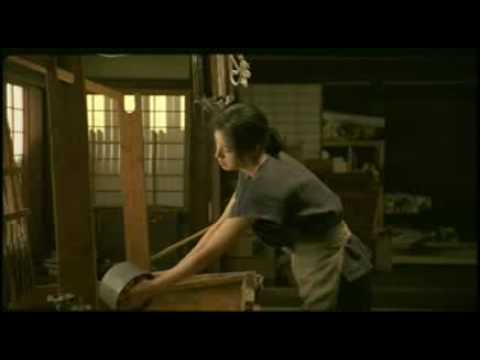 Japanese horror movies have grown in great leaps and bounds since the days of big lizards made of rubber suits. This new style of horror, nicknamed “J-Horror” by fans, relies on folk traditions, subtlety and atmosphere for horror. They also are known for delivering a knock-out punch in the sex and gore departments, something modern American horror movies have become awfully timid about in this day and age.

Akira, a young teacher (Watabe) assigned to a middle school in the town of Ikeno, runs out of gas on the way there. He is picked up by young Seiji Doi (Harada) and is brought to the idyllic little village of Omine. There he meets Miki (Amami), a 40-something spinster who is part of the Bonomiya family. She has a little workshop where she hand-makes specialized high grade paper for calligraphy for the Doi family paper company, run by the aging harridan Katsuko (Awaji).

Akira quickly develops feelings for Miki and as school starts, is able to walk back and forth between villages for romantic liasons with Miki. The romance is obviously agreeing with her, as she begins to look younger and happier even as her family is tormented by nightly bad dreams, even matriarch Tomie (Fujimura).

As the relationship between Miki and Akira begins to grow, she confesses to him a dark secret – when she was younger, she had a romantic fling with “the wrong man” who left her with child. She had the baby with the intention of giving it away, but it was stillborn. She has remained a spinster all that time, burdened with guilt and tending the newborn’s grave every day.

The Bonomiya clan is having problems. Patriarch Takanao (Yamaji) is something of a Luddite, forbidding television or radio in the home and yet, inexplicably, allows computers since he is developing an Internet business that eventually fails. Drowning in debt that is complicated by a gambling addiction, the brutish Takanao agrees to sell off Bonomiya land to a country club, a deal brokered by the Doi family, to retire his debts. This will also force Miki to move elsewhere, something she cannot bear since she loves the mountains so much.

The villagers tend to steer clear of the Bonomiyas and with good reason; as Tomie and Katsuko explain, the Bonomiya women are cursed with the Inugami, imp-like demons who reside in an urn who when loosed, bring the wrath of the dog gods on those who displease the Bonomiyas. A string of misfortune is blamed on the Inugami and the Bonomiyas and the villagers are growing restless and violent. Akira longs to take Miki away from all of this, especially since she doesn’t believe in the curse, but something ancient and sinister ties her with bonds harder than steel to the village.

The movie is brilliantly photographed, lush and beautiful. The village of Omine is an oasis of tranquility near a modern highway and railway line, depending on a river and ancient customs to make a slow-paced lifestyle for those who live there. Watching this, I could long for a village like Omine to decompress in.

There is little of overt gore and horror here, depending more on a sense of unease that something is not quite right. There is a great deal of sex in the movie and as is not unusual with Asian movies, subjects that are normally taboo for American filmmakers are breached almost casually. When the horrific climax begins, the movie changes from color to black and white, returning to color again when the events of the climax are concluded. The change is far more effective than showing blood and gore in living color.

The plot line is somewhat confusing, so you’ll need a lot of concentration to keep up with all the subtitles, and you’ll occasionally be lost in the beautiful cinematography of Junichi Fujisawa. There are no monsters here, except the ones we ourselves create, and no ghosts except the ones that were already there in the first place. Inugami is a marvelous find, a J-horror movie that received little acclaim (as far as I can tell) when it was released in 2001, but one worth seeking out and certainly well worth the effort..

WHY RENT THIS: Gorgeous cinematography and dependance on an uneasy feeling for horror before the real shocking acts begin in the final reel.

WHY RENT SOMETHING ELSE: The plot can be overly complicated for having to read subtitles throughout.

FAMILY PLANNING: There is a good deal of sexuality in the movie as well as a healthy amount of violence and gore in the final reel.

TRIVIAL PURSUITS: The inugami are actual figures in Japanese folklore; they have inspired a manga and anime of the same title that has nothing to do with this movie.