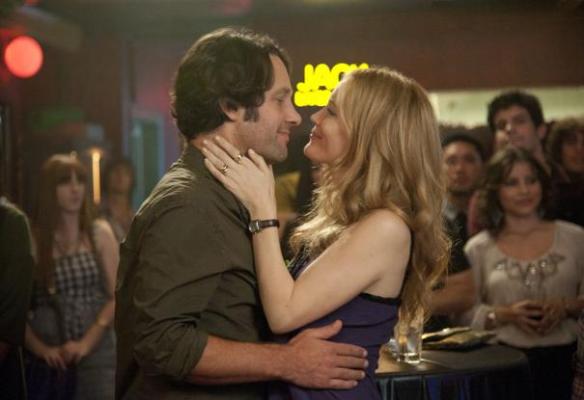 Love can make anything bearable.

As we get older our priorities change and in changing that aspect of our lives, we ourselves change. In a relationship, we’re constantly having to adjust not only to who we are but to who our partner is. Sometimes, those changes come at the expense of our relationships.

Pete (Rudd) owns a boutique record label that specializes in re-releases and new releases by bands from the 80s and so on. He is thrilled to have Graham Parker on his label, even though most of his friends and loved ones tell him that Parker isn’t going to sell any digital downloads. He is turning 40 although doesn’t look it. His record label is going down the toilet and he’s hinging his future on Parker; to fight the stress he retreats to the bathroom for hours on end and sneaks cupcakes that he swears he’s not eating. He also continues to lend money to his dad (Brooks) even though he can barely keep his own head above water.

His wife Debbie (Mann) is also turning 40 but she’s far less sanguine about it. She tells everyone she’s turning 38. Her trendy clothing store is being robbed blind by one of her employees; the mellow Jodi (Yi) swears it’s Desi (Fox) who drives an expensive car, wears expensive clothes and always seems to have a lot of money. Debbie fights stress by sneaking smokes when she thinks nobody is looking, even though her family thinks she’s quit. She’s completely estranged from her Dad (Lithgow) who ran out on the family when she was four, and the two of them are having trouble finding a way to bond.

Debbie and Pete snipe at each other and argue a lot which drives their kids – teenager Sadie (Maude Apatow) and her little sister Charlotte (Iris Apatow) nuts which they act out by constantly being at one another’s throats. This isn’t a happy family but it’s likely a family you’ve run into in your own neighborhood.

This is kind of a sequel to Knocked Up inasmuch as it concerns two characters who constituted the younger sister and her husband of the main female character. However don’t expect a similar tone as that movie because this is completely different. This isn’t as out-and-out funny as the previous film, for one thing. It’s listed as a comedy but there’s a whole lot of drama here with real world problems creeping into the marriage – financial stress, lack of communication, lack of desire, teenage hormones. Some viewers might find it hitting uncomfortably close to home.

Rudd and Mann come off as a real couple and while they clearly have some intimacy issues, they do have that easy familiarity when it comes to intimacy that couples that have been together awhile possess. It’s easy to picture them as a married couple, which is unsurprising as Mann is Apatow’s real life wife and Rudd has been a friend of his for a long time. The kids are also Mann’s children so her feelings for them (and theirs for her) don’t seem forced.

I was impressed by Mann’s performance particularly. There’s a moment when Debbie asks Pete if they’d have stayed together if she hadn’t have gotten pregnant (which is a bit of the flipside to Knocked Up) and when he hesitates, her look is absolutely priceless and heartbreaking. She does it all non-verbally and I was thinking in the audience “why oh why hasn’t this woman gotten better roles” because frankly she shows here that she can handle anything. I really hope she gets offered a few dramatic leads just so we can see what she’s really capable of. She, like Judy Greer, is much more than a second banana which is what both actresses seem to be cast as mostly.

I thought a few scenes ran a little too long and the pacing could have been a bit better. Universal is selling this as a comedy so I suspect it’s going to get some hating because people are walking into it expecting a laugh riot (and to be fair, with Judd Apatow’s name on it that’s not an unreasonable expectation) and will walk out disappointed. I’m sure that’s affected my rating of the film.

Being not what I expected isn’t a bad thing. There’s a lot to be said for throwing a change-up every once in a while. Young people might look at this and be turned off of marriage for good. All I can say about that is this: every relationship is a struggle and takes a good deal of work. Nothing is ever easy. But making a good woman happy is one of the noblest things a man can do, as is making a good man happy one of the best things a woman can do. In order to do it, there needs to be a lot of communication, a surfeit of honesty, a great deal of humbleness and a glaring lack of ego. These qualities are not always there in quantity and certainly not at every moment. We all go through rough times and they look a lot like this. Kudos to Apatow and his cast for attempting to capture that; it just may not necessarily be what you go to the movies to watch – it maybe what you go to the movies to get away from, and that needs to be a consideration before plunking down your cash at the box office.

REASONS TO GO: Great chemistry between Rudd and Mann. Some moments that are relatable and real.

REASONS TO STAY: Runs a little too long. Lacks the real laugh-out-loud funny jokes. Might be a little too “real” for some.

FAMILY VALUES:  There is quite a bit of sexual material, lots of bad language, a little bit of drug usage and some crude jokes.

TRIVIAL PURSUIT: While neither of the main characters from Knocked Up appear in the film a picture of Alison (Katherine Heigl) can be seen on the wall of the home and Pete mentions that he got the marijuana cookies from Ben (Seth Rogen).

GRAHAM PARKER AND THE RUMOUR LOVERS: In the film, Parker is signed to Pete’s label and performs a couple of songs live – one solo and one with the band. In real life Parker just released a new album which has been acclaimed as one of the best albums he’s ever done.

NEXT: Waiting For Forever