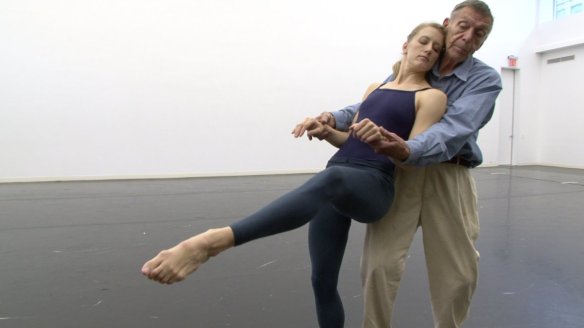 An expression of love.

Dance is the most physical of art forms. It is all about the human body but it is also about the human soul. The athletes who practice it must be physically fit, but also deeply in touch with their emotions. Those who choreograph these dances must have exceptional understanding of the human form, but also of human beings. The best choreographers are the best observers of our species.

Perhaps the most revered choreographer of modern dance is Paul Taylor, whose career spans six impressive decades. He danced for Martha Graham as a soloist and as a choreographer has such iconic works as Esplanade, Dust and Company B. He was, as Graham characterized him, “the naughty boy of dance” and has explored topics as diverse as incest, American imperialism, the afterlife, the effects of war and the natural world and mankind’s place in it.

He has always kept his creative process somewhat close to the vest, but granted documentarian Geis extraordinary access to his 133rd piece, one which would eventually be titled Thee Dubious Memories which has a bit of a Rashomon-like oeuvre as it explores the same events seen by three different sets of eyes. It takes us from the casting through the rehearsals and the film culminates with the performance of the piece.

Those who love dance will need to see this. Geis wisely lets her camera roll through the rehearsals and just captures Taylor at work with his dance company. The dancers themselves are a little bit star-struck and while most of their interviews are essentially excuses to heap praise and adoration on Taylor, some of the dancers – particularly Amy Young – reveal a good deal more about working for him and the demands involved. The filmmakers are clearly reverent about the man and while at times you get a sense that they are gushing a little bit, the respect is clear to see.

Taylor is extremely soft-spoken and to be honest at times almost lulled me to sleep. He is not particularly an exciting or vibrant interview although to be fair, he is a living legend in the dance community and doesn’t especially need to prove anything to anyone. For those who want to see a more exciting presentation of Taylor, they should look no further than the 1999 Oscar-nominated documentary Dancemaker.This is meant to be more about his creative process and at times, he seems to rely more on the dancers to spark some sort of inspiration in him than providing inspiration for his dancers to work with. The thing about a creative process however, is that it is of more interest to the creators than to those observing the creation. Caveat emptor.

The rehearsal sequences can be fascinating; you get the sense that Taylor notices everything and some of his notes to his cast show an amazing observational acuity. The dancing sequences both at the rehearsal and through the performance are absolutely magnificent; true devotees may miss the intimacy of a live performance but this remains a testament to Taylor’s genius and preserves one of his works for posterity, so that’s a very good thing. Those who don’t love dance may find this tedious.

At the end of the day, the only thing you really need to understand about dance is what you see onstage and how that makes you feel. Movies are very similar in that regard. What I saw was at times mesmerizing and at times, stupefying. I don’t know that I got a ton of insight into what makes Taylor tick, but I do know I got to learn a little more about dance and who can possibly say that’s a bad thing?

REASONS TO GO: Some wonderful dancing. Clearly reverent.
REASONS TO STAY: Offers little insight into the man. Little or no context. A little bit boring in places. More for people who love dance.
FAMILY VALUES: A little bit of mild profanity and some sensuality
TRIVIAL PURSUIT: Since this film was shot, Taylor has gone on to choreograph nine more works as of this writing.
CRITICAL MASS: As of 9/13/15: Rotten Tomatoes: No score yet. Metacritic: No score yet.
COMPARISON SHOPPING: :First Position
FINAL RATING: 4.5/10
NEXT: A Walk in the Woods