“Break out up the middle on three. Ready? Break!”

In a patriarchal society, women are often seen as little more than brood mares and chattel, auctioned off to the highest bidder and made as marriageable as possible in order to take them off the hands of their poor parents who must pay for their care and feeding, the sooner the better. While the world is evolving in general from such beliefs, in more rural areas of certain parts of the world, these attitudes persist.

Lale (Sensoy) is the youngest of five orphaned sisters living with their grandmother (Koldas) in a compound-like home in a small seaside town in Northern Turkey. Walking home from school, they encounter some boys who are friends (not boyfriends) by the beach and decide to go swimming, still in their school clothes. Their innocent childish games catch the attention of an elderly woman who reports their behavior as obscene and libidinous to their grandmother, who proceeds to initiate beatings for all five sisters.

Their brute of an Uncle Erol (Pekcan) proceeds to put the house on lockdown, turning a beautiful home into a virtual prison – a wife-making factory in fact in which the five sisters are removed from school, taught classes in sewing, tea-making and essentially home economics. Uncle Erol and grandmother move quickly to arrange marriages for the eldest, then the others in turn.

In the meantime the high-spirited girls have trouble adjusting to their newfound confinement, growing bold and concerned about the future they have in store that is being made for them without any input from the girls themselves. In heartbreaking fashion, they slowly break as their world shrinks to the confines of their barred and gated home and their purpose in life to please husbands they haven’t even met. Only Lale, the youngest and the most outspoken of the bunch, seems to have any spirit left.

This is an impressive film that was France’s official submission for the Foreign Language Film category, making the Oscar shortlist (as of this writing the Awards haven’t been presented yet) and being nominated for the same award in the Golden Globes as well. The nomination is well-deserved. Ergűven weaves a spell-binding tale that not only exposes the archaic attitudes towards women that exists in certain Muslim-dominated countries but also our own, lest we forget the attitudes of the Christian right having to do with abortion and female sexuality.

Ergűven cast the film wisely, particularly with Sensoy whose jaw-jutting petulance mark her Lale as an utter handful. She’s demanding and opinionated, something not tolerated well in traditional Muslim households when regarding women. In fact, that’s where the film title comes from; Lale is untamed and unbroken, although the same doesn’t remain true for all of her sisters as the marriage train comes to pluck them one-by-one, Ten Little Indians-fashion.

The five actresses with their long flowing brunette locks look like sisters and act like them too. Few films I’ve seen really capture the dynamic of sisters as well, from the bawdy teasing to the occasional rivalry and bitter fights. All five of the sisters are beautiful and not just physically; they have an inner beauty that radiates from them like an angelic glow.

Frequent Nick Cave collaborator Warren Ellis contributes the synth-heavy score, and it is very effective, never intruding on the viewer but always beautiful and haunting. Cinematographers David Chizallet and Ersin Gok take advantage of the bucolic Turkish village, making it seem almost idyllic until we see the ugliness beneath.

If I have one criticism of the movie, it’s that the editing is a bit choppy, going from scene to scene in abrupt cuts that wrench the viewer from one scene to the next. It makes the film a little bit like an old car with a bad engine and a flat tire, lurching from scene to scene. A little defter hand on the editing  bay might have made for a smoother viewing experience but at the same time, that does feel a little bit like the kind of vehicle you’d find in a town like this; well past its prime, beaten up but getting you where you need to go despite the problems.

I won’t say this is a beautiful movie, even though it looks beautiful; some of the scenes are very ugly indeed, with young girls being examined for their virginity, an indignity that American girls don’t have to tolerate. However, this is an incredibly moving and thought-provoking movie that will stay with you long after the movie is over. All five of the sisters – yes, albeit that not all of them are as well-drawn as Lale – are still with me even though I saw the movie days ago. And I’m not in a terrible hurry to ask them to leave, either.

REASONS TO GO: A look at a rarely-glimpsed culture. Forces you to examine attitudes towards women in general. Breaks your heart as the movie goes on.
REASONS TO STAY: The editing is a little choppy.
FAMILY VALUES: The themes are quite adult; there’s also some mild sexuality and a rude gesture.
TRIVIAL PURSUIT: This is the feature film debut of director Deniz Gamze Ergűven.
CRITICAL MASS: As of 1/15/16: Rotten Tomatoes: 98% positive reviews. Metacritic: 82/100.
COMPARISON SHOPPING: Fiddler on the Roof
FINAL RATING: 8.5/10
NEXT: The Forest 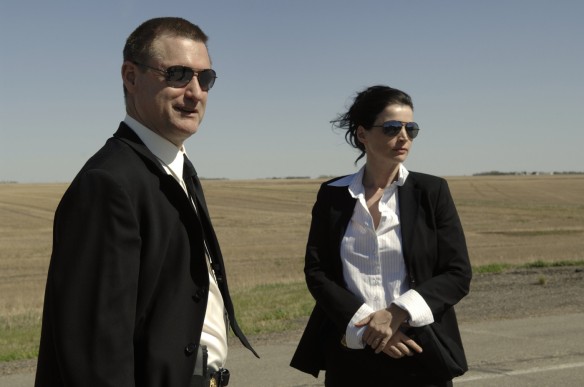 Can you tell these two are federal agents?

Life is a matter of perception. What we see, what we experience, is filtered through our own realities. Often, our own personal realities color what we see and experience and so the reality changes, each according to their own flavor.

A brutal murder takes place on a desolate  road in the middle of nowhere. Captain Billings (Ironside) of the local police wants it solved, especially since it involved police officers being filleted. And then in walks Agents Hallaway (Pullman) and Anderson (Ormond), who believe it to be the work of a serial killer they’ve been chasing.

We see what happened through the eyes of three sets of witnesses; a couple of junkies (James, Miller), a family on a road trip vacation (Oteri, Simpkins) and two corrupt and brutal cops (Stewart, Harper). The interrogation takes place in one room while Hallaway watches via closed circuit TV in another. The clues to the masked killers begin to add up and an unpleasant truth begins to get formed.

It took 13 years for Lynch (daughter of David Lynch, auteur of Blue Velvet and “Twin Peaks”) to make her second film after making Boxing Helena, a 1993 gusher about a surgeon who amputates a girlfriend’s arms and legs in order to keep her close by. I’m thinking that she has a very different idea about love and obsession than most of the rest of us.

There is a good deal of violence and brutality here. The camera doesn’t shy from the more sadistic elements of the crime, nor is there any sort of feeling that the filmmaker is either apologizing for the sadism, nor is she reveling in it. It merely is as a matter of course.

There are some fine actors here, including Ormond who is an actress who should have been a huge star; she’s incredibly beautiful and incredibly talented, but for whatever reason, audiences never warmed to her and she never got the roles she should have. Pullman is one of the more likable actors in Hollywood, but here he seems to be involved in a twitch-a-thon, going as over the top as he can. In that sense, he is the most noticeable member of the cast here and so by default, all eyes are drawn to him throughout.

Part of the problem here is that the movie takes a certain course for the first two thirds of the film and then it veers off. While I’m not opposed to that in most cases, it’s almost like watching someone who is calm and collected suddenly turn into a gibbering lunatic before your very eyes in this case. It’s kind of off-putting, especially since aspects of the movie are so unsettling to begin with. It’s definitely a dive into the deep end, if you discovered raw sewage leaking into it. There is a twist at the end but quite frankly it doesn’t come as much of a surprise, for those who are regular moviegoers at least.

Certain filmmakers have a style which doesn’t shy from the darker aspects of life. Jennifer Lynch is one; her father is another. Is it genetic? Doesn’t matter in the least. Sometimes watching movies in that vein can be difficult; it’s like identifying the body of a loved one in the morgue with a coroner who can’t stop gigging.

There are some things here worth checking out; there are also things here that are going to drive you crazy. Whatever the case may be, you won’t walk away from this with a lukewarm feeling. Love it or hate it, Surveillance is going to get a strong reaction from you.

WHY RENT THIS: I like the Rashomon style of storytelling. Pullman is at his quirky best.

WHY RENT SOMETHING ELSE: Some might find this too sadistic. Ending is a bit too muddled.

FAMILY VALUES: There is some brutal violence, kinky sex, a little bit of drug use and more than enough foul language to make this a definite hard “R.”

TRIVIAL PURSUIT: Lynch was the first woman to win the Best Director Prize at the New York Horror Film Festival.

BOX OFFICE PERFORMANCE: $1.14M on an unreported production budget; the film probably broke even or even made some money.