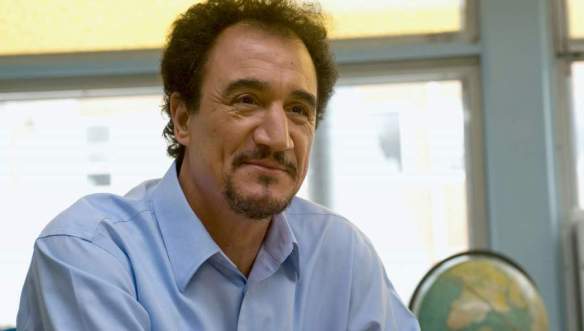 The face may be smiling but it's the eyes that are haunted.

We tend to take for granted what a strong impression teachers make on the lives of our students. Most of us can remember at least one teacher whose influence lasted throughout our lives. The student-teacher relationship can be a strong one.

In a middle-class middle school in Montreal that seems to be true. One day, however, Simon (Neron), a student in the middle school, comes to his classroom early to distribute milk and snack for the kids and discovers his teacher, Martine Lachance (Laliberte) hanging. One other student, Alice (Nelisse) also sees the body of her teacher.

The suicide shakes up everyone in the school. The principal, Madame Vaillancourt (Proulx) avails the class of a therapist but knows she has to find a teacher to fill the spot. As it is the middle of the school year, not many teachers want to fill in for a dead woman, particularly one who died so publically. However in walks Monsieur Bachir Lazhar (Fellag) who has 19 years of experience teaching in Algeria.

With no other options, Vaillancourt hires the quiet, softly smiling Algerian. At first he and his class have a rocky start. Lazhar is far more formal than the beloved Martine, ordering the desks in rows rather than the semi-circle Martine had utilized. He is also to give a misbehaving kid a little smack upside the head which of course is a strict no-no in the more liberal Canadian educational system than he’s used to.

Slowly, the kids start taking to Monsieur Lazhar, whose gentle nature seems to cut through the negative feelings they have. In fact, it seems that the kids are adjusting to the loss of Martine much better than the adults with one exception – Simon. Simon is acting out and it soon becomes apparent that he’d had some kind of run-in with Martine that might have had something to do with her decision to do what she did, particularly when she knew that it was Simon who would find her.

Movies that have children dealing with death are few in number and those that are out there are generally treacly in nature, as are those that try to deal with the student-teacher bond. Monsieur Lazhar is anything but that. It takes kids, puts them in a situation that could happen to any kid and then lets them be kids.

The kids are wonderful here; there is no posturing and it really doesn’t seem like they’re acting, a major fault among most juvenile actors. Instead, they react to the things happening around them the way most kids do – sometimes in an annoying manner, sometimes rambunctiously and other times thoughtfully. This helps elevate the movie into something far more real and compelling. Particularly exceptional are Nelisse and Neron, both who show virtuoso abilities. Should they choose to pursue acting, they both have promising careers ahead.

Fellag is marvelous himself. He carries himself with great dignity and gentle self-effacing humor here. He imbues the character with great decency, but never lets us forget the pain that is just below the surface. As what the cause of that pain is revealed, one marvels once again at human resiliency; I don’t know if I could stir myself out of bed with all that Monsieur Lazhar is carrying around with him. Fellag displays that pain not through his dialogue but through his eyes. He may have that soft smile you see above but every time you get a good look in his eyes it becomes obvious that the man is bearing a terrible burden. It’s a shame that he didn’t get Best Actor consideration at the Oscars this year – he deserved at least a look.

This movie handles things in a kind of low-key manner. Other than the scene at the beginning of the film where Simon discovers Martine, everything takes place here at a kind of slow-paced quietude. Sure the kids scream and yell as kids do but the scenes here aren’t doing so; the action is subtle but authentic. There are a lot of nice little touches – personal effects for example play an important role in the movie, as does snow – both as allegories. I found myself wrapped up in the film and the people in it; I wanted to be part of it, talking to the characters and helping them get through that. A film that inspires that kind of compassionate urge is not only one to be respected and admired, it is one to be sought out, even if you must go out of your way to do so.

REASONS TO STAY: Very low-key which some may find difficult to deal with.

FAMILY VALUES: The themes here are pretty adult and there’s one image that might be disturbing for the sensitive. There are also a couple of not-so-nice words here and there.

TRIVIAL PURSUIT: Was nominated for a Best Foreign Language Film Oscar this year as was In Darkness, a Polish-Canadian co-production which marks the first time in history that two movies with Canadian connections were nominated in that category.

COMPARISON SHOPPING: To Sir With Love

SNOW GEAR LOVERS: The kids (and adults) have a plethora of different snow apparel and accoutrements on display for those looking to enhance or upgrade their snow season wardrobe.

NEXT: Jiro Dreams of Sushi