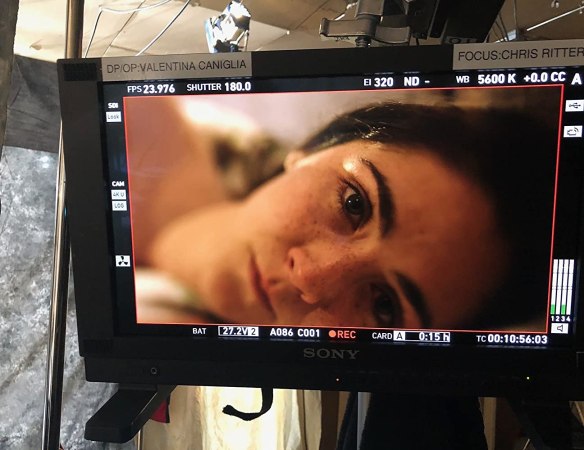 What men don’t understand about rape is that it’s not just a physical crime, although of course there are those elements that are part of it, the injuries that come with the violation. Rape is not just an attack on the physical body, it is an attack on the very essence of that person. It is, with all the ironic fury this implies, the gift that keeps on giving.

In the past few years, women have been standing up, speaking out and confronting those who have abused them – done so to this misogynistic society as a whole. Director Deborah Kampmeier – long before there was a #MeToo movement – was a crusader against rape culture, shining a light into the dark, foul recesses of misogyny. This is her most aggressive film yet.

We meet Rosa (Mud) in her dingy New York apartment as she essentially shaves her head to a buzzcut. She gives herself a homemade tongue piercing and then cuts her wrists just enough to bleed but not enough to be life-threatening. She attaches hidden cameras and microphones to her body, dons a pair of sunglasses with yet another hidden camera built in. She completes the look with black lipstick (to hide the blood on her lip) and a black trenchcoat that gives her a kind of Rose Byrne look if Byrne had been cast in The Matrix.

She heads to an audition, but she’s not auditioning. The casting call is being handled by Lux (Bishara), a slick producer. He takes a liking to Pearl (Fuhrman), a naive and eager-to-please aspiring actress who as we discover is struggling with bulimia. She’s just the kind of vulnerable sort that predators latch onto and Lux is a predator – Rosa should know because he raped her.

She is out to build a case against him, to catch him in the act. She tries to warn Pearl who is having none of it, and watches helplessly through artfully placed hidden cameras the same exact scenario playing out that happened to her earlier. This time, she’s going to catch the whole thing on tape and bring the bastard down.

There is a lot of rage in this film, and that’s okay – this is a topic that requires it. “Casting couch” has always been a cutesy phrase but this is a movie that shows the horrific reality behind it. The movie is buttressed by some powerful performances, by veteran child star Fuhrman who has turned into an accomplished actress, up-and-coming star Bishara who plays Lux with tons of charm and an abundance of aphorisms, like “Take your power” and “Own the room,” all the while setting the impressionable girl for the unthinkable. Best of all is Mudd, a screen newcomer (but a decorated off-Broadway performer) who mixes equal parts rage, creepiness, pain and heroism.

The failure in this film is behind the camera. The hidden cameras constantly move in and out of focus which I imagine is some sort of allegory but she uses it so much particularly during the first half of the film that it actually gets annoying, even to the point that I began to actually get a headache from it. The movie also is about twenty minutes too long, which blunts the powerful ending.

This is a story that needs to be told, but the problem here is not the story itself, but the way it is told. It’s a shame, really, because this should be an extremely important film and because Kampmeier decides to go uptown with it, it just comes off as more self-indulgent than it needed to be. Sometimes, when faced with a story of this importance, a wise director makes the film less about his or her skills as a director and more about the significance of a story that impacts a staggering, depressing percentage of our population.

REASONS TO SEE: An essential film for the MeToo era.
REASONS TO AVOID: This overly long film suffers from a bit too much avant garde.
FAMILY VALUES: There is profanity, some disturbing images, sexual situations, nudity and rape.
TRIVIAL PURSUIT: The experiences depicted in the film are based on those of co-star/producer Annarosa Mudd, who was raped on-camera by an unscrupulous casting director after hours of coercion during the casting process.
CRITICAL MASS: As of 3/29/20: Rotten Tomatoes: 67% positive reviews: Metacritic: 48/100.
COMPARISON SHOPPING: Black Swan
FINAL RATING: 6/10
NEXT: Blow the Man Down