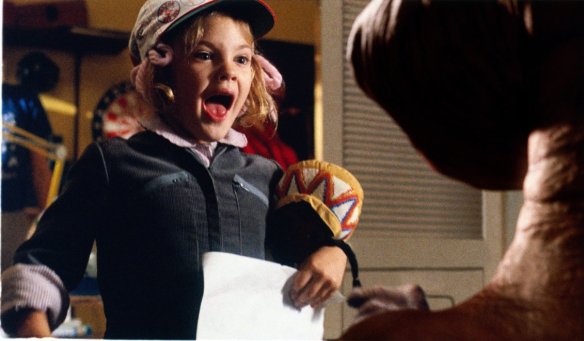 Drew Barrymore has worked with stranger co-stars than this.

Some movies become ingrained in us, a part of our childhoods – or a reminder of it. Few films fulfill that function as this one, which many consider to be Steven Spielberg’s magnum opus. While as a movie critic I would tend to say that this wasn’t the best film he ever made, it might well be the most perfect family film ever made. You be the judge.

An alien scientific expedition collecting botanical specimens in Northern California are interrupted by the appearance of government agents; they flee in their spaceship. In the chaos, one of their members is left behind. The extra-terrestrial – E.T. – finds a hiding place in a shed in a suburban yard.

One of the residents of the house, Elliott (Thomas) discovers the alien. He forms a bond with the creature that is both emotional and psychic – they feel what the other is feeling. Eventually he lets in his five-year-old sister Gertie (Barrymore) and older brother Michael (Macnaughton) in on his secret. His mother (Wallace), recently separated from their dad, is left blissfully ignorant.

Eventually it turns out that E.T. is getting seriously ill – and so is Elliott. E.T., knowing that he’ll die if he doesn’t get home, constructs a make-shift communications device that will allow him to “phone home” using a Speak N Spell, a foil-covered umbrella and other household items (the device, constructed by science educator Henry Feinberg, supposedly worked). When E.T. and Elliott become close to death, the government agents finally appear, led by a man with an impressive key ring (Coyote). However, when it appears that E.T. has expired, it turns out that love is a wonderful thing that can make miracles happen.

The film was a sensation when it was released in my senior year at Loyola Marymount, and would briefly become the all-time box office champion until Spielberg himself surpassed the mark with Jurassic Park nearly a decade later. It remains a favorite among families and is one of the all time home video best-sellers.

Part of what is marvelous about E.T. is how believable the kid actors are. In an era when cutesie kids were the norm rather than the exception, Thomas, Macnaughton and Barrymore were exceptional here. They acted like real kids and never seemed to be “forcing it,” never even seem to be acting. In a movie where no adult face other than the mom’s is seen until nearly an hour in, you need to have good juvenile actors for it to work for all audiences and fortunately for Spielberg, he got three good ones (both Thomas and Barrymore went on to exceptional careers, Barrymore in particular). Coyote has to convey both menace and elicit sympathy and he does so. Despite the scariness of the government agents, there really is no villain here – a nice message.

Of course, the real star here is E.T. himself, a creation of Italian sculptor Carlo Rambaldi. While primitive by today’s standards, E.T. lived and breathed for the children of the era and while today the technology is a bit dated and the look of E.T. less than scintillating, for its time though the movie looked amazing.

Like many Spielberg movies, there is a definite suburban feel to it. Spielberg was one of the first directors to make his films in a suburban setting (the original Poltergeist which was filmed concurrently with Spielberg acting only in a producer’s role was the flip side of E.T. – whereas E.T. was a suburban fairy tale, Poltergeist was a suburban nightmare) and remains one of the best for conjuring a suburban vibe. That works as a double-edged sword here; the movie has a kind of safe feel to it that kids from poorer environments might regard with a puzzled expression, and the cast is as lily-white as can be. The only (illegal) alien here is E.T. himself. I imagine Donald Trump would want him deported.

E.T. is a part of our cultural landscape – lines like ”E.T. phone home” and the image of kids on bicycles flying in front of the moon are familiar to nearly everybody in the Western world as is John Williams’ iconic score. There aren’t many movies that can be said to be beloved but this is certainly one of them. Likely everyone reading this has this movie wrapped up in childhood memories – if not their own then in the memories of their own children growing up. E.T. is one of a select few that can say that.

WHY RENT THIS: An iconic film that recalls childhood. Charming and heartfelt.
WHY RENT SOMETHING ELSE: A little bit dated and a little bit suburban.
FAMILY VALUES: Some peril.
TRIVIAL PURSUIT: The doctors and nurses who work on E.T. are actual emergency room personnel. They were told to work on the puppet as if it were an actual patient so that their dialogue would seem authentic.
NOTABLE HOME VIDEO EXTRAS: There are some on-set video diaries, a featurette about the 2002 cast reunion, two featurettes on the iconic John Williams score, a Special Olympics TV PSA, and several photo galleries – all on the Blu-Ray edition. The Blu-Ray has the original theatrical version; the 2002 Anniversary edition has a digitally enhanced version of the film which got jeers from audiences and critics alike for the additional CGI which frankly was distracting.
BOX OFFICE PERFORMANCE: $792.9M on a $10.5M production budget.
SITES TO SEE: Netflix (Blu-Ray/DVD Rental only), Amazon, iTunes, Flixster, Vudu
COMPARISON SHOPPING: Close Encounters of the Third Kind
FINAL RATING: 9.5/10
NEXT: Kensho at the Bedfellow