All the Governator needs is a big gun and a trigger to shoot with.

It’s just a few days before the end of the 20th Century. New York City is gearing up for the biggest party of the Millennium, but there’s an uninvited guest – Old Scratch, who has been waiting for this shindig a lot longer than Mayor Giuliani. For, y’see, he’s got a wedding to go to – his own – and once the union is consummated, it’s curtains for mankind. Yeah, he’s gonna party like it’s 1999.

Enter Jericho Cane (Schwarzenegger), an ex-cop now making his living as a security guard, still grieving over the deaths of his wife and daughter at the hands of the mob, using the bottle to help him cope. When his charge, a Wall Street investment banker (Byrne) is attacked by a deranged Roman Catholic priest, Cane and his partner (an amusing as usual Kevin Pollack) start digging into the attempted murder and discover more than they want to.

As is usual with most devil movies, a lone, imperfect hero fights an implacable, insurmountable foe with little more than his lack of faith to sustain him. Byrne makes a charming Satan – less over-the-top than Al Pacino’s Lucifer in Devil’s Advocate. Byrne underplays Satan as a subtle, affable fella – who rather than fly into a demonic rage when provoked instead creates terrifyingly sudden acts of violence without much of a change of expression.

Schwarzenegger is surprising here, showing a depth of pain he usually doesn’t convey. He kicks patootie, sure, but he’s a very flawed and vulnerable man, who can cry for a lost family in moments of weakness. He has lost faith in his religion, in the system and finally, in himself. He neither wisecracks his way through flying bullets, nor does he bravado his way around falling chunks of masonry; he merely survives everything that is thrown at him. Early on, when he is hit by sniper’s bullets, instead of shrugging off the wounds, he stays down to the point where his partner calls him a wuss. Imagine, the Terminator a pantywaist. Unthinkable.

Also worth noting are Steiger as an irritable priest who holds the answers to most of Schwarzenegger’s questions, Tunney as the object of the Devil’s affections and Pounder as an officious detective. As devil movies go, the cast is as strong as any since The Exorcist, which remains the benchmark for the genre.

Lots of whiz-bang special effects, lots of things go boom, plenty of female breasts. What’s not to like? Well, the main failing of most devil movies is that the devil is vanquished a bit too abruptly in a bit too cliché a manner. Also, there are a lot of logical flaws; throughout the movie, Satan kills with a crook of his fingertips, and shows no hesitation in doing so. Why not simply dispatch Ah-nold and take out his only obstacle to a successful Armageddon?

End of Days is a visual treat and, with only a few semi-dead spots, an exciting ride. Even given Schwarzenegger’s surprising acting skills, it may not appeal to those with genuine end of the world Millennium fears. Just don’t hate it ’cause it looks beautiful.

WHY RENT SOMETHING ELSE: A bit dated, particularly in it’s end-of-the-world-Y2K stuff.

TRIVIAL PURSUITS: Sam Raimi, Marcus Nispel and Guillermo del Toro were all offered the director’s chair for the movie at one time or another and all turned it down.

BOX OFFICE PERFORMANCE: $212M on a $100M production budget; the movie made a little bit of money. 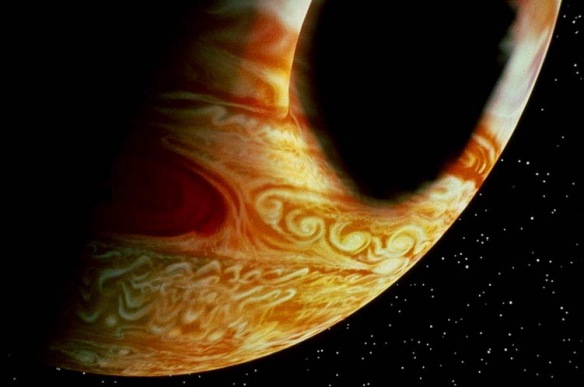 Jupiter should have used SPF-50.

2001: A Space Odyssey is considered by many to be one of the pre-eminent science fiction movies of all time – in fact, many see it as one of the best movies of all time period. In 1984, director Peter Hyams (Outland) took on the ambitious and daunting task of filming the sequel, which author Arthur C. Clarke wrote in 1982. While Hyams added his own elements and changed many of Clarke’s, nonetheless the framework was unchanged and the message remained the same.

Dr. Heywood Floyd (Scheider), former head of the NCA, was the catalyst behind the ill-fated voyage of the U.S.S. Discovery to Jupiter following the discovery of a black featureless rectangular monolith buried in a lunar crater back in 2001. During that trip, the HAL 9000 computer (voiced by Rain), the most advanced artificial intelligence ever designed, went psychotic causing the deaths of Astronaut Frank Poole and the scientific team in hibernation onboard. After Astronaut David Bowman (Dullea) disconnected the computer, he encountered a gigantic monolith – with the exact same features and dimensions of the lunar monolith – floating in space between Jupiter and its moon Io. After going out to investigate, Bowman disappeared but not before leaving behind a puzzling final transmission: “My God, it’s full of stars!”

This has haunted Floyd in the nine years since the Discovery incident. He has left the NCA for an academic position. One afternoon, he is visited by a Russian scientist (Elcar) who chats cryptically about the Discovery and informs Floyd that the Russians are planning a mission to the Discovery that will arrive a full year ahead of the American one. He proposes that the Americans tag along on the Russian vessel. Floyd is skeptical, but then the Russian points him in the direction of a shocking new development; the Discovery has changed its position and has moved towards Io and is in danger of crashing to its surface. There is no explanation as to why it had done that.

A joint Soviet-American mission is a lot more of a difficult sell than you can imagine. Tensions between the two countries are at an all-time high due to an unspecified ongoing crisis in the Honduras. The leaders seem ill-disposed towards acting sensibly and nuclear war is a very real possibility. Most of the people on the planet are in fear for their lives. Still, after Floyd goes to the new head of the NCA (McEachin) with the information, he manages to convince his replacement to go to bat with the president for the idea – with Floyd one of the astronauts to be sent to Jupiter to discover just what went wrong aboard the Discovery.

Accompanying Floyd will be Dr. Chandra (Balaban), the brilliant designer of HAL 9000 and its successor SAL 9000, and engineer Walter Curnow (Lithgow) who designed many of the systems aboard the Discovery. Commanding the Leonov is Commander Kirbuk (Mirren), a hard-as-nails by-the-book military commander (notice that Kirbuk is Kubrick spelled backwards – sorta) who butts heads with Floyd from the beginning. Suspicious of the Americans, she and her crew are not the most co-operative of sorts. However, they do grudgingly confirm that they have discovered the presence of chlorophyll on the surface of Europa – an icy moon of Jupiter where no signs of life previously existed. The Leonov sends a probe to investigate but this ends in the destruction of the probe before any meaningful data can be discovered.

At last, the Leonov reaches the Discovery and at last the mystery of the monoliths and the madness of the computer might be explained. However, you know what they say about curiosity – and finding the answers to these mysteries may cost the crew of the Leonov their lives.

The tendency is to compare 2010 with its predecessor and in many ways that’s quite unfair. 2001: A Space Odyssey is, as I mentioned, one of the most honored films of all time. It’s a lot like comparing Gods and Generals to Gone with the Wind; the former is a solid film on its own merits but doesn’t really compare to the classic latter. Hyams is a competent filmmaker in his own right, but he is no Stanley Kubrick, as Hyams I’m sure would be the first to confess. His storytelling technique is more straightforward, which makes 2010 a more accessible movie in a lot of ways.

By our standards, the special effects are primitive, although they were cutting edge for 1984 when the film came out. Still, taking that into account, it’s still a very watchable film, even if the computers look clunky when compared to, for example, iPhones. One has to look past that and try to concentrate on the story and the performances.

While the Soviet-American tensions seem hopelessly dated (the Berlin Wall would fall a mere seven years after the movie came out but while it was being made, the ideological conflict was in full bloom), some of the other aspects of the movie are prescient; for example, widespread use of portable computers and voice activated controls. We are finding out more about Europa and its potential for harboring life.

Scheider was one of Hollywood’s most dependable leads, having done such films as Jaws and Hyams’ own Blue Thunder. He is in his element here as the irreverent and maverick scientist Floyd. He plays nicely off of Mirren, who hadn’t yet reached the stature as an actress that she has today. Her character is essentially one-dimensional, but Mirren gives her at least as much depth as the script will allow. Fluent in Russian (Mirren’s father was Russian-born – her birth name is Mironov – and Russian and English were both spoken in her home), Mirren lends authenticity to her character and while she is something of a cliché (the Americans are always right, the Russians are always mulish), she remains someone you want to root for even if the writers didn’t always allow you to.

Its eerie seeing Keir Dullea as Bowman, the role he originated 2001. De-aged by make-up artist Michael Westmore, he looks uncannily ageless. When I first saw the film in theaters, I actually got shivers up my spine.

I will admit to being somewhat overly lenient towards science fiction films, so do take that into account when reading this. There’s something to be said for watching two enormous spacecraft orbiting near Jupiter. While some of the movie seems dated (which seems odd for science fiction which is intended to be forward-looking), certainly it remains a very watchable, mostly enjoyable science fiction movie. Some of the intelligence of Clarke’s original work remains, but this is meant to be more entertaining than illuminating. For what it is meant to be, it succeeds. Just don’t expect to see psychedelic visuals at the first strains of Also Sprach Zarathustra.

WHY RENT THIS: Solid performances by most of the cast. The de-aging of Dullea as Astronaut David Bowman is astonishing.

WHY RENT SOMETHING ELSE: Some of the special effects, while cutting-edge for their time, are laughably primitive. Those who measure this by Kubrick’s movie are going to find this sorely lacking.

FAMILY VALUES: By 2010 standards, there’s nothing in this movie that a good parent would object to.

TRIVIAL PURSUIT: The voice of the SAL 9000 computer during the University of Chicago Computer Lab scene is voiced by Candice Bergen, operating under a pseudonym. She is credited, somewhat cheekily, as Olga Mallsnerd, combining the names of her then-husband (director Louis Malle) and one of her father, Edgar Bergen’s, most beloved characters Mortimer Snerd.

TOMORROW: Did You Hear About the Morgans?