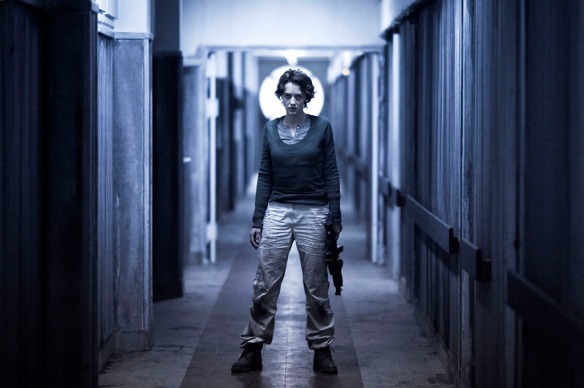 Never mess with a pregnant lady; those hormones are murder!

Love conquers all, they say and for the most part they’re right. Love conquers separation, distance, even unfaithfulness. But does love conquer a mutation-inducing virus?

Sonia (de Fougerolles), an ER attending physician and her boyfriend Marco (Renaud) are trying to survive in a world that has been decimated by a virus that turns people into ravening flesh-eating lunatics – zombies as it were only not dead. However, as the minds and personalities of the victims disappear under the influence of the virus, it is a kind of death.

The two manage to fight their way to a military base where (they hope) they’ll find safety. However when they get there they find the base mostly deserted except for a few refugees and plenty of mutants/zombies, one of whom infects Marco.

Sonia desperately tries to nurse her man back to health, believing against hope that she’ll figure out a away to cure him before he turns into one of the creatures. She has good reason to – she carries his baby and wants that child to know its father someday. However as Marco slowly begins to change into one of the mutants, Sonia comes to the realization that if she can’t save him, she will be forced to destroy him in order for her and her unborn child to survive.

The French have gotten adept at horror over the past decade (not that they were ever slouches at the genre). Movies like High Tension and Inside are some of the better films in the genre during that time. This one is kind of in the middle of the pack, a little bit better than average but not so much so that will garner it a whole lot of notice.

In fact, it was essentially sent directly to VOD and then home video without any sort of theatrical release in this country, and it didn’t get much more than that anywhere else. That’s kind of puzzling because it really isn’t that bad. There is plenty of state-of-the-art zombie gore and a nice sense of tension built by Morlet, who proves himself a competent director given the claustrophobic sets of the military base and the washed-out winter settings of the exteriors.

De Fougerolles is given a nice meaty role (no pun intended) which she handles quite nicely. To be honest I’m not familiar with her work, but here at least she puts on a memorable performance. Sonia is put into a horrifying position; to me the true horror of the film is not the viscera and gore but the choice she is forced to make. Anyone who has watched a loved one waste away will sympathize but on top of that she knows at the end of the road that same loved one will turn into a monster who will threaten not only her life but the life of herself and her unborn child.

Sonia is almost child-like in her faith. Some hardcore horror bloggers have blasted her for being a ninny – “Just put a bullet through the f***ers head” groused one but then again, some of these hardcore horror bloggers have never had a girlfriend so they have no frame of reference to go by. De Fougerolles handles the action sequences nicely as well – fully half of the points I’m assigning to this film are due to her performance.

Most times movies that go without any sort of theatrical release do so for a reason. They’re either just plain awful or so amateurish that they look like somebody’s YouTube video shot via cell phone on the big screen, and that’s never pleasant. This one is not only a good-looking film it’s pretty solidly made. Sadly it never got the distribution it should have nor the acclaim it deserved. Still, it’s available in a variety of home video formats and while it might not be super-easy to find, it is well worth the effort for fans of good, thought-provoking horror films. As such it is a very pleasant surprise.

WHY RENT THIS: Emotionally wrenching. Some truly nifty zombie effects, albeit nothing groundbreaking.

WHY RENT SOMETHING ELSE: A little too close for comfort to the 28 Days/Weeks Later films. Drags in the middle.

FAMILY VALUES:  There is plenty of violence and gore and zombie goodness.

TRIVIAL PURSUIT: The movie was filmed in Picardy during the winter, with sets built to deliberately accent the grey, grim landscape, the interiors likewise to mirror the bleak exterior outdoor shots.

NEXT: Wrath of the Titans