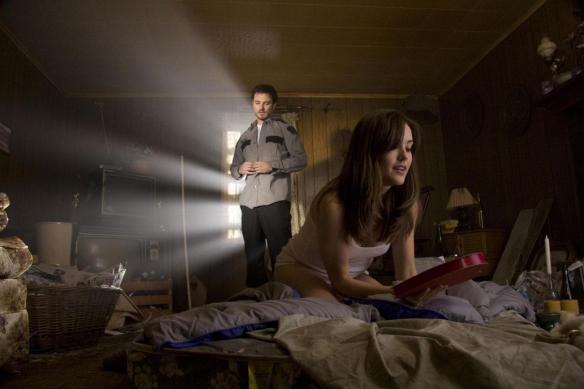 The thing about doing remakes of other movies is that the screenwriter has to walk a very fine line. The movie has to follow the story of the original enough so that it is recognizable, yet it has to have its own character and flavor, differing enough to offer viewers familiar with the original a surprise. Otherwise, why bother?

This remake of a 1981 cult favorite during the golden age of slasher movies begins with a cave-in caused by Tom Hanniger (Ackles), the young son of the mine owner. Not on purpose mind you – just inexperience. Five miners are buried beneath the rubble but by the time they dig them out, only one has survived – Harry Warden (Walters) who owes his survival to killing off the other four so that they don’t take up his air. Even so, it takes so long to dig down that Harry is in a coma for a year. When he wakes up, he walks out of the hospital, dons his mining clothes and proceeds to kill 22 people with his pickaxe before being shot dead by then-Sheriff Burke (Atkins).

Flash forward a couple of decades. The town of Harmony is preparing for a Valentine’s Day dance, the first one since Harry Warden had his little tantrum. Tom Hanniger, who had left down not long after the murders, has returned to sell off the family mine. He isn’t greeted particularly warmly except by his high school sweetheart Sarah (King) who is now married to his friend Axel Palmer (Smith) who happens to be the current sheriff. Axel is probably the least happy guy to see Tom particularly since there’s some evidence that Sarah is still sweet on him. Of course, the fact that he’s been cheating with Megan (Boone), Sarah’s employee, for years doesn’t seem to bother him any.

There are plenty of red herrings here as to who the identity of the killer is although the filmmakers are certainly pushing a supernatural angle. What’s worrisome is that the filmmakers cheat a little bit – major bits of business take place offscreen and things that are shown onscreen turn out to be lies. I get it that the filmmakers want to make the identity of the killer a surprise when the reveal comes but for one thing any halfway experienced horror film fan will be able to figure it out pretty quickly and for another thing when you do find out who it is you’re going to feel a little cheated, something you don’t want your audience to feel.

Another thing you don’t want your audience to feel is bored. During the first 15 minutes, the carnage moves at a breakneck pace but afterwards slows into a hodgepodge of flashback and exposition with the terror scenes spaced out in ten to fifteen minute intervals. Once you establish a pace, it’s a bad idea to slow it down. Better to build towards it gradually than gradually come down from a peak. You don’t want your audience feeling that they’ve seen the best of the movie less than half an hour in.

There are some great 3D effects here (the for-purchase DVD comes with glasses, although of course you need a 3D television set to play them), some of the best in fact of the modern 3D era. Eyeballs and jawbones fly at the audience and pickaxes come through the screen so jarringly that you will jump out of your seat.

There is a great sequence at the local no-tell motel in which town skank Irene (Rue) fresh from a rendezvous with her trucker boyfriend is chased out of her motel room stark naked after said boyfriend is skewered. She tries to get help which only succeeds in getting another trucker punctured but let’s just say that the sequence moves into overdrive from that point.

Lussier, who has a long history as both an editor (for the Scream series) as well as a director (for such films as Dracula 2000 and Drive Angry), has some punch in terms of technique but he is betrayed by clunk dialogue and some incongruous situations, not to mention the aforementioned cheats. It definitely is a throwback to the slasher films of yore given the amount of gore and nudity, so there is that bit of nostalgia involved. Unfortunately, too many flaws sabotage what could have been a truly excellent remake that might well have exceeded the original otherwise.

WHY RENT THIS: The first portion of the movie is a great roller coaster ride. Great use of 3D.
WHY RENT SOMETHING ELSE: Bogs down in flashback and exposition during the second half.  Cheats when it comes to keeping the identity of the killer a surprise.
FAMILY VALUES: Brutal violence and gore, graphic nudity and explicit sexuality, foul language, gruesome images…this is horror movies the way they used to make ’em.
TRIVIAL PURSUIT: The first two characters to die in the movie are named Jason and Michael in direct reference to the Halloween and Friday the 13th characters. Like the characters, they don’t have any lines and both men die in ways that recall the trademarks of the characters they are referencing.
NOTABLE DVD EXTRAS: There’s a gag reel and a featurette on the practical make-up effects.
BOX OFFICE PERFORMANCE: $100.7M on a $15M production budget.
SITES TO SEE: Netflix (DVD only), Amazon (purchase only), Vudu (rent/buy),  iTunes (rent/buy), Flixster (purchase only), Target Ticket (not available)
COMPARISON SHOPPING: I Know What You Did Last Summer
FINAL RATING: 5.5/10
NEXT: Six Days of Darkness continues!