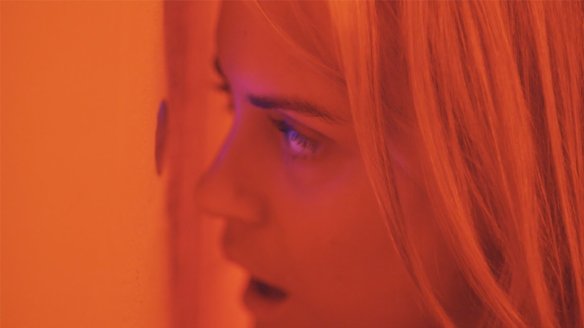 Moving to a new city can be a daunting experience, particularly when you don’t know anyone there. We all need a social outlet and finding one in a new place can be something of a priority.

That’s the situation that Alex (Scott) and Emily (Schilling) find themselves in when they relocate from Seattle to the trendy Silver Lake section of L.A. She’s the breadwinner and he works from home and watches their young son R.J. (Hermes). He needs some adult conversation. While at a party for another kid, R.J. hits it off with Max (Moritt). Max’s dad, Kurt (Schwartzman) comes on a little strong at first but he seems to think that the two of them should be friends with he and his wife Charlotte (Godreche). He invites them over for a casual pizza dinner and some playtime for the kids. Alex and Emily readily agree.

It turns out that Kurt has quite the McMansion, more or less tastefully furnished. Everything starts out pretty mellow with plenty of pizza and wine, with Kurt turning out to have a pretty natural rapport with kids. It’s after the kids go to bed that things start to get weird. Turns out that Kurt, who fancies himself something of a renaissance man, has a talent for painting anuses. No, you read that right. He’s got dozens of paintings of bungholes (mostly Charlotte’s) in his studio.

And as Emily discovers, Charlotte is quite the free spirit. She dabbles in massage, but not the kind you find in your local spa – the kind with happy endings, as Emily is shocked to discover. While Emily and Alex aren’t necessarily prudes, they’re both a little bit on the uptight side. Alex is fairly sensitive about the size of his junk, and is especially intimidated when he discovers that in addition to everything else, Kurt is also hung like a horse.

Still with enough pot and champagne swimming in their bloodstreams, Emily and Alex are able to let loose a bit. Then a bit more. And then things get really strange.

What works here is the chemistry between the leads. In particular, Schwartzman does some of the best work of his career as the somewhat pompous and out there Kurt who is basically a decent guy who has kind of bought into the whole L.A. thing – it’s an easy temptation, I can tell you – and is kind of a douchebag because of it, but he’s not really a douchebag deep down. That’s fairly complex, but Schwartzman pulls it off.

Scott is becoming a very reliable comic actor with big things ahead of him. I liked him a lot in A.C.O.D. and I like him a lot here as well. He is pleasant enough even when the situation around him is crazy as can be but he seems nonplussed by the insanity. He also makes a very attractive couple with Schilling, who is a versatile actress who is mainly the straight woman here but she has her comedic moments as well.

This is definitely L.A.-centric and those who delight in dissing the City of Angels will have a field day here. Those who love the city as I do will be reminded of summer nights in the City, which can be among the nicest things you can experience in life. Still, the movie is anything but laid-back.

Much of the humor comes from awkward situations which can be…awkward. Still you have to admire a movie in which characters utter the lines “giant horse cock” and “I have an abnormally small cock” in the same scene. You just can’t get that anywhere else but here.

Like most movies, this one knows that the world’s most dangerous question is “Do you find me attractive” and that there’s no answer that doesn’t end badly once it is asked. Not all of the humor works here but when it does it is big laughs. On the balance, this is a rare breed of movie that walks the tightrope that is adult sex comedies. It occasionally falls off the wire but to its credit it gets back on and starts walking forward again, and that’s worthy of respect. This is solidly entertaining, rather funny and likely to be one of those movies that people will look at when Schwartzman, Scott and Schilling become A-list stars.