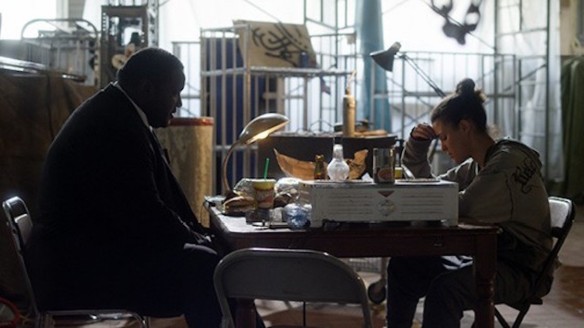 This hideout could use a cleaning service.

In our current society, self-help has been taken to new heights. We have become so self-involved, so self-focused that we have stopped seeing ourselves as part of anything larger. We’ve become all about getting everything we can for ourselves and everyone else can go screw themselves. It’s not a society that is pretty.

Patrick Spencer (Thicke) is a self-help guru who has gotten rich preaching “me first” to the choir. Masses of people have bought his books and attended his speaking engagements all chanting his mantra “It’s not my fault and I don’t care anyway” like robots, a means of absolving themselves of responsibility for anything. Patrick, a former alcoholic, is really good at that.

His daughter Diana (Doz) can attest to that more than most. Her relationship with her Dad is a rocky one indeed. She watched her mother (Frederick) grow more and more morose until she divorced Patrick; once she got the divorce settlement that would allow Diana to live decently, she took her leave of this life. Diana turned to drugs and sex.

Brian Calhoun (Aaron) grew up with loving parents, although things ended badly for them. Brian is called “Giant Man” around the neighborhood (not a terribly imaginative nickname) for his size which is impressive. It also comes with a price; Brian knows that his lifespan will be much shorter than most. Alone and miserable, Brian becomes a heroin addict and his size brings him to the attention of Johnny Three Fingers (Lipscombe), a vicious drug dealer and crime boss. Johnny needs an intimidator, something his right hand men Moose (Belcourt) and Lil’ Charles (McCusker) aren’t really capable of.

But Lil’ Charles has been seeing Diana and discovers her daddy is rich. When Johnny finds out about this, he decides a kidnapping and ransom would be in order. What he failed to reckon with that Patrick is so self-centered that he refuses to pay a ransom for his daughter; if she dies, after all, it’s not his fault and he doesn’t care anyway.

The two cops assigned to the case, Detective Elizabeth Stone (Planche) and her partner Smitty (Joshee) are dumbfounded by this but nonetheless go about trying to solve the case and, hopefully, rescue Diana. Brian who is really a gentle giant however doesn’t want to see her get hurt and together the two come up with a plan but it is a dangerous one.

This Canadian film is one of the last appearances of the late Alan Thicke, who is best known for playing the dad in Growing Pains, a hit sitcom back in the 80s. This is a far different role than Dr. Jason Seaver was for him. In a lot of ways, it’s a very savvy character particularly attuned to the modern man. He’s very charming but not always likable and I suppose that’s what our society values these days. Craddock, who based this on his own one-man play, picked up on that nicely.

The film is essentially told in flashback by four of the main characters in a kind of confessional way. Patrick discusses the incident at one of his self-help speaking engagements. Diana talks about it at a sex addiction group therapy session. Brian tells his side of the story during a police interrogation after the act. Finally Detective Stone is interviewed about the story by a journalist (Benzer).

The most compelling story belongs to that of Brian and in all honesty Aaron is the most likable actor in the group (with all due respect to Thicke). Aaron, who most might remember playing Big Mike Oher in The Blind Side, has a very sweet nature and while it’s hard to believe him as a heroin addict he manages to make the part his own anyway. His story tended to be the one I enjoyed the most.

There is a wry tone to the humor which is rather dry and that isn’t necessarily a bad thing; I enjoy the change of pace from most of the comedies we’ve been getting lately in which the humor is broad. However, it isn’t as funny as I would have liked and at times the energy is lacking. Part of the problem is that much of the film is static; we’re watching the characters sitting in chairs talking about the kidnapping and their lives up to that point.

This almost feels like a made for TV movie other than the graphic sex scene that comes out of nowhere and the fairly consistent use of profanity which one might expect from criminal sorts. Still, if you’re going to do that I think you need a little bit more punch. Not that there isn’t any – it’s just that there are so many talking head interludes that it disrupts the flow of the film.

Essentially this is available on VOD through various streaming services so that’s your best bet if you want to see this. It’s not a bad film but it isn’t very compelling either. I like that this is essentially about our move towards selfishness but it needed a bit more energy to make it work better.

REASONS TO GO: Aaron is a very compelling and likable performer. The humor is a little drier than usual which is quite welcome.
REASONS TO STAY: At times, the film gets a little bit too maudlin. The energy is missing at times.
FAMILY VALUES: There is plenty of profanity, some fairly graphic violence, some sexuality, drug use and nudity.
TRIVIAL PURSUIT: Both Thicke and Lipscombe penned and performed tunes on the soundtrack.
BEYOND THE THEATERS: Amazon, Google Play, iTunes, Vimeo, Vudu, YouTube
CRITICAL MASS: As of 3/17/17: Rotten Tomatoes: No score yet. Metacritic: No score yet.
COMPARISON SHOPPING: Ruthless People
FINAL RATING: 5/10
NEXT: The Last Word