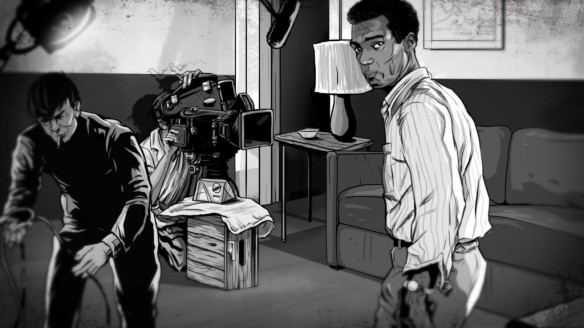 The secret to creating an iconic horror film is not found in a cartoon.

There is no doubt that circa 2012, zombies are the new cool. The success of the comic turned basic cable TV hit The Walking Dead has contributed mightily to that but there is nobody with any sort of historical perspective at all who won’t admit that without Night at the Living Dead, zombies would be relegated to a kind of horror film B-movie ghetto.

Romero was a young college dropout in Pittsburgh back in 1968 when he decided to make a movie on his own. He, like many other Pittsburgh-based filmmakers, worked on the children’s television program Mister Rogers Neighborhood (one of Romero’s vignettes, Mr. Roger Gets a Tonsillectomy is shown and I kid you not, it is one of the most terrifying things you will ever see) as well as local advertisements.

The movie was largely shot on a wing and a prayer with investors and local TV personalities appearing as actors, zombies and occasionally as technicians. It was shot on the fly and with an almost non-existent budget. It got little or no positive press mainly because it broke so many taboos – an African-American hero whose race is never commented upon in the film, children murdering and eating their parents, zombies chowing down on living, screaming victims.

Largely over time, the movie has grown from cult status into a cultural touchstone. Within the context of its time when race riots were running rampant, the counterculture was protesting the war in Vietnam with increasingly violent repression from the government in reprisal and a general distrust of the American dream of their parents by an entire generation of young people, Night of the Living Dead was almost inevitable – if Romero hadn’t made it, someone else might well have made something like it. It’s unlikely however that anyone else would have blown off Hollywood movie conventions as easily as Romero did; while he essentially claims he didn’t know any better, I honestly believe that his innovations were done deliberately.

This documentary examines the film and it’s time, largely through interviews of critics, writers, academics and filmmakers (including Hurd, producer of The Walking Dead). There are also some nifty illustrated/animated sequences drawn by Gary Pullin that give the audience an insight into the production itself.

Because of the focus on a single film, Kuhns is able to drill down and really examine the movie’s historical, political and cinematic influence and the implications it has had on modern society and movies, not to mention it’s continuing influence on American culture. Romero is a delightful interview whose engaging personality is such that you wouldn’t mind watching two hours of talking head interviews with the man. Between the Romero interview and the illustrations as well as extensive footage from the movie itself and some archival footage of events of the day, the documentary is anything but dry. While those who don’t like the original movie might find this dull, if they are into history and social studies at all they will still find this fascinating. While the focus is definitely on Night of the Living Dead, you don’t have to be an obsessive fanboy to appreciate Year of the Living Dead. If you are, however, you may just want to demand your local art house get a copy of the movie so that you can spend your nights wrapped up in this well-made and thoughtful analysis of one of the great movies of all time.

REASONS TO GO: Romero is an engaging storyteller. Filmmakers really drill down and don’t just get backstage anecdotes but place the movie within the context of its time.

REASONS TO STAY: Those who aren’t fans of Night of the Living Dead will find this dull.

FAMILY VALUES:  A few disturbing horror images and a bit of foul language.

TRIVIAL PURSUIT: The interviews for the film were conducted between 2006-2011.

CRITICAL MASS: As of 4/13/13: Rotten Tomatoes: no score yet. Metacritic: no score yet; the movie has made a few appearances on the festival circuit.

NEXT: First Comes Love and more coverage of the 2013 Florida Film Festival! 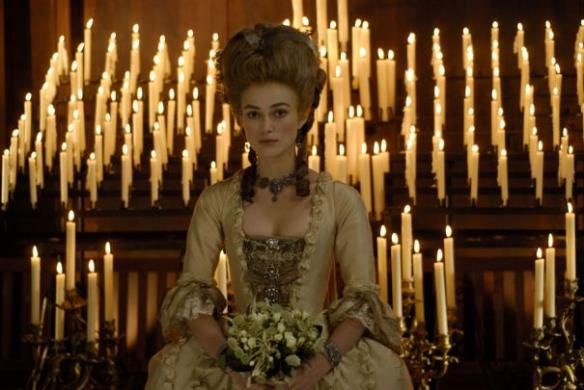 Burning the candle at both ends.

We are fascinated with the lives of the rich and famous; add royalty to the mix and we have a real hard time looking away. Look at how we reacted to the recent royal wedding, or its predecessor of Charles and Diana – we couldn’t get enough. This isn’t a new phenomenon; it has existed for a very long time, including in the 18th Century when a woman who was a direct ancestor of Princess Diana captivated England.

Georgiana Spencer (Knightley) is a vivacious young girl when she is promised in marriage by her mother (Rampling) to the Duke of Devonshire (Fiennes). Georgiana at first is thrilled by the arrangement; she is to be a Duchess! However, things don’t turn out to be quite the fairy tale that she imagined.

For one thing, the Duke is as taciturn and colorless as she is colorful and lively. He could make a rock look like a positively sparkling conversationalist whereas she is witty and opinionated. He is more interested in producing an heir and doesn’t really have any feelings towards her whatsoever; she is naive and a bit starry-eyed. Their lives come into a collision course.

Dissatisfied that she is unable to provide him anything but daughters, he starts seeking other women out. She has flings with politics and politicians (including future Prime Minister Charles Grey) as well as with men and women both. She becomes an icon of fashion (much like her descendent) and a voice in politics but her antics would land her in a good deal of hot water…and cause her much grief and sorrow.

As costume dramas go this is pretty nifty. They have a tendency to be ponderous and slow, and so this one is in places, but Knightley and Fiennes elevate it beyond the average petticoat soap opera. Fiennes goes the understated route and that works very well here. Devonshire is a bit of a jerk, but he is also a product of his times. His priorities lay in preserving his lineage (which Georgiana was eventually able to help him do) and in living a fairly scandal-free life, which as not possible as long as Georgiana was politically active. Their marriage was tumultuous at best; he took up an affair with her best friend and moved her into the house.

Knightley has generally done pretty face roles generally in period dramas or action films but she shows off her potential as an actress here. She has the charisma and charm to pull off a character as complex as the Duchess but she also manages to portray her anguish, her frustration and her doubts. It is a well-rounded performance that puts lie to the reputation that Knightley can’t act – not only can she but she has the potential to be extraordinary.

The film won an Oscar for Best Costume Design which it richly deserve and frankly had to have, in order to maintain the real Georgiana’s spectacular fashion sense. It was also nominated for Art Design. In short, this is a beautiful film to look at from the authentic locations, the elaborate costumes to the scenery and the sets.

By all accounts Georgiana Spencer was an incredible woman who has largely been forgotten except by those who study the minutiae of history and by her own family. That’s largely a shame; though her life wasn’t always a happy one, she did nonetheless pave the way for women to become more of a force in politics more than 200 years later. She deserves better than to be a mere footnote in history.

WHY RENT THIS: An interesting look at a figure in history rarely remarked upon in modern times. Knightley does some of her best work ever.

WHY RENT SOMETHING ELSE: Moves ponderously slow in places.

FAMILY VALUES:  There is some sexual content and a little bit of nudity. Some of the dialogue and situations might go over the heads of the innocent.

TRIVIAL PURSUIT: Some of the costumes worn by Knightley in the film were based on dresses seen in actual portraits of Georgiana as well as political cartoons depicting her from the time.

NOTABLE DVD EXTRAS: There is an interview with Georgiana Spencer’s biographer who discussed letters written by the real Duchess to her mother that gave her insight into the character of the historical figure..

BOX OFFICE PERFORMANCE: $43.3M on an unreported production budget; the movie more than likely broke even at least, but probably made a few bucks.