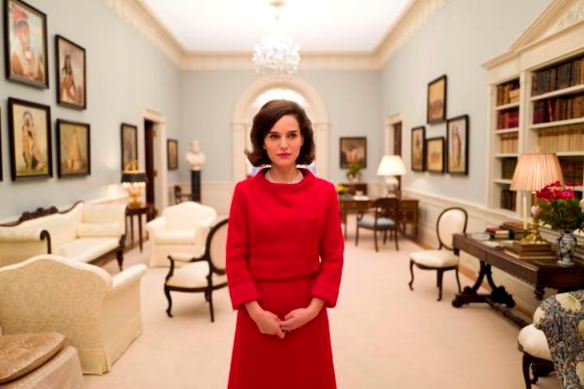 One of the most iconic women of the 20th century was Jacqueline Bouvier Kennedy Onasis. She epitomized elegance, grace, charm, culture and beauty in her era. To many, she epitomized the ideal of what a First Lady should be. Fiercely private, she rarely discussed her innermost feelings with anyone, even her most intimate confidantes. Riding in a motorcade in Dallas at her husband’s side, she would be the closest witness to one of the most singularly dramatic events of American history and yet she spoke very little about it after the fact.

This biopic mainly covers three separate events in the life of Jackie Kennedy (Portman); her 1961 televised taping of a personalized tour of the White House, for which she led an important restoration work; the assassination of her husband (Phillipson) and the events of the following week leading up to the funeral procession and an interview a week later with an unnamed journalist (Crudup) but who is mainly based on Theodore White of Life Magazine.

Portman nails her unique voice, a combination of New England patrician and breathy Marilyn Monroe sultriness. She portrays the First Lady as a woman knocked completely off-balance by the murder of her husband, and somewhat uncomfortable with the limelight. During the taping of her show, she is urged by her assistant Nancy Tuckerman (Gerwig) to smile which she does, somewhat shyly but she seems unsure of herself, as if she hasn’t quite memorized the lines she’s supposed to say. In the week following the assassination, she shows a hidden core of steel to Jack Valenti (Casella) who is LBJ’s (Lynch) chief of staff, as well as to her brother-in-law Bobby Kennedy (Sarsgaard).

She realizes her husband’s legacy will be incomplete and that if he is to have one, she will have to orchestrate it. It is she who comes up with the Camelot analogy, based on the hit musical of the time which she claimed her husband was quite fond of (and he may well have been – he never commented on it during his lifetime). While most believe that she made the reference off-handedly, the film (and writer Noel Oppenheim) suggest it was a deliberate attempt to give his presidency a mythic quality. If true, it certainly worked.

Portman is brilliant here; she is quite rightly considered the front-runner for the Best Actress Oscar and a nomination is certainly a lock. She has to tackle a great number of emotions; grief, frustration, anger, fear, self-consciousness – and hold it all under that veneer of charm and civility that Jackie was known for. The First Lady we see here is vastly different than the one that history remembers. In all honesty, who’s to say this version is wrong?

Larrain gets the period right from the fashions to the attitude of the people living in it. The Presidency at the time is not something that is bartered to the highest bidder; it is a position of respect that is won by the will of the people. The Kennedy clan understood that quite well and Larrain also understands it. The Presidency was held in a higher regard back then.

We get a Jackie Kennedy here who is much more politically savvy than history gives her credit for; she knows exactly what the right thing to say is and she holds herself in a way that reflects positively on her husband more than on herself. It is forgotten now but while her husband was President Jackie was considered to be a bit of a spendthrift. Much of her standing was achieved after she was no longer First Lady, but then an assassination of one’s husband will do that.

I do have a bone to pick with the film and that is its score. While the music of Camelot is used liberally and well, the score penned by Mica Levi is often discordant and sounds like it belongs on a European suspense thriller rather than a biography of the widow of President Kennedy. When the music becomes intrusive, it takes the viewer out of the film and that’s exactly what this score does; it gets the viewer thinking about the music rather than the film as a whole. Larrain also jumps around quite a bit in the timeline, showing the movie mainly as flashbacks and flash-forwards. It isn’t confusing so much as distracting and once again, the viewer is often taken out of the movie by being made aware that they are watching a movie. Good movies immerse their viewer and make them part of the experience and at times, this movie does. Then again, at times it does the opposite.

While this is essentially a biography, it is also very much conjecture. Most movies about the Kennedy assassination see it from the eyes of the President or from the witnesses; none to my knowledge have even attempted to view it through the First Lady’s perspective. I would imagine that largely is because we don’t know what the First Lady’s perspective was; she kept that well-hidden and knowing what I know about her, that isn’t surprising. I don’t know what she would have thought about this film but I suspect she would have been appalled by the rather graphic scene of her husband’s assassination and perhaps amused by what people thought she was thinking. I don’t know that Larrain and Oppenheim got it right; I suspect they got some of it right but we’ll never know. And perhaps that’s just as well; we need our myths to be inviolate. When Jackie, portrayed as a chain smoker here, icily tells the journalist “I don’t smoke,” when he wonders aloud what the public would think of her smoking, she’s making clear that she understands the need for mythological figures to be pure and that she has accepted her role as such.

Just as Lincoln, whose name is often bandied about in the film, belongs to the ages, so does John Kennedy – and Jackie as well. This is a strong film that your enjoyment of is going to depend a great deal on your opinion of the Kennedys to begin with. Some will be irritated that her carefully manicured persona is skewered here; others will be irritated that she is given a certain amount of sympathetic portrayal. In any case, anyone who loves great performances should make sure they see Portman’s work – it is truly worth the price of admission.

REASONS TO SEE: Portman gives a tour-de-force performance that is justifiably the odds-on favorite to win the Best Actress Oscar. The era and attitudes are captured nicely.
REASONS TO MISS: The soundtrack is annoying.
FAMILY VALUES:  There is some profanity and a scene of graphic violence and gore.
TRIVIAL PURSUIT:  Producer Darren Aronofsky (who at one time was set to direct this with Rachel Weisz in the title role) also directed Portman to her Oscar win for Black Swan.
CRITICAL MASS: As of 12/28/16: Rotten Tomatoes: 88% positive reviews. Metacritic: 81/100.
COMPARISON SHOPPING: 13 Days
FINAL RATING: 7.5/10
NEXT: Manchester by the Sea