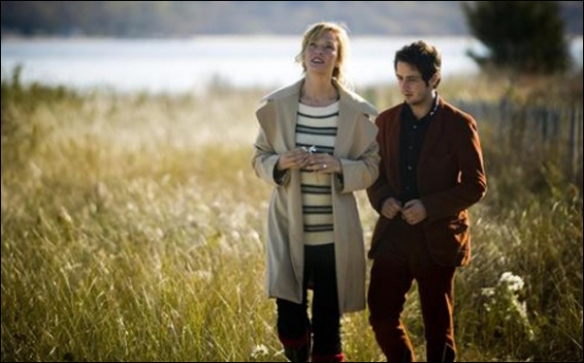 All that’s needed is a sexy R&B tune and you have a perfect romantic scene.

Sam Davis (Angarano) is an author of children’s books who, let’s face it, isn’t very good at what he does. His books are unnecessarily violent and profane and when he gives readings, only his pal Marshall (Thompson) is apt to show up and even that isn’t a given. Sam and Marshall have been squabbling of late and Sam decides to take Marshall out to a nice home out in the Hamptons to get away for awhile.

Marshall should have known that Sam was up to something. His ex Zoe (Thurman) is getting married to the egocentric and insufferable documentary filmmaker Whit Coutell (Pace) whose home it is they are going to and Sam intends to crash the wedding and win Zoe back. Marshall kind of goes along with this and Zoe certainly seems to be against the whole idea but Sam is nothing if not persistent.

Somewhat unbelievably, Sam is invited to stick around by the pompous Whit and sets out to win his girl back, despite the fact that on the surface they are far from suited for each other; Zoe towers over Sam, for example and is old enough to be his mom. However that’s just surface fluff; love goes much deeper than that and Sam is confident that Zoe will come around.

Different story for the rest of us. Winkler’s full-length feature film debut is unsatisfying on a lot of different levels. For one thing the characters here seem to be more of a collection of quirks and one-note characteristics – he’s suicidal, she’s a slut and so on and so on – and less genuine human beings who you would meet and want to hang out with. These are more like people who exist to advance a plot, or to provide elements of humor. Think of a film populated with sketch characters from the late-80s SNL and you get the idea.

Angarano has shown promise in movies like Almost Famous and more recently in The Forbidden Kingdom but hasn’t really fulfilled it yet. Like many young actors in Hollywood he is looking for that right role that will define him and push him up to the next level but to date he hasn’t found it yet. His character can be a bit overbearing and tends to pontificate and speechify more than speak. He’d be one of those cats you would never take on a road trip because you’d end up leaving him stranded at a truck stop or something.

Thurman seems to be slumming here. She’s a terrific actress who has come a long way since being know mainly for being beautiful (and she still is) but she’s acting in a different movie than everyone else here. I wish I’d been watching her movie; it seems far more interesting than this one.

Don’t get me wrong; this isn’t completely devoid of charm and there are some moments that are genuinely funny but not enough of them. I think Winkler was going for quirky in  a Wes Anderson kind of way and wound up being quirky in a Lars von Trier kind of way. The way that makes an audience stare longingly at the exit.

Winkler seems capable enough a director and visually this is a good looking film. I think he has some good films inside him but the Hollywood learning curve can be brutal. I hope he gets a chance to make those good films coz I’d hate for this to be his cinematic legacy.

WHY RENT THIS: Some funny moments.

WHY RENT SOMETHING ELSE: Characters tend to be one-note caricatures instead of three-dimensional human beings. Sam is annoying and borderline creepy.

FAMILY VALUES: There are a few curse words here and there, some sexuality and a bit of drug usage.

TRIVIAL PURSUIT: Winkler is the son of actor Henry Winkler, better known as the Fonz.

NOTABLE HOME VIDEO EXTRAS: A faux documentary by Whit is one of the features here.

BOX OFFICE PERFORMANCE: $22,270 on an unreported production budget; it’s extremely unlikely that the film was profitable during its theatrical run.

COMPARISON SHOPPING: Made of Honor