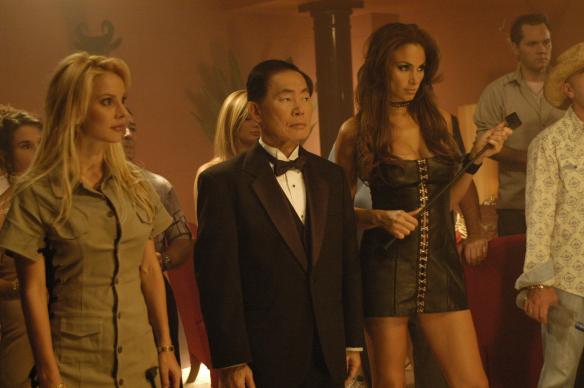 George Takei wonders how he got into this movie.

College these days is an expensive proposition and an Ivy League school like Harvard is nearly impossible unless your folks happen to have a spare million or two burning a hole in their pockets. For the rest of us, even if we have the grades and test scores to get in the very prospect of paying for a Harvard education is a daunting task.

That’s what Alex Sperling (Davern) is looking forward to. Fortunately, he has a summer internship set up that will help offset the cost but when that falls through, he looks to his fast-talking cousin Roger (Lillard) for help. Roger has been bragging about his successful aqua engineering business but as it turns out, Roger is a bit of a story teller – his business turns out to be pool maintenance in Los Angeles. As you might expect, Alex isn’t just disappointed – he’s furious.

Roger doesn’t want to let his cuz down however. A chance opportunity to housesit for a wealthy Beverly Hills client gives Roger a hare-brained idea – to turn the mansion into a brothel. He could – ‘scuse the pun – clean up and give Alex more than he needs for his tuition. Roger knows he can’t lose, particularly with Hollywood star Tom Arnold (himself) on his side.

If this kind of thing sounds familiar, it was old hat 30 years ago. Lillard is one of those character actors whose face you probably know well if not the name. He can do goofy but a little of it goes a long way and he’s a bit over-the-top here. So too is Efren Ramirez as an over-sexed gardener. However, they at least have some personality – Davern shows little here.

Like any raunchy sex comedy, there’s plenty of raunch – lots of women in various states of undress, the occasional boob, and I will say that the women in this film are as good looking as any as you’ll find in a single movie of this sort. For those looking for that sort of thing, you can’t go wrong here.

Unfortunately most of the rest of us want some comedy with our sex comedies and there is little of that to be found here. Most of the jokes are tired and/or fall flat. Some of that is performer-driven but much of it is that the jokes weren’t that funny to begin with. That’s not a good sign if you’re looking to laugh.

WHY RENT THIS: Plenty of gorgeous swimsuit-clad (and nude) bodies.

WHY RENT SOMETHING ELSE: Doesn’t add anything to the raunchy sex comedy genre. Not funny enough.

FAMILY VALUES: Plenty of raunchy humor, sexual content and nudity, some bad language and a bit of drug use.

NOTABLE DVD EXTRAS: There’s a virtual lapdance sequence (I kid you not).