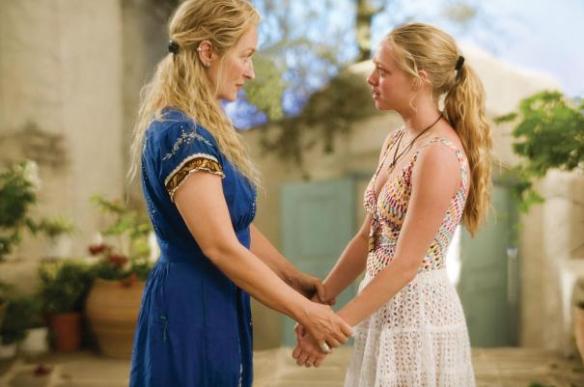 Blondes do have more fun, especially in the Greek isles.

I will admit it. I was a big ABBA fan in the 70s. Their influence can be felt in music today, from the alternative Swedish pop movement to the pop music of Rihanna and Lady Gaga. They were a phenomenon in their time, and despite the critical scorn heaped upon them, they actually wrote some pretty good music that stands the test of time.

That music also spawned a stage musical that has sold tens of millions of tickets all over the world. This is what is called a “jukebox musical,” one which is written around already established songs rather than having original songs. More on that in a moment.

Sophie (Seyfried) is getting married which is reason enough to rejoice. She is obviously deeply in love with Sky (Cooper), her fella but the one fly in the ointment is that she doesn’t know who her dad is. Her mom Donna (Streep), an ex-pop singer who has retired to the Greek Islands to run a taverna and raise a daughter on her own isn’t talking so Sophie resorts to reading her mom’s diary to find a clue and comes up with three possibilities; Bill (Skarsgard), an adventurer; Harry (Firth) a financier and Sam (Brosnan), a handsome guy.

Sophie invites all three to the wedding. It takes a little time for the boys to figure it out but eventually they realize that they could be daddy. In the meantime, Sophie tries to hide the three of them from her mom, who eventually discovers them. Not a happy surprise, let me tell you.

Mom has invited her best friends and bandmates Rosie (Walters) and Tanya (Baranski) more as moral support than anything else, but also so the three can perform at the bachelorette party for Sophie. However, the appearance of these three men has thrown Donna into turmoil, and Sophie is beginning to have doubts about her wedding too. Can love save the day?

If it can’t, ABBA certainly can. The music of the Swedish supergroup is infectious and uplifting; it’s hard not to crack a smile to songs like “Dancing Queen” and “Take a Chance on Me.” Director Phyllida Lloyd (who also directed the stage version) utilizes the beautiful Greek island landscape to further up the sunshine quotient.

Streep, who has sung onscreen previously in such films as The Prairie Home Companion and Silkwood, is the champ here. She belts out her tunes with confidence and aplomb and her rendition of “The Winner Takes it All” is a showstopper, one in which even the jaded movie theater audience applauded and cheered to. Certainly at home, you’ll feel goosebumps at the very least.

Unfortunately, not all of the cast fares quite as well. Firth has a pleasant enough voice and Seyfried is strong if not as gifted as Streep but Skarsgard is a much better actor than a singer and Brosnan…well, I like the man but his duet with Streep had me literally wincing. He can’t sing period.

Still, the singing and dancing is mostly okay, and is at least energetic if not always competent. While the acting performances are solid enough, if you’re going to cast a musical I think it’s wise to put people who can sing and dance in it; that is, after all, why we’re seeing the movie no?

Now about jukebox musicals in general; while they don’t disturb me in principle, they have an inherent flaw. Because the songs are already written, the plot must be written around the songs. In regular musicals, the songs are written to enhance and advance the plot; here the plot is set decoration to the songs. The story, which bears a remarkable resemblance to the 1968 Gina Lollabrigida movie Buona Sera, Mrs. Campbell (a fact that the makers of the musical have written of as coincidental) often takes twists and turns and careens right into the ludicrous.

Still, there is the kind of energy that makes you feel good just radiating from the film. Kudos have to be given to the producers and Lloyd for making the movie feel like a movie. Often stage plays that are converted to the big screen have a stagey feel to them, but the beautiful Greek backdrop lessens that to a large extent. You don’t ever feel like you’re viewing this over a proscenium.

However be warned; Lloyd’s decision to let all the actors do their own dancing and singing was a questionable one at best and if she was going to pursue that route, she should have damn well made sure that her cast could handle it. It’s not like there aren’t leading men out there who could have handled the singing and dancing (Hugh Jackman and Neil Patrick Harris anybody?) at least adequately. Still, you know what you’re going to get going in and if you’re an ABBA fan, this is heaven on earth. If you’re a movie fan…not so much.

WHY RENT THIS: Joyous and energetic; it’s hard not to be uplifted. Streep is a surprisingly strong singer and Seyfried became a star. Not as stagey as you might expect.

WHY RENT SOMETHING ELSE: Some of the singing and dancing is really, really bad. The plot is shoehorned in to fit the songs, rather than songs written to enhance the plot.

FAMILY VALUES: There are a few comments that are sexually-oriented but otherwise pretty harmless.

TRIVIAL PURSUIT: The film was the first to film on the new Pinewood 007 stage after the original had been destroyed in a fire.

NOTABLE DVD EXTRAS: There’s an interesting featurette on training the actors to sing, as well as a complete musical number that was cut from the final print (“The Name of the Game”). The Blu-Ray edition also includes the “sing-along” version (with lyrics subtitled during the songs) and Universal’s signature “U-Control” feature with picture-in-picture interviews and trivia. There is also a Gift Box edition that includes the soundtrack on CD as well as a nicely done booklet about the genesis of the film from on stage to on screen.

BOX OFFICE PERFORMANCE: $609.8M on a $52M production budget; the movie was a blockbuster.