What do you mean most adults aren’t idiots?

Most of us, growing up, have spent time watching movies aimed at kids our age at the time. Those movies were often over-the-top, always kid-centric and often portrayed the adults as essentially idiots whose sole purpose was to make our lives as kids miserable. These movies were mostly essentially meant to empower us, to give us the feeling that we could accomplish anything without the help of our parents. Mainly though we ended up learning that adults were not to be respected and that the only way to get things done properly was to do them ourselves.

The unfortunately named Cecil Stevens (Asadourian) has a lisp, which is not generally not a favorable condition when you’re in the fourth grade. Just saying his own name essentially paints a target on his back. Worse still his mom (von Oy) and dad (London) are having problems and have separated, forcing mom to take Cecil to his super hip grandma’s (Thoma) to live which means a new school. His new neighbor Abby (Campbell) who is also editor of the school newspaper tries to show her new friend the ropes but eventually she hits upon the solution – Cecil will just have to change his name.

Cecil is fine with that and even has a name in mind: Michael Jordan. Seeing as this is 1996, the new name brings Cecil great popularity and everyone wants to change their name to a celebrity. However, the unscrupulous principal (Walters) gets wind of the idea and decides that this is an ideal way to make the money to pay off the loan shark he owes money to, which has led him to cut school programs and funneling the money to the shark. When the newfound popularity goes to Cecil’s head, he is about to learn one of the great lessons of childhood – that actions have consequences.

Setting the movie in 1996, which was likely when the writer/director was experiencing the fourth grade himself, might have seemed a good idea at the time but in retrospect is a misstep; most of the age group this movie is clearly aimed at won’t have any memories of the nineties whatsoever. A more contemporary setting would have been a better idea.

The real problem here is that this is a movie that is severely dumbed down. There’s a whole lot of toilet humor and nearly every adult is an over-the-top caricature, the adult actors chewing scenery like living Cartoon Network characters. This makes the movie unwatchable for just about anyone who is older than seven or eight; even the fourth graders that inhabit this film would have rolled their eyes at this one.

Fortunately, the actors playing the lead kids – Asadourian and Campbell – acquit themselves surprisingly well. They get into their parts and even though they aren’t delivering naturalistic performances, the roles really don’t lend themselves to reality to begin with.

Parents may find the message to be a sound one but they likely won’t be willing to watch this one with their kids without some sort of distraction. Any kids movie which has the moms and dads whipping out the smart phone while the movie is playing is in big trouble.

REASONS TO GO: Asadourian and Campbell actually do a credible job.
REASONS TO STAY: Any viewer over the age of seven will end up being put off by this. The target audience won’t get the 90s references.
FAMILY VALUES: There is plenty of rude humor, adult buffoonery and some mild bullying.
TRIVIAL PURSUIT: The movie is loosely based on the director’s childhood.
BEYOND THE THEATERS: Amazon, Fandango Now, Google Play, iTunes, Vudu
CRITICAL MASS: As of 2/11/19: Rotten Tomatoes: No score yet: Metacritic: No score yet.
COMPARISON SHOPPING: Harriet the Spy
FINAL RATING: 4/10
NEXT: Book Club 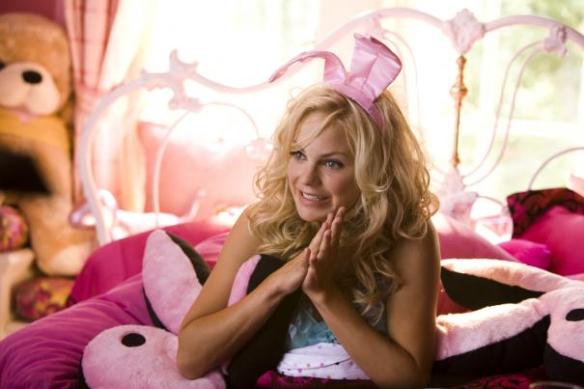 Sometimes we see our lives unfolding in a certain direction and we just assume that the course will remain the same eternally. However, life loves to throw us curveballs and it’s how we respond to them that really determines who we are.

Shelley Darlingson (Faris) is a Playboy playmate who has lived in the Playboy mansion for years but on her 27th birthday, she is unceremoniously booted from the mansion by Hef himself. She didn’t do anything wrong – it’s just that she had to make room for someone younger. Ah yes; 27 and over the hill. Life can be cruel.

She finds herself at a Southern California college with nowhere to go. Through convoluted circumstances, she discovers the Zeta Alpha Zeta sorority, the campus sad sacks whose charter is about to be revoked because they have grown so unpopular, managing to attract only outsiders and losers according to collegiate way of thinking.

She becomes the house mother and teaches the girls how to be popular, something Shelley knows a lot about – and how to attract guys, which is something else Shelley knows a lot about. She does makeovers for rebellious Mona (Dennings), too-smart Natalie (Stone) and even pregnant Harmony (McPhee) and body brace encumbered Joanne (Willis). As the girls begin to strut about in skimpy outfits and lots of make-up, the guys begin to flock to Zeta house, making the other sororities jealous.

In the meantime, Shelley falls for Oliver (Hanks) and discovers her methods won’t work on him. She needs to get herself edu-ma-cated and in a hurry. In that sense, Shelley needs a makeover of her own and soon discovers that popular isn’t everything.

This is from the writers of Legally Blonde and unfortunately in a lot of ways they’re repeating themselves, from the sorority culture of So Cal to the attention to fashion and popularity. This is essentially their take on Revenge of the Nerds complete with the girls dressing up as jocks and performing a song and a jealous sorority releasing a pig in their house. I don’t mind homages but this one borders on rip-off a little too close for comfort.

Faris is a terrific comic actress who unfortunately has appeared in a lot of really terrible comedies. I’m waiting for her to appear in something worthy of her talents but to date that hasn’t happened yet. She is the best thing about the movie, even though her performance is somewhat uneven by her standards. She certainly looks good in skimpy outfits.

The other gals fare unevenly, from solid to not so much. Stone and Dennings have gone on to better roles since then; Stone in particular shows lots of promise as a lead actress and Dennings is not far behind her. Hanks also has shown some potential, although neither he nor Dennings have gotten the vehicle yet that showcase it.

A note to dumbass film critics: because women dress provocatively or seem to like sex, it doesn’t make them whores. It makes them provocatively dressed. Women probably wouldn’t dress that way if they could be taken on their own merits instead of just their physical ones. The conceit of having the girls of the sorority dress provocatively to become more popular isn’t condescending or exploitative – it’s a fact of life. Does Hollywood contribute to this? Absolutely! But then I don’t happen to think it’s a crime for a woman wanting to be noticed or thought attractive.

Anyway rant aside this is a film that isn’t going to wind up on anybody’s best lists except for those who want to see Faris’ naked derriere. It has moments, but not enough for you to go looking too hard for this, although it’s relatively easy to find.

WHY RENT THIS: Clever concept. Anna Faris has her moments.

WHY RENT SOMETHING ELSE: Lacks execution – could have been a bit funnier. There are scenes lifted whole cloth out of other movies, particularly Revenge of the Nerds and Legally Blonde.

FAMILY VALUES: There is some sex-related humor as well as a bit of partial nudity, not to mention a bit of strong language here and there.

TRIVIAL PURSUIT: Some scenes were shot inside the actual Playboy mansion.

NOTABLE DVD EXTRAS: There is a music video.

BOX OFFICE PERFORMANCE: $70.4M on a $25M production budget; the movie was a hit.