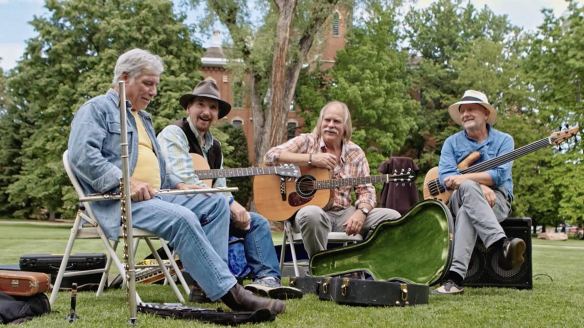 There is a time in our lives which we inevitably link with certain musical styles and sounds. It might be the psychedelic noise of the 60s, the arena rock of the 70s, the new wave of the 80s, the grunge of the 90s or…well, you get the idea. We identify with the music and the era.

In Boulder, Colorado in the early to mid-70s, particularly around the University of Colorado campus, the sound was heavily folk influenced with a kind of hippie aesthetic. Most symbolic of these bands was a group called Magic Music, who had enough facial hair to make a Muslim smile in satisfaction and an affinity for flannel shirts which would make the grunge generation scratch their heads and say “I thought that was our thing.”

Spoiler alert: the band never made it big, despite being hugely popular in Colorado and coming close on several occasions. Their unwillingness to bend on artistic matters as well as some self-torpedoing due to drugs, attitude or a distinct lack of business sense kept them from going to the next step. They broke up in 1975 with no records to their name.

One of their biggest fans was TV producer/writer/creator Lee Aronsohn who was attending CU as a sex and drugs major. He went on to success in his field but over the years the music he heard as a young man stayed in his head. He wondered what happened to the band that so inspired him in his youth. Only one of them remained in the Boulder era; Chris Daniels who continued to play music there with a new band. Through him, Aronsohn was put in contact with the remaining members of the band (Lynn Poyer tragically passed away in 2011) and soon a new idea germinated; to get the band to reunite onstage, playing a one night stand at the 800 seat Boulder Theater. To everyone’s surprise, the show sold out.

These are mostly interviews with the band members, former managers, girlfriends, wives, exes and fans. There isn’t any video footage of the band actually playing extant but there are quite a few still photos around and to Aronsohn’s delight some unreleased demos of the band in their heyday were found and used on the soundtrack. The demos accompany the stills, several of which have been animated into motion. That was a pretty nifty effect but as the story moves from the band’s past to the band’s present, those sorts of animations disappear from the film and I for one missed them.

The band utilized some sweet harmonies (think America and Pure Prairie League) with some fairly standard but lovely folk rock (along the lines of Buffalo Springfield and James Taylor). The music is extremely dated largely due to the lyrics which were of the tree-hugging variety (the band at one time lived in school buses in the Rocky Mountain wilderness) with a generous helping of hippie “love is everything” type sweetness.  Maybe a better secondary title for the film would be Smell the Patchouli!!

Which reminds me: why do non-fiction book authors and documentary filmmakers find it necessary to title their works with unnecessary and often unwieldy secondary titles? Every time I see a colon in a title I feel a sense of rage. Do these authors and filmmakers think that this kind of titling makes their work sound more academic? Knock it off, y’all. It just makes you sound pretentious.

Mini-rant aside, the filmmaking is pretty solid here. Yes, there are plenty of talking heads but for the most part the band members are charming and sweet-natured. While there were some rifts within the band, for the most part a lot of water has gone under the bridge; after all, there were more than forty years between live concert appearances. 40 years an bring an awful lot of perspective even to the most angry and bitter of feelings.

This is very much a niche film. Most people outside of Colorado and not of a certain age group will have never heard of the band and even those that do, not all of them are going to be all that interested in taking a stroll down memory lane. Still, the band’s reunion does have a pretty good emotional punch and if seeing retired hippie chicks undulating in time to the music is your thing, then there’s reason enough to go catch this in and of itself.

REASONS TO GO: The reunion scenes are pretty sweet. Early on I like what Aronsohn did with the motion stills.
REASONS TO STAY: This is really intended for a niche audience.
FAMILY VALUES: There is some profanity and plenty of drug references.
TRIVIAL PURSUIT: Aronsohn has been responsible for such hit TV shows as Two and a Half Men and The Big Bang Theory.
CRITICAL MASS: As of 8/4/18: Rotten Tomatoes: No score yet. Metacritic: No score yet.
COMPARISON SHOPPING: Searching for Sugar Man
FINAL RATING: 6.5/10
NEXT: Andre the Giant 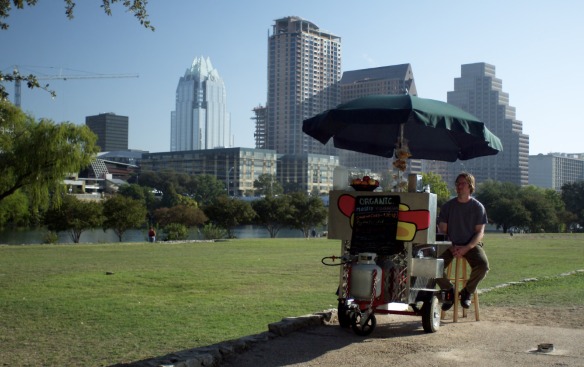 Paul Gordon ponders the difficulty in attracting a crowd to a quality product.

Bill (Gordon) doesn’t have a grand agenda. He just wants to serve good, healthy food from a food cart in his hometown of Austin, Texas. However, he is drowning in debt, mostly due to student loans accrued as a creative writing major at the University of Texas. When he goes to a bank to see about getting a loan to start up his business, he is met with a nearly laughable offer of $750.

He accepts it and sets out to buy provisions and find himself a cart, which he does – an aging hot dog cart from a suspicious guy who has a thing about hot dogs. While Bill isn’t particularly against hot dogs per se, they are not exactly in his immediate business model.

He finds himself a spot in an Austin park and promptly has a truly awful day. Most of the business he gets is from people looking for hot dogs and who aren’t particularly interested in something healthy and organic. He can’t even give the stuff away – he gives one person an eggless egg salad sandwich as a free sample and the guy takes one bite and throws it away. Eventually he meets Curtis (Doubek), a guy who hangs out in the park most of the day who genuinely likes his food. That gives Bill the incentive to come back the next day.

He meets Donnie (Mars), a cheerful self-promoting dope dealer who thinks that Bill’s idea is a good one. He sets up a delivery service and hands out flyers. Curtis even comes up with a name for Bill’s cart – the Happy Poet. Business begins to pick up.

Bill becomes infatuated with Agnes (Fisher), a pretty cubicle drone who finds his lunch cart and she begins to come by regularly. With Bill a bit too clueless to ask her out (despite Donnie’s threats to ask her out himself if Bill doesn’t), Agnes finally asks him if he wants to go bowling with her. The night eventually ends up at Bill’s place where he reads her some of his poetry – an excruciatingly bad vaguely sexual monstrosity called “Chasm.”

However things begin to go south. Despite the good business Bill is getting, he is giving away far too much product to people like Curtis and even to Agnes. He also has payments due on the cart and he is pricing his food too low for him to make sufficient profit. He soon runs out of money and is forced to sell hot dogs, much to the chagrin of his customers.

He also discovers that much of the success of his delivery is due to Donnie’s sideline of delivering pot with the food. The betrayal sends him into a downward spiral of self-doubt and depression. Donnie feels bad about it and when it is discovered that Curtis has a little secret he’s been keeping from his friends, change is in the wind.

This is the kind of movie that doesn’t have to shout to be heard. It is low-key and quiet, getting under your skin rather than in your face. Director/writer/actor/editor/sandwich maker/truck unloader/generally in charge of a lot of things guy Gordon delivers his lines in a flat Midwestern monotone, a cross between Steven Wright and Bob Newhart. This really helps with the development of the character as a bit of a doormat. In fact, the title is very ironic since Bill is neither happy nor much of a poet (which he, in a moment of self-awareness, confesses to Curtis).

Donnie is very much the anti-Bill in the movie; loud where Bill is quiet, aggressive where Bill is passive and self-aggrandizing where Bill is self-effacing. In that sense, Mars and Gordon make a really good team, near-opposites that help create quite a unit. Doubek also does some pretty good work as the enigmatic Curtis.

Fisher does a great job as Agnes. She’s like so many young women out there; decent, giving but having to navigate a relationship that is a bit weird. There is a sweetness to the relationship between Agnes and Bill that flavors the whole movie with a subtle but intoxicating spice.

Austin is a good location for the movie. It’s an arts-favorable city with a hip, sophisticated young citizenry (many involved with the university or state government) and a thriving music scene. It’s a great place to live and the movie showcases that aspect of it.

I’m not really big on vegan and vegetarian food but I found myself kinda hungry for it afterwards; I’m not sure whether that’s attributable to Gordon’s skills as a filmmaker or a chef (I’m more inclined towards the former though). I also really appreciated the movie’s charm, slow pace and understated humor. The Happy Poet is not necessarily for those who limit their comedies to things like The Hangover or Judd Apatow’s movies (and their many clones) but for those who appreciate a quiet, reflective chuckle it is quite ideal. Do I get the free veggie chips with that?

REASONS TO GO: Gordon’s deadpan delivery contrasts nicely with Mars’ frenetic one. Charming story and a cast whose performances are as organic as the food.

FAMILY VALUES: A good deal of drug humor and some drug use, mild sexuality and a little bit of language.

HOME OR THEATER: Worth seeking out on DVD.

TOMORROW: Made in India