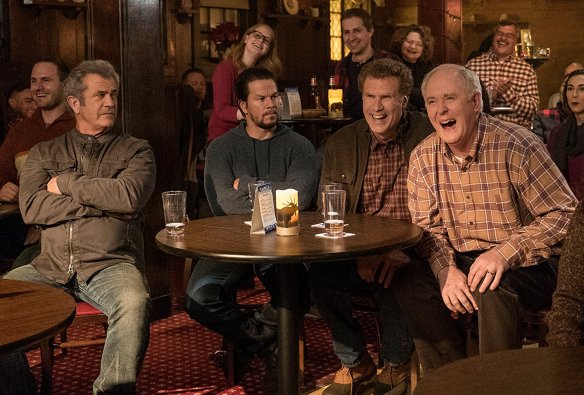 A boy’s night out isn’t necessarily meant for all boys.

In our modern age, children often have more than one father or more than one mother (and occasionally both). Marriages don’t last a lifetime as they did back in the day. Sometimes having more than one pair of hands can be helpful. More often though things just get confused.

Co-Dads Brad (Ferrell) and Dusty (Wahlberg) have patched up their differences and are humming along as a unit; Dusty has found his inner touchy-feely guy and Brad is still dangerous around power tools. Christmas is coming and rather than bounce from house to house, the two have decided to have one massive Christmas celebration, a “together Christmas.” The prospect is exciting but for the advent of…the granddaddies.

Dusty’s dad Kurt (Gibson) is a womanizing ex-astronaut who looks at his son’s new-found soft side about the same way a steak lover would look at maggots in his filet. He is convinced that Brad is emasculating his son and seeks to drive a wedge between the two of them. At the same time Brad’s dad Don (Lithgow) has arrived with his love of improv comedy and enough hugs to give Richard Simmons diabetes.

With the kids undergoing crises of their own and Sara (Cardellini) – Dusty’s ex and Brad’s current wife – showing justifiable jealousy over Dusty’s new girlfriend, the extremely sensuous best-selling author Karen (Ambrosio) and this family is a Christmas meltdown waiting to happen.

Like the first film, the comedy is strictly hit or miss with the edge going towards the latter. However, the sequences that work will induce plenty of laugh-out-loud guffaws in all but the most jaded of audiences. However, most audiences will also experience extended sequences of dead silence, possibly punctuated by an occasional groan or eye-roll.

The chemistry between Ferrell and Wahlberg remains pretty strong; adding the two veterans Gibson and Lithgow to the mix doesn’t appear to affect it much. Lithgow however is in top form, hitting a comedic stride that actors who specialize in comedic roles might envy. I found myself grinning every time Lithgow was onscreen; even though Don is a bit of a one-note character, Lithgow keeps that note fresh and sounding clear as a bell throughout.

Some critics have expressed absolute disgust that Gibson was cast at all. I have three words for them; Let. It. Go. You’re talking about events that happened 20 years ago when Gibson was a raging alcoholic. Yes, I get that he said some absolutely detestable things but his career was effectively derailed and by all accounts he’s sober at the moment. Do people have to pay for their mistakes the rest of their lives or do we forgive them and move on at some point?

The subplots involving the children seem to be aimed at an entirely different audience and the movie could have easily done without them. And not for nothing but the juvenile actors here give performances that can only be deemed as “excruciating.”

It also should be said that none of the women in the film – and there aren’t many – have any character development to speak of. All of that is reserved for the men. Make of that what you will but personally think the filmmakers could have spared a little bit of time to allow us to get to know Karen and Sara a little better.

Mainly this is adults behaving badly and at times the film descends into shtick and cliché. There are enough funny moments to balance that out for the most part but generally speaking, Daddy’s Home 2 left me with absolutely no desire to check out a third film. I suspect I’m not alone in that regard.

REASONS TO GO: Lithgow is hysterically funny here. There are some pretty decent laughs here and there.
REASONS TO STAY: None of the female characters are developed at all. The kids are extremely annoying.
FAMILY VALUES: There is a bit of profanity and some sexually suggestive material.
TRIVIAL PURSUIT: Although Gibson plays Wahlberg’s father in the film, in reality Gibson is only 15 years older than his onscreen son.
CRITICAL MASS: As of 1/16/18: Rotten Tomatoes: 19% positive reviews. Metacritic: 30/100.
COMPARISON SHOPPING: Daddy Day Camp
FINAL RATING: 6/10
NEXT: Small Crimes

Martin Csokas looks forward to his next movie My Dinner with Denzel.

We go through our lives essentially just hoping to mind our own business. We don’t want to get involved nor do we get involved with anybody else. However, sometimes there comes a time when a situation demands our action.

Robert McCall (Washington) lives a quiet life as a clerk at a home improvement store (think Home Depot with a different color scheme). He is helping his buddy Ralphie (Skourtis) lose weight and prepare to apply for a security guard job, a definite upgrade in pay.

But he is reluctant to talk about what he used to do. He has insomnia and spends a lot of nights at an all-night diner, drinking tea from tea bags he brings himself and reading novels off the list of 100 books you must read before you die (he’s up to 91). He compulsively rearranges the silverware on the table and always sits at the same one – yes, he’s OCD.

He also strikes up a conversation with Teri (Moretz), a prostitute from Russia who aspires to greater things. He encourages her and provides a welcome breath of fresh air from all the men who just want to use her for sex – or profit by her. He witnesses her pimp Slavi (Meunier) slapping her around but doesn’t intervene when she asks him not to. Slavi’s muscle (Veadov) gives McCall a card so that he can come and collect a more amenable girl.

When Teri ends up in the hospital, McCall pays Slavi a visit. You see, McCall isn’t just a guy that works at a hardware store. He’s got skills. Some big bad ones. And he puts them to good use. This doesn’t sit well with Slavi’s bosses who happen to be the Russian mob and they send a fixer of their own (Csokas) to deal with him and quite frankly, he’s got mad skills himself.

The film is based on an 80s TV show that some critics characterize as forgotten although I remember it quite well – if for nothing else for its catchy Stewart Copeland theme song which sadly isn’t in the movie. There are those who will remember that English actor Edward Woodward starred in the title role as a former British spy who turns his talents to helping the powerless surmount impossible odds. It also reunites Fuqua and Denzel who teamed together so well for Training Day.

This is a good fit for Denzel, who has the best dead eye look in Hollywood. He has mastered the technique of using his good looks as a facade, hiding something deeper – sometimes sorrow or pain, sometimes rage or evil. McCall has plenty of history behind him and it shows in Denzel’s eyes – but there is also a coldness there when Denzel switches it on, the coldness of a trained killer.

He will be 60 later this year and joins the trend of sexagenarians invigorating their careers and becoming action stars (see Neeson, Liam) and let’s be frank; he looks damn good doing it. A couple more roles like this and Sly Stallone is going to be putting him on speed dial for The Expendables 6. The fight scene in Slavi’s office is as good as many action film climaxes and the climax here in the Home Depot clone is frankly incredible. While McCall leaves a few traps, mostly he uses the various power (and non-power) tools to great effect so this doesn’t sink into a Home Alone parody. No, the scene is gritty, violent and occasionally gory.

This is essentially entertainment for its own sake. There are really no deeper meanings here – everything is visceral. You don’t have to interpret different levels, just sit back, turn off your mind and enjoy the carnage. While I enjoyed the action sequences themselves, they don’t really blaze any new trails but they take existing ones and pretty them up a bit. If you’re looking for mindless fun, this is your ride.

REASONS TO GO: Denzel still has it. Terrific climax.
REASONS TO STAY: Kinda formulaic.
FAMILY VALUES:  Lots and lots of violence, some of it rather bloody. Also plenty of foul language and some sexual references.
TRIVIAL PURSUIT: With almost no backstory for the character of McCall, Washington came up with some of the items including the character’s Obsessive Compulsive Disorder.
CRITICAL MASS: As of 10/6/14: Rotten Tomatoes: 61% positive reviews. Metacritic: 57/100.
COMPARISON SHOPPING: The A-Team
FINAL RATING: 6.5/10
NEXT: This is Where I Leave You