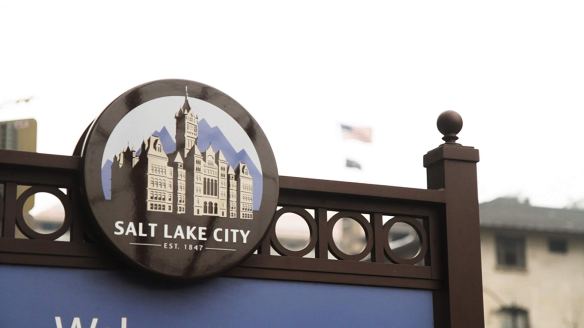 In 2015, same-sex marriage was made legal throughout the United States, ending a fight which had been escalating over the past…well, going back to the Stonewall Riots. It marked a sea change in American attitudes towards its LGBTQ citizens as popular support for the cause grew.

One of the first salvos fired in the battle for marriage equality took place in Utah. Amendment 3, which had been approved by 66% of the predominantly Mormon voters and approved by the Church of Latter-Day Saints itself (albeit only tacitly). Mark Lawrence, a middle-aged gay man who had moved to Utah from San Francisco to care for his ailing father, had always regretted not marching for AIDS when he lived in the Bay Area in the 80s. He felt moved to do something about what he considered a morally objectionable law – and thought that if he sued the State of Utah, he would have a reasonable chance of winning on constitutional law grounds.

But nobody wanted to help him do it. Inexperienced in activism and fundraising, he founded the group Restore Our Humanity for the purpose of fundraising for the lawsuit, and set out to find someone to help set it up. He was met by stony resistance from all of the national organizations he contacted; most felt that in a state as red as Utah there was absolutely no chance they could get the law overturned. At last, he found a small law firm who was willing to take on the case, and a lawyer named Peggy Tomsic who was willing to take it on – which meant not only taking on the State of Utah but by extension, the Church of Latter-Day Saints as well (the film takes the stance that the Mormons largely control the state from a political angle – many of the state legislators are Mormons, so they do have a case).

It would turn out to be one of the first cases to be tried in a federal court on the subject of same-sex marriage and the State of Utah, feeling that they not only had the will of the people behind them but also the full force of the law, were unprepared when the judge ruled in favor of the plaintiffs; they were so confident in their chances that they did not have a Stay of implementation writ ready to go on, which is common practice in suits like this. Seventeen days would go by with hundreds of same-sex couples receiving marriage licenses before a stay was finally filed.

But the fight was only beginning. There was an appeal to be filed and there would be in-fighting between the legal team, the plaintiffs (which couldn’t be Lawrence since he wasn’t in a relationship at the time) and Lawrence, who eventually dissolved the organization he founded to fight Amendment 3 and said disconsolately afterwards “If I had to do it all again? I probably wouldn’t have.”

The filmmakers tell the story of the lawsuit pretty well. There is a good deal of archival footage, promotional footage from the Church of Latter-Day Saints (they declined all interview requests they received from the filmmakers) and talking head interviews. Some of the footage is chilling, such as the Mormon elder who gives his approval to someone beating up a gay man, or the repeated insistence that they have nothing against gay people and that it’s not personal, but…y’all are perverts and you need to get out of Salt Lake, pretty much.

This is very much an underdog story and it is viscerally pleasing from that point of view. Lawrence is an interesting enough subject but he can be abrasive and the filmmakers shift their focus from him to lawyer Peggy Tomsic who as a lesbian definitely had skin in the game; she had a long-time partner and the two of them were caring for a small boy that they couldn’t legally adopt because of their marital status (or lack thereof) and were well-aware that he could be snatched away from them at any moment. Her story really shows the casual cruelty, the true evil, of the stance that those proponents of the gay marriage ban took. As Tomsic says, as much as they claim it is about the welfare of the children, at the end of the day it is not because keeping kids out of a stable home with two parents benefits nobody.

The story is a fascinating one, but it is a very locally-oriented one and the documentaries that focused on the fight for marital equality on a national level will probably hold more interest. However, for those looking to dive deeper on how that came to happen against what some thought were nearly insurmountable odds, could find this worth a look.

REASONS TO SEE: Concise storytelling.
REASONS TO AVOID: Territory covered on the national level more effectively.
FAMILY VALUES: There are some adult themes and some profanity.
TRIVIAL PURSUIT: The film was a Special Jury Award winner at the 2018 American Documentary Film Festival.
BEYOND THE THEATER: Amazon, AppleTV, Hoopla, Vudu
CRITICAL MASS: As of 1/22/20: Rotten Tomatoes: No score yet: Metacritic: No score yet.
COMPARISON SHOPPING: The Case Against 8
FINAL RATING: 6.5/10
NEXT: The Happy Prince