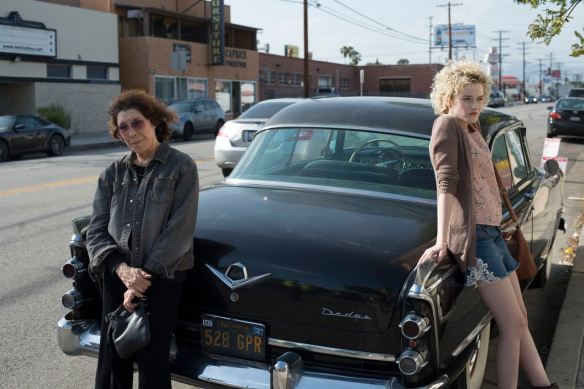 Something new and a couple of classics.

The thing about families is that there is often baggage. Even the most seemingly loving family has a few skeletons lurking in the most inaccessible of closets. When a family appears to be dysfunctional, it is often with good reason.

Elle Reid (Tomlin) is a once respected poet who has fallen into irrelevance. She has spent the morning breaking up with her much younger lover Olivia (Greer). On the surface, Elle seems to be hard-hearted, even cruel, dismissing Olivia with a “You’re a footnote,” referring to her own partnership of 38 years which ended a year and a half ago when her partner passed away.

It is an inopportune time for a visitor but one arrives; her granddaughter Sage (Garner) who is desperate and scared. You see, she’s pregnant, wants an abortion and her somewhat irresponsible boyfriend (Wolff), who was supposed to come up with half the money but failed. Now Olivia needs $600 and has just nine hours to get it.

So Elle pulls off the dust cover off of her 1955 Dodge Royale (which is actually Tomlin’s car by the way) and heads out to find the money for her granddaughter. You see, Elle is broke for the moment; she does have money coming in from a speaking engagement but it won’t arrive for a couple of weeks and the $40 that she has is not nearly enough so it’s off to see some of Elle’s friends, most of whom turn out to be as broke as she is or as unreliable.

As the money proves to be more elusive than Elle imagined, she is forced to turn to people in her life that she would rather not have to owe, like Carla (Peňa), the bookstore owner who once expressed interest in some of Elle’s first edition feminist literature, like Betty Friedan’s The Feminine Mystique. It goes from bad to worse, as she is forced to go hat in hand to her ex-husband (Elliott) whom she unceremoniously dumped when she came out as a lesbian but more terrifying still, the prospect of asking help of the one person she actually is intimidated by – her own daughter Judy (Harden), Sage’s mom who is not only a lawyer but a force of nature.

Elle is an acerbic curmudgeon who isn’t easy to get along with, but as we see the layers peeled away we see that like many of that nature there’s a good deal of vulnerability just below the surface. While I’m not sure if the role of Elle was specifically written for Tomlin it may as well have and she comes through, big time. This is a performance that is going to be remembered and I don’t just mean during awards season; she is almost assuredly going to get an Oscar nomination for this but even more importantly this is going to be one of the performances that defines her career (Nashville is the other and yes, this is at that level).

Although the focus is primarily on Tomlin as Elle, this is by no means a one woman show. Elliott turns in one of the finest performances of his distinguished career as the tough guy veneer he has worn like a comfortable old Stetson falls away and we see his pain in his one extended scene with Tomlin. Harden, one of the most reliable actresses in Hollywood and a former Oscar nominee herself, does some fine work as well.

Garner must have looked at this cast with wide eyes, but the young actress holds her own. In fact, she thrives. It really is nice to see three actresses of differing generations given such meaty parts to work with in the same film and to have all three hit it out of the park is icing on the cake. Anyone who likes to see terrific acting performances will no doubt be drawn to this movie. This is definitely a film aimed at women although it isn’t exclusively a woman’s film. It does present the point of view of a lifelong feminist however, and that’s a POV that is sadly lacking in Hollywood these days, comparatively speaking. It’s also good to see that in a modern movie as well.

Then there’s the abortion. It is treated very matter-of-factly without much fanfare. It is simply a part of what is happening. Certainly those who are strongly pro-life will likely take issue; as the movie gathers steam in the Oscar sweepstakes I wouldn’t be surprised to see some cries of outrage on the right about “Liberal Hollywood” (cue eye rolling here). I found the movie to be somewhat low-key in its treatment of the subject; the fact is that abortions are legal and young Sage is doing nothing illegal here. This isn’t a movie about abortion, but the subject plays an important role here, and not just Sage’s procedure. I’ll be counting the days until this becomes a cause célèbre but until the protesters show up at the theaters I would strongly urge you check this out, particularly for Tomlin’s performance which is one of the best you’ll see this year.

REASONS TO GO: Lily Effin’ Tomlin. Great cast. Short but bittersweet. Realistic relationships and characters.
REASONS TO STAY: Occasionally quirky for quirk’s sake. Pro-life sorts may find this offensive.
FAMILY VALUES: A fair amount of cussing and a bit of drug use.
TRIVIAL PURSUIT: This is the late Elizabeth Peňa’s final film appearance.
CRITICAL MASS: As of 9/21/15: Rotten Tomatoes: 92% positive reviews. Metacritic: 78/100.
COMPARISON SHOPPING: The Thing About My Folks
FINAL RATING: 8.5/10
NEXT: The Transporter Refueled