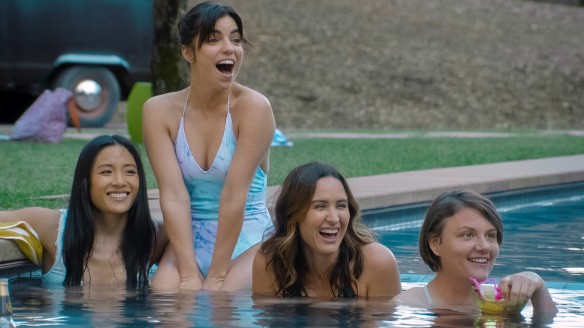 Girls just want to have fun…and talk about their feelings.

Ah, the orgasm. One of life’s few pleasures we don’t have to pay through the nose for. Perhaps for that reason, men chase orgasms like they get a sizable gift card at Bass Pro Shops if they catch them. As for women..Well, read on dear reader.

A group of old friends are gathering at a rented home in California’s Wine Country to celebrate the upcoming marriage between Andi (Wu) and Lu (Trimbur). Gathered there ar Andi’s best friend and sole male Josh (Fadem), filterless chef Regular Helen (Mainard), Lu’s sister Nikki (LaMarque) who is straight and enduring marital issues that her sister doesn’t know about, YouTube singing sensation Karin (Tatoyan) and Vivien (Parks) for a weekend of drinking and partying in general.

As it sometimes happens when old friends get plastered things bubble up to the surface. It turns out, Lu has never experienced an orgasm, something that sends Andi’s confidence plummeting. Andi wonders if there’s something wrong with her, if Lu doesn’t find her attractive, if she is truly making Lu happy. As the weekend continues, all of the women will find their own issues coming to the fore but surrounded by friends, what could go wrong? Welllllll…

Very often Hollywood tends to give the lesbian community short shrift, relegating them to supporting roles or comedy relief. Very rarely are any films told from a lesbian point of view even in independent films as this one is. While it may seem to be aimed at the Lesbian filmgoer market at first glance, The Feels actually can and should be assimilated by any audience. This is a very accessible film.

The problem here is that the premise turns into a soap opera by the middle of the film and drama is manufactured rather than earned. While early on there is legitimate conversation going on, characters get to speechifying as the movie progresses. I understand that much of the dialogue was improvised; that may not necessarily be a bad thing but things feel forced in places. I think the film would have benefited from more established dialogue.

Also to the negative side, the movie is interrupted periodically with bizarre interview/confessional sequences as the characters talk about their first orgasms and other milestones in their sexual past. One of them drops the bomb of sexual assault in her confessional but the movie just glosses over it as if it didn’t matter. Now I understand these sequences were completely improvised but ignoring something like sexual assault is the wrong thing to do, particularly given the current atmosphere. Maybe the filmmakers are trying to get across the point that the sexual assaults of women are generally turned a blind eye on by society but I don’t think this is the way to do it. Either it shouldn’t have been mentioned or it should have been discussed. The one thing a film mainly by women shouldn’t do is ignore a mention of sexual assault. Of course, I might be overreacting a tad but I think it’s important.

To the positive side, the cinematography is beautiful and the actresses here seem genuine particularly stand-up comic Mainard who brings most of the comedy here. Her character is so likable and refreshing that I wanted to spend more time with her than any of the other ladies which isn’t to say that the actresses aren’t interesting but their characters don’t feel all that well-developed. One gets the sense that the cast was working with the outline of an idea rather than anything fleshed out. I have some pretty interesting friends and we’ve had some amazing discussions but gathering them for a weekend to talk about life and sex and turning the camera on them wouldn’t make a very good movie. Sadly, this one didn’t either although there were some things worth checking out – just not enough for me to recommend it much.

REASONS TO GO: It’s refreshing to see lesbians given the front and center of a film.
REASONS TO STAY: Despite their best intentions the story turns into a soap opera in the end.
FAMILY VALUES: There is a fair amount of profanity, some drug use and some sexual content.
TRIVIAL PURSUIT: The ensemble of actresses are close friends in real life.
BEYOND THE THEATERS: Amazon, Fandango Now, Google Play, iTunes, Vudu, YouTube
CRITICAL MASS: As of 4/12/18: Rotten Tomatoes: No score yet: Metacritic: No score yet.
COMPARISON SHOPPING: The Big Chill
FINAL RATING: 5/10
NEXT: Florida Film Festival coverage continues