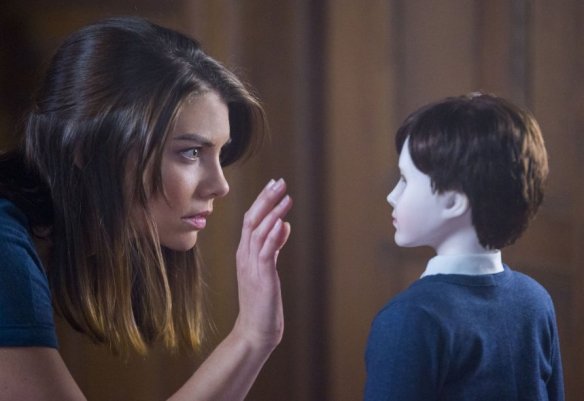 Greta tries to get Brahms to give her a high five.

When you hire someone to watch your children, you are in effect hiring a security guard for your most precious item. Sadly, we rarely think of it that way and so often we leave our children in the care of people who we know nothing about.

Greta Evans (Cohan) is one such person. She’s an American in a small English country town having applied to be a nanny for Brahms Heelshire (Klyne) who lives on an isolated estate for a mysterious reclusive family. Papa Heelshire (Norton) and his wife (Hardcastle) are leaving on a well-needed vacation and they need someone to look after Brahms.

Greta has a bit of a past; she is on the run from an abusive boyfriend (Robson) and is looking to start over someplace where she can make new memories and at first it seems this situation is perfect for her. Then she meets Brahms and discovers that Brahms is a little bit different than most boys; he’s a porcelain doll.

At first she thinks it’s a joke and then when she discovers from flirtatious grocery delivery man Malcolm (Evans) that Brahms died in a fire nearly two decades ago (there are flame marks on the facade of the mansion) she feels some sympathy for the Heelshire clan. But she is given a long list of rules to follow; she must play music loudly for the doll, read stories to it in a loud clear voice. She must dress it and undress it and kiss it goodnight when she puts it to bed.

At length the rules and the weirdness of the situation begin to get to her. She begins to willfully disobey the rules but then strange things start to happen. She hears noises in the night, and a childish voice seems to speak to her. Then she notices that the doll isn’t always in the same position that she left it and items of her clothing begin to disappear.

She begins to wonder to Malcolm whether or not she is going crazy. She wonders if her ex has been paying her a visit. She also wonders if It might not be that the doll is actually alive – and little Brahms is, as his father so eloquently put it – still with her.

This has been marketed as a horror film but that’s not quite accurate; this is more of a thriller with supernatural overtones. There is a twist near the end and while I admire the spunk of the writer for going that way, it doesn’t really suit the film especially after what transpires in the first hour. Bell has fashioned a kind of Gothic atmospheric ghost tale, with a spooky mansion, things that go bump in the night and inanimate objects that move by themselves. The creepy factor is sky high.

Also sky high is Lauren Cohan’s potential as a leading lady. The Walking Dead star plays a much different role here and fans that only know her as Maggie are going to be a little discombobulated by the change. Greta is a bit less self-sufficient, a little more timid. She is not the sort of woman who takes charge and kicks ass, although when backed into a corner she comes out fighting. I can’t think that this will be her last shot at movie stardom; she has what it takes to be a huge star.

There are a couple of scary moments but the end of the movie is pretty disappointing from the standpoint that as imaginative as the first half of the movie is, the ending just seems to have been purchased at a Hollywood screenwriter surplus store. Endings are a very hard thing to write but this one feels a bit forced to say the very least.

I don’t mind stories that lead you one way and then go another; those can be quite delightful but when the way they were leading is far better than the destination they end up at it can be a problem. The movie looks like it’s going in a supernatural ghost story direction – and the filmmakers are building up a lovely mood without going overt on the special effects scale – and then end up doing an abrupt right turn and going in a more visceral rather than atmospheric direction. I ended up feeling like I’d invested so much into the first half that I left the film feeling a little cheated.

REASONS TO GO: Cohan has serious lead actress potential.
REASONS TO STAY: Creepy rather than scary.
FAMILY VALUES: There are some scenes of terror, a little bit of violence and some adult themes.
TRIVIAL PURSUIT: Most of the film’s exteriors were shot at Craigdarroch Castle in Victoria, British Columbia.
CRITICAL MASS: As of 2/1/16: Rotten Tomatoes: 19% positive reviews. Metacritic: 42/100.
COMPARISON SHOPPING: The Quiet Ones
FINAL RATING: 5/10
NEXT: Diablo