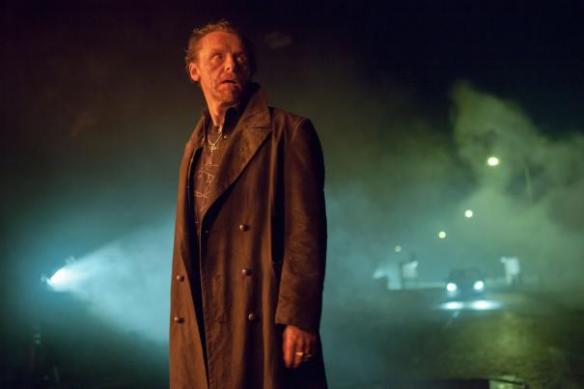 Gary King (Pegg) can relate. Just out of school, he was King Gary, the guy all the guys wanted to hang out with and be like, and the guy all the girls wanted to be with. He and his four best mates – Andy Knightley (Frost), Oliver “O-Man” Chamberlain (Freeman), Steven Prince (Considine) and Peter Page (Marsan) – were inseparable. They even attempted the legendary Golden Mile – 12 pubs in their hometown of Newton Haven in a single night. They failed but during the course of the evening Gary managed to make out with Oliver’s sister Sam (Pike) and have the best night of his life. It was 1990, the millennium was ten years off and music was awesome – Madchester was in full glory and so was Gary in a black leather trench coat.

The trouble is that we don’t stay young forever. 1990 passed into history and it’s almost 25 years later. The lads have moved on and become middle aged men but Gary hasn’t changed much. He’s an alcoholic who has turned from the guy boys want to be like and girls want to be with into the guy men want to be the opposite of and women want to be miles away from. He still is as inconsiderate and selfish as ever, and his ego is bigger than Tommy Lee’s libido.

The failure to complete the Golden Mile has gnawed at him over the year and finally he gets the notion to get the old gang back together, head over to Newton Haven and do the Golden Mile up properly – and finish the job this time. Of course the others are reluctant but Gary is persuasive and manipulative and uses his charm (and a few outright lies) to get them to go.

At first when they get down to it, things are a little awkward. The boys – now men – don’t have a lot to say to one another. But as the pints begin to flow, things loosen up and soon it’s like old times. They’re laughing, recalling past triumphs (and embarrassments) and generally remembering why they were mates in the first place.

But their old times were never like this. There’s something strange going on in Newton Haven and the lads have stumbled into something out of a John Wyndham nightmare. The bonds of their friendship will be tested as Gary’s obsession to finish the Golden Mile may just get them all killed.

Wright, Pegg and Frost have developed a cult following through their collaborations Shaun of the Dead and Hot Fuzz. This is the third in what they call the Cornetto Three Flavour trilogy – so named for a British ice cream treat that figures in each of the movies. Each of the films stands alone and concerns completely different characters and genres but the results have been hilarious and this one just might be the best of the lot.

Part of what makes the movie work is the easy camaraderie between the five main characters. You can easily believe that they’ve been mates for a good long while. They do take the piss out of one another quite a bit which is what good friends do (when they’re male) but the affection is genuine.

There are plenty of special effects and while they aren’t of the hundred million dollar budget variety, they are better than average and don’t take you out of the movie. In fact, compared to some of the movies this past summer with plenty more money to spend, the effects were even superior.

If I have any criticisms it’s with the middle third which tends to drag a little bit. Once the third act kicks in, the action is rip roaring. In a summer blockbuster season which has to be classified as disappointing in terms of quality, The World’s End stands out head and shoulders above the rest as the best film of summer 2013.

REASONS TO STAY: Runs a bit long in the middle section. Awkward in places.

FAMILY VALUES:  A whole lot of bad language, some sci-fi action, some sexuality and a couple of disturbing images.

TRIVIAL PURSUIT: The sign on The King’s Head features a portrait of director Edgar Wright, sitting in for a royal.

COMPARISON SHOPPING: This is the End