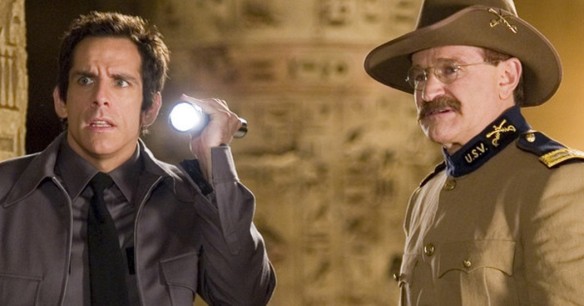 Even Ben Stiller’s flashlight isn’t enough to make up for the light that left us when Robin Williams passed away.

Some movies can be extremely poignant and bring a tear even to the most heartless of people. Sometimes movies are lent extra poignancy by real life circumstances.

Things at the Museum of Natural History in New York City couldn’t be going better. They’ve added a brand new planetarium and opening night is a dazzling affair. Larry Daley (Stiller) has set up quite the soiree with President Theodore Roosevelt (Williams), Attila the Hun (Gallagher) and Sacajawea (Peck) leading the way, along with some animated constellations and Trixie the T-Rex. However, things go terribly wrong; Attila and the Huns (sounds like a great name for a garage band) attack indiscriminately, Teddy reads lines from his nephew Franklin and the exhibits who have come to life basically aren’t acting like themselves.

Ahkmenrah (Malek) whose tablet possesses the magic to keep his son living, discovers that the tablet is corroding somehow but it seems to be tied in to the issues that the exhibits are having. He isn’t quite sure why it is corroding now nor how to stop it; the one who really knows about the tablet is his dad Merenkahre (Kingsley) who happens to be in the British Museum.

So it is that Larry heads to London, taking with him Akhmenrah and Teddy – as well as Sacajawea, Attila and the tiny cowboy Jebediah (Wilson) and Roman legionnaire Octavius (Coogan) and Dexter, the mischievous Capuchin monkey. They seek out dear old dad who tells them that the tablet needs moonlight in order to recharge; like a battery, the tablet is corroding. Seems a simple enough fix.

Of course not. The vainglorious Sir Lancelot (Stevens) has seen the magic properties of the tablet and figures out that this is the Holy Grail he was sent to find and he can thus bring it back to Camelot and claim Guinevere to be his very own. The rest of them need the tablet to continue being reanimated at night; without it they’ll be permanent wax figures and thus the chase is on with the stakes being incredibly high.

I haven’t had a real love affair with this series but neither have I particularly hated it either. All three of the movies in the franchise I have found to be competently done entertainment. Many critics have lamented the waste of talent and I can’t say as I don’t disagree but for what the film is intended to be, it is successful.

There are moments that are the highlights of the series, as the penultimate scene that takes place on the roof when Dexter is stricken. There is some real tenderness in that moment and when Dexter whimpers it was a real shot to the heart and some of the more tender-hearted kids in the audience reacted so you might want to be sure your kids can handle an animal in distress, or the grieving that comes with impending loss. Other moments of grace include bringing back the trio of security guards (Van Dyke, Cobb and Rooney) who initiated the events of the movie originally.

There are also moments that remind me why I never warmed to the series in the first place, like Larry having a conversation about parenting with Laa (also Stiller), a caveman who seems to understand what Larry is saying but through a much simpler filter. Also Dexter saves Octavius and Jebediah from a lava flow in Pompeii by relieving himself on the lava – and on the figures. Nice.

While the chemistry between Owen Wilson and Steve Coogan is genuine, the same is not true for the rest of the cast. Mostly it seems very much like a paycheck rather than a passion project and for good reason. As much as the highbrow aim is to educate as well as entertain, they really don’t do very much of the former whenever they have a chance for the latter. And there’s nothing wrong with that, but when the humor is as unmemorable as the humor is here, there’s a problem. Rebel Wilson, for example, who plays an oversexed and dimwitted British security guard, is utilized poorly.

There is a vibe of finality to the film which isn’t entirely due to the movie itself; the passing of Williams and Rooney adds to that feeling. We are in essence saying good-bye to both of them which adds to the poignancy of the final scenes. While I was entertained in places and touched in others however, the movie isn’t cohesive enough to really keep my interest for the full length of the movie. Like an under-powered train chugging into the engine with its fuel exhausted, the franchise barely has enough in it to make it through the shortest running time of any of its films. Worth seeing? More or less but more to say goodbye to two of the greatest to ever walk onto a sound stage than for anything onscreen.

REASONS TO GO: Very touching in some places, especially on the British Museum rooftop. A nice way to say farewell to Mickey Rooney and Robin Williams.
REASONS TO STAY: Pretty generic and bland. Humor is of the lowest common denominator sort.
FAMILY VALUES: There is some mildly foul language, a bit of peril and some humor of the pee-pee doo-doo kind.
TRIVIAL PURSUIT: The role of Nick (Larry’s son) was played by Jake Cherry in the first two films; Gisondo plays him here.
CRITICAL MASS: As of 12/30/14: Rotten Tomatoes: 47% positive reviews. Metacritic: 47/100.
COMPARISON SHOPPING: Mannequin
FINAL RATING: 6/10
NEXT: Force Majeure 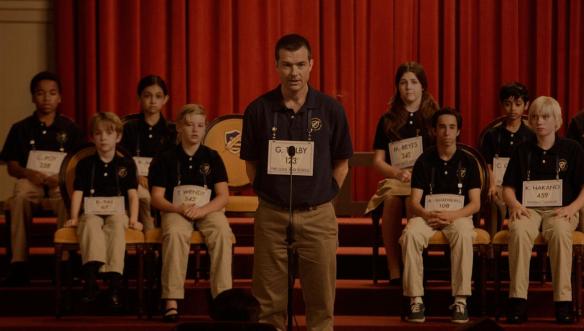 I’ve been sitting in front of my laptop screen, trying to come up with a way to start this review. I couldn’t think of anything pithy or wise, so I just thought I’d cheat and lead with how I couldn’t come up with a lede.

Cheating though is something Guy Trilby (Bateman) is not above. At 40 years old, he’s had an unremarkable career as a proofreader with one somewhat quirky but useful skill – an eidetic memory that allows him to remember how every word he sees is spelled.

An indifferent student who never passed the eighth grade, Guy discovers that there’s a loophole that would allow him to enter the Golden Quill National Spelling Bee. Parents are aghast at the 40-year-old man entering a competition meant for children. Dr. Bernice Keagan (Janney), the President of the Golden Quill foundation that runs the Bee, is just as aghast and tries to figure out ways to get Trilby out. The founder of the Golden Quill, gruff academic Dr. William Bowman (Hall) is also appalled, particularly since this is the first year that the Bee will be televised nationally.

Intrepid reporter Jenny Widgeon (Hahn) wants to get to the bottom of what is motivating Guy but instead winds up in the sack with him…more than once. The only one who seems to be making any headway with him is Chaitanya (Chand), a 10-year-old competitor who has been ostracized as nerd his entire life. Like most people, Chaitanya seems to bring out a testy, vulgar response in Guy but for whatever reason he is able to make friends with the 40-year-old man. However, they are still competitors and at least one of them will do whatever it takes to win.

Bateman takes over the director’s chair for the first time in his career and the result is pretty impressive. It doesn’t hurt that he has to work with one of the 2011 Black List screenplays (an annual list of the best unproduced screenplays to that date). He also gets one of the better nice guys in Hollywood and managed to talk him into an unlikable role. I hear he has an “in” with the star.

This is a vulgar, vulgar film with every profanity you can imagine, some of them hurled loose by kids. There is a good deal of sexuality as well including some fairly frenetic sex scenes with Hahn screeching “Don’t look at me!” at Bateman as they copulate. People who are easily offended with foul language and sexuality should be warned that there are plenty of both here.

But beyond that, this is a comedy that hits the funny bone with a sledgehammer. Da Queen almost bust a gut laughing. However, I do have to admit that the kids drove me crazy. Even the one playing Chaitanya, who was better than most of the rest of them, occasionally would get on my nerves, sounding whiny which is the way to get on my nerves the most quickly.

That aside, this is a very funny comedy which may be a bit too mean for some. Certainly the critics have been making mean remarks about it – which I suppose under the circumstances is understandable. If I were you though, I’d ignore those critics and go check it out on your own and make your own opinion.

REASONS TO GO: Hysterically funny. Bateman does a terrific job.

REASONS TO STAY: Chand gets a little whiny in places. May be too raunchy for some.

FAMILY VALUES:  A surfeit of expletives, some brief nudity and plenty of sexual and crude content.

TRIVIAL PURSUIT: Much of the filming took place at the Sportsman’s Lodge in the San Fernando Valley. 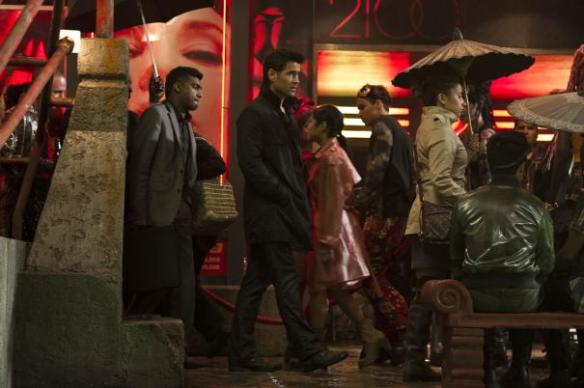 A man goes into a shop to buy two weeks worth of memories and discovers that he is not who he thinks he is. In a dystopian future, he races to find out who he really is despite being hunted down by government storm troopers and his own wife, who is trying to kill him. Sounds like the divorce is going to be real final. Not precisely a remake of the 1990 film but one that intends at least to be more true to the original Phillip K. Dick novella “We Can Remember It For You Wholesale.”

Beasts of the Southern Wild

(Fox Searchlight) Quvenzhane Wallis, Dwight Henry, Levy Easterly, Lowell Landes. A young girl in an isolated Louisiana community cut off from the rest of the world by a gigantic levee deals with her father’s potentially mortal illness, believing that nature is in balance with the rest of the universe. When a terrifying storm changes that perception, the girl believes that putting the world back into balance will save her town from sinking into the bayou and cure her father. A huge hit at Sundance earlier this year.

(20th Century Fox) Zachary Gordon, Steve Zahn, Devon Bostick, Rachael Harris. Greg Heffley and Rowley Jefferson, the middle school misfits of the first three movies, find themselves embarking on what promises to be what they were most terrified of. The Worst. Summer. Ever.

Rating: PG (for some rude humor)

(Millennium) Cillian Murphy, Sigourney Weaver, Robert De Niro, Elizabeth Olsen. A veteran team of paranormal debunkers take on Simon Silver, a legendary psychic who has come out of retirement after 30 years with an agenda that remains unclear. They see to prove that this charismatic showman is nothing but a fraud – and wind up taking on much more than they could have bargained for.