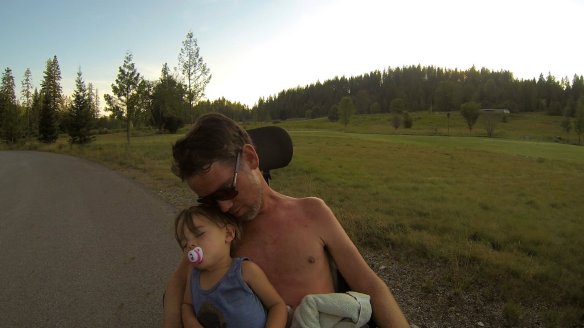 Steve Gleason was a football player. Although a star linebacker in high school and again at Washington State, he was considered undersized and the NFL essentially turned their back on him. Unwilling to give up, he went to the Indianapolis Colts’ training camp only to be let go. Then, he joined the practice squad of the New Orleans Saints and there was something about the way he played, the way he left it all out on the field on every single play that impressed the Saints coaching staff. They signed him up and he played in NOLA for seven years as a part of the special teams unit, which takes the field for kickoffs and punts.

As a Saint, he was responsible for one of the most memorable moments in team history. On September 25, 2006, the Saints took the field at the Louisiana Superdome for the first time in 21 months after Hurricane Katrina devastated the city, the stadium and the team. In the first quarter with their opponents the Atlanta Falcons punting, Gleason broke through and blocked the punt which was recovered in the end zone by teammate Curtis Deloatch for a touchdown. The play brought the stadium to its feet and the city to its knees in joy. It was a symbol that not only were the Saints back, so was the city of New Orleans. They would go on to have the best season in team history to that point.

Although Gleason retired the season before his team won the Super Bowl, the respect his teammates and the organization had for him was such that he was given a Super Bowl ring but that was shortly after the devastating news that he had been afflicted by Amyotrophic lateral sclerosis (ALS), more popularly known as Lou Gehrig’s disease because it was this that felled the Yankees slugger. Six weeks after the diagnosis, his wife Michel discovered she was pregnant.

Knowing that by the time his child was cognitive it was extremely unlikely he would be able to communicate as ALS attacks the neurons that control the involuntary muscular system, affecting the ability to move, speak, eat and eventually, breathe. He decided to make a series of video blogs for his child, a son named Rivers who would be born in October 2011. He would try to give his son advice about life, death, the difference between right and wrong and the importance of never giving up – things important to him but also things any father would want to pass on to their son.

]Using this footage as a backbone, documentarian Clay Tweel (Make Believe and Finders Keepers) was given extraordinary access, documenting the ex-football player’s physical progression as he is ravaged by the disease, as well as the toll it takes on his family. Wife Michel is forced to be caregiver to Steve while also being a new mom; eventually the strain overwhelms her and they add a neighbor (and self-described “hero worshipper”) Ryan Gootee to do the heavy lifting. His indefatigable attitude mirrors that of Steve himself at times.

And don’t get me wrong, Tweel absolutely refuses to paint the ex-Saint as a saint. There are times that he is literally howling in anguish at the betrayal of his body (even simple bodily functions become logistical nightmares). There are particularly heart-wrenching moments when Steve confronts his dad Mike, a genial guy but a rock-ribbed Christian whose beliefs are very much different than his son’s; in fact, Mike as a strict enough parent that his son had some resentments that percolate and bubble over while we watch (perhaps feeling a bit like voyeurs as we do) and one where he and his wife have a late night argument when she is clearly exhausted.

Gleason also is dedicated to his foundation, Team Gleason which not only helps fund ALS research but also provides the technology to ALS sufferers who can’t afford it to have more productive, fulfilling lives as well as providing “bucket list” items that patients are on a sort of deadline for; think of it as a Make-a-Wish Foundation for ALS patients making sure that they get what they need and what falls through the cracks of their insurance and government assistance. In fact, Gleason’s foundation spearheaded legislative efforts to help ALS patients get the technology they need covered under insurance and Medicare. It’s a worthy and noble cause but Gleason’s devotion to the foundation sometimes seems to supersede his dedication to his family, which disturbs Michel no end.

This is a movie that touches the human spirit and makes one proud of the species, something awfully difficult to do sometimes when all you see on the news are terrorist attacks, political hackery and mass shootings by disturbed loners with AR-15s. While I get that some critics will grouse about this being manipulative, holy crap if a story like Gleason’s can’t get to you emotionally, you really have to be something of a sociopath. Of course it’s manipulative. EVERY story is. That’s the nature of stories, particularly the true ones and this one is almost mythic in some ways when it comes to the courage and drive to live that Gleason displays and the support his family and community gives him. Personally, I thought Tweel gave a very balanced presentation of Gleason’s story, but if I’m to be manipulated, this is the way I want it to be done. At least it is emotion genuinely earned, as is the respect you’ll feel for the Gleason family and their supporters.

REASONS TO GO: There are few films that are this inspiring and uplifting. It never pulls its punches, showing Gleason’s vulnerabilities and at times, failings. Tweel keeps the talking head footage to a minimum. Cinema verité at it’s very finest.
REASONS TO STAY: At times, the film may end up being a bit too emotionally raw for some viewers.
FAMILY VALUES: There is enough foul language to net this an “R” rating.
TRIVIAL PURSUIT: Although Gleason played seven years in the NFL, he was never drafted – he signed on with the Saints as a free agent. However, he was drafted by the short-lived XFL’s Birmingham Thunderbolts as the 191st player picked in their one and only draft in 2001.
CRITICAL MASS: As of 8/30/16: Rotten Tomatoes: 96% positive reviews. Metacritic: 80/100.
COMPARISON SHOPPING: Pride of the Yankees
FINAL RATING: 10/10
NEXT: Florence Foster Jenkins